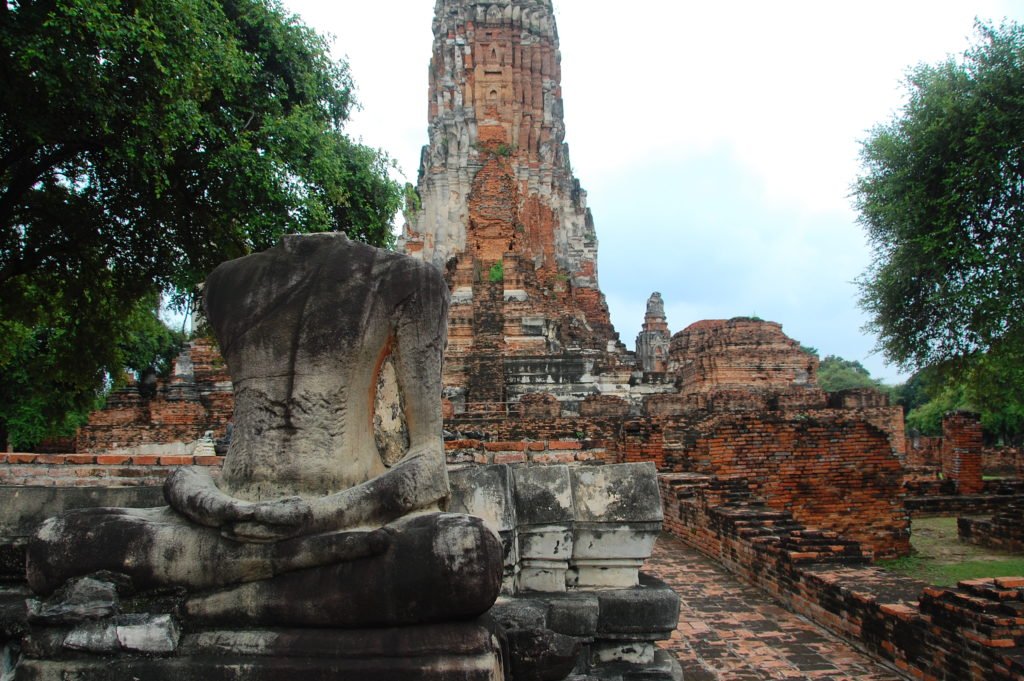 We travel to learn and discover new things. For instance, until recently, I didn’t understand why there were so many headless Buddha statues in Ayutthaya, Thailand. In fact, many Buddha statues throughout Southeast Asia seem to be missing their heads. Why?

More on that in a moment.

I love the overnight trains in Thailand.

As Paul Theroux frequently commented, train travel is just inherently romantic. I sat on my northbound train from Bangkok to Ayutthaya silently watching rice paddies, mountains, and dreamy Thai landscapes float by. The few aging, open-air train cars that survived in Thailand are a throwback. Green smells of life and jungle drift in through the giant window as the gentle swaying and click-clack make eyelids heavy.

On overnight trains, I always book one of the top bunks which resemble an airplane’s luggage compartment. They’re hardly designed for my 73-inch height, so I spend the night in fetal position. Still, there’s something comfy about being secure in a top bunk and occasionally waking up from the clank of an additional car being added to our train at one of the stops.

After an overnight train from the south of Thailand where I left my favorite island and a quick train change in Bangkok, I was deposited just outside of Ayutthaya, a historic city just a few hours north of Bangkok. 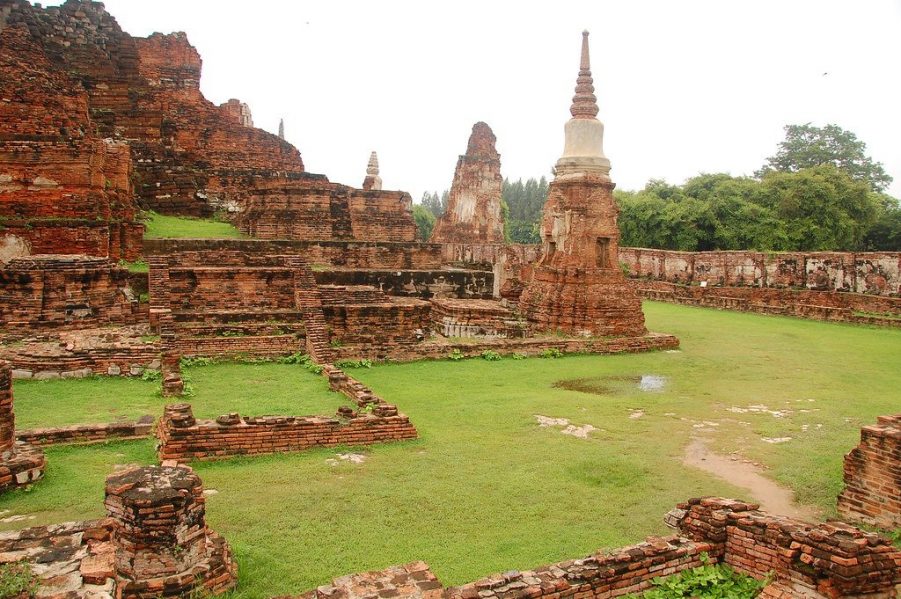 The Ancient Capital of Ayutthaya

Ayutthaya is one of Thailand’s ancient capitals. From 1351 to 1767, the fortified city was considered to be the most powerful in Southeast Asia. Elephants walked the wide streets, and life was generally good for the Kingdom of Siam. That is, until the Burmese, after hundreds of years and many attempts, finally managed to breach the city and burn it to the ground.

Nothing ruins a good thing like having your women carried off, men slaughtered, and capital city sacked. I know what you’re thinking, maybe that’s what happened to the missing Buddha heads in Ayutthaya, but hold on.

At the same time Ayutthaya was falling, on the opposite side of the world, America was toying loosely with the idea of kicking out the British and becoming independent.

Rather than pick up the pieces, the Siamese chose to start all over with a new capital in the south: Bangkok. Canals were dug to create a more defensible island, and the Grand Palace was replicated downstream. Even bricks from the original Grand Palace in Ayutthaya were salvaged and floated on barges down the Chao Phraya River for the project.

Not that I know much about medieval warfare, but how the Burmese got inside Ayutthaya to destroy it, I will never understand.

Ayutthaya is a perfect square, surrounded on all four sides by an elephant-proof moat. It’s a very formidable and defensible place to build a city. When the Burmese invaders took over Ayutthaya, a slaughter ensued. Even though both factions shared the same religion (Theravada Buddhism), temples and Buddha statues were either damaged or destroyed — a terrible loss for all of humanity.

At first, I assumed all the headless Buddha statues in Ayutthaya were because of this attack, but as I learned later, that isn’t the case.

After arriving in Ayutthaya, I used my compass to figure out which direction the old part of the city lay, walked briskly out of the train station past all the offers from tuk-tuk drivers, and crossed the muddy river by ferry.

In my opinion, modern day Ayutthaya isn’t much to look at. I walked into what was, at first glance, a traffic-infested sprawl. After dropping my stuff at a budget hotel, it only took one stroll for me to start to appreciate the place more. Unlike many ancient cities, modern Ayutthaya is literally built directly on top of the old. Ancient, Angkor Wat-style ruins are practically everywhere you look.

I saw signs advertising new models of mobile phones bolted to 1,000-year-old brick walls. The irony. The handmade bricks were probably baked by forced laborers back then who had no idea their creations would one day help advertise something unfathomable at the time.

Today, a Dairy Queen stands on one of the same streets that elephant-mounted warriors once patrolled.

After visiting a small museum in town and seeing a model of the old capital, I realized the streets were basically the same today as they were 700 years ago. I can only imagine the archaeological wonders—both discovered and destroyed—that were revealed as a modern city was constructed.

Everywhere you look there is some reminder of how you are surrounded by ancient history. As a citizen of a not-so-old-country (the USA), I was conditioned to think something 100 years old was ancient and worthy of preserving. But in Ayutthaya, things are much older. 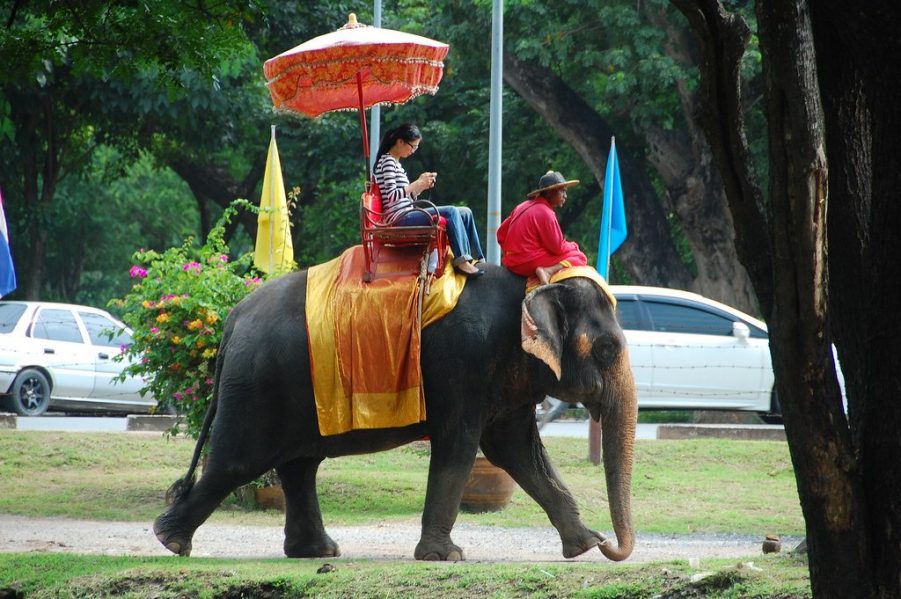 Today, the elephants still walk the streets of Ayutthaya. But instead of warriors on their backs, they carry something far more dangerous: camera-wielding tourists with silly grins on their faces.

Now days, the only time someone should be on the back of an elephant is when it’s part of a responsible conservation effort. Thailand stopped using elephants for logging and construction a few decades back. Hundreds were put down because of the upkeep; an adult elephant can eat up to 600 pounds of food a day!

But that is no longer the case. The new generation of elephants are only there to serve the tourism industry, and their treatment is often questionable. Riding elephants in most places around Southeast Asia now supports an industry not driven by the animals’ best interests. Do some research before deciding if that photo of you on top is worth it. 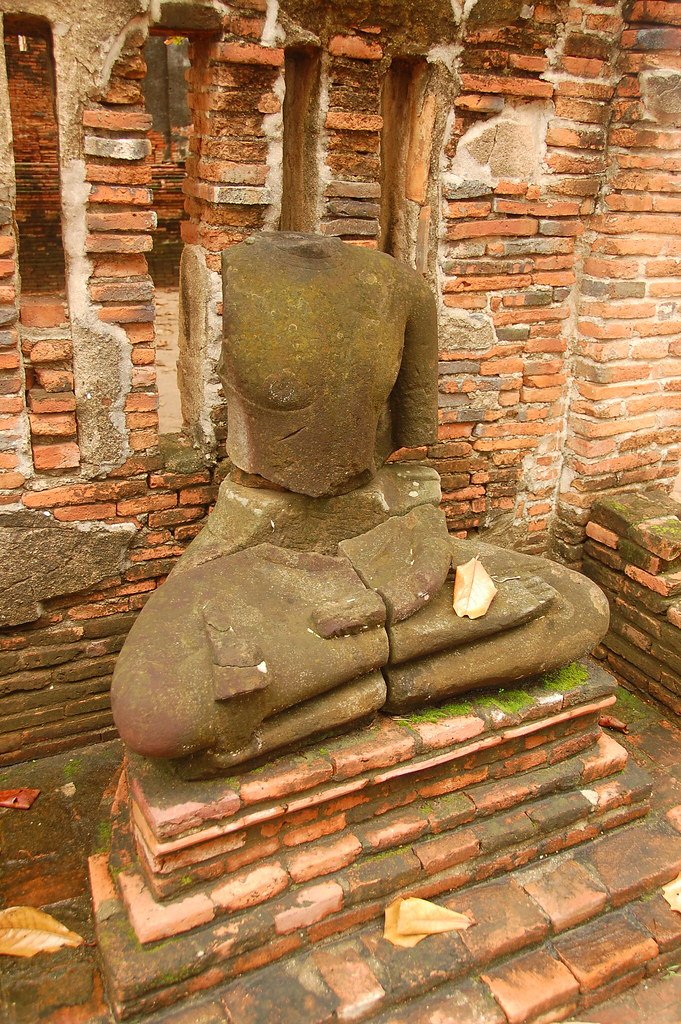 There are so many ruined sites around Ayutthaya that you can easily find yourself wandering alone at the lesser-known temple sites, surrounded by ancient walls and bas reliefs carved into stone. Without the distraction of other tourists or touts selling things, you can better absorb what you see.

As I explored the many temple ruins around Ayutthaya, one ubiquitous theme kept popping up. With only a few exceptions, every single surviving Buddha statue among the hundreds still standing was missing its head. After speaking to several Thai guides and the museum curator, I was pretty disappointed to find out why there were so many headless Buddha statues in Ayutthaya:

Most of the Buddha statue heads had been lopped off by looters and sold to private collectors from the United States and Europe.

Collectors hope we think the headless Buddha statues are simply the unfortunate result of history. But the truth is, a thriving market and global demand exist for antiquities such as these Buddha statue heads.

The Case of the Missing Buddha Statue Heads

So the Burmese weren’t to blame after all. This piqued my interest, so I reached out to an archaeologist.

Although some of the Buddha statue heads from Ayutthaya are lost forever (maybe they’re hidden in millionaires’ basements?), many of the heads have actually been discovered in popular museums in the United States.

When Thailand asked for this important part of their heritage back, they were refused. The museums paid good money for the Buddha heads from Ayutthaya and don’t want to give them back. I keep this in mind now every time I see impressive Buddha statue heads in Western museums.

I saw many Buddha statue heads on a recent visit to the Art Institute of Chicago, my favorite art museum in the United States. Of course, I have no way of knowing how the heads ended up there, or from whom they were acquired. But I have to wonder if I saw any of the matching bodies for these heads while traveling in Ayutthaya, Thailand.

Strolling through the crumbling ruins of a great ancient civilization was humbling. Seeing every single religious image sat meditating in decapitated silence was saddening. And for what end? Profit. The Christian equivalent would be chopping the head off of Christ the Redeemer in Brazil—a statue not nearly as old—and selling the thing to a museum in Paris or New York!

Then, when Brazil asks for it back, the museum tells them “no.” 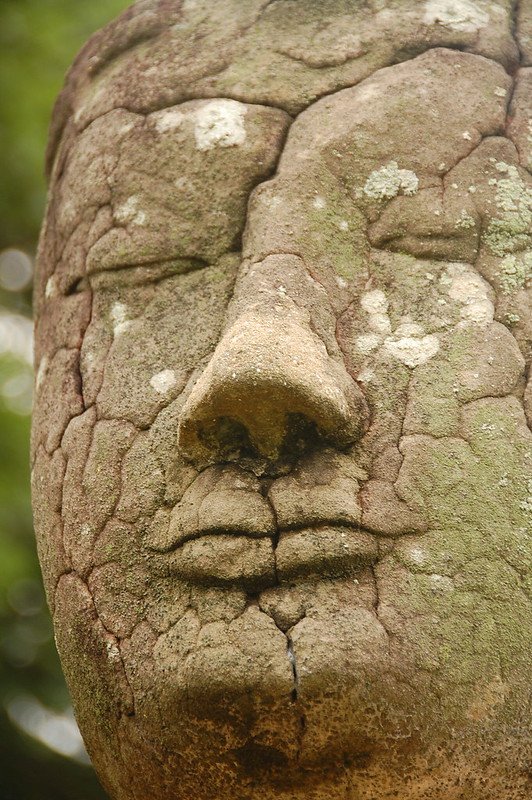 The Famous Buddha Head in a Tree

One Buddha head in Ayutthaya did miraculously survive and has become a famous landmark often seen on postcards. A tree sprouted nearby and grew to engulf a Buddha statue. Over centuries, the sandstone body was crushed into dust by roots, but for some reason, the tree did no damage whatsoever to the Buddha head.

The head is now literally an inseparable part of the tree—fascinating! Looks like nature helped Ayutthaya protect at least one of the precious Buddha heads after all, and I’m happy I was blessed to see it. 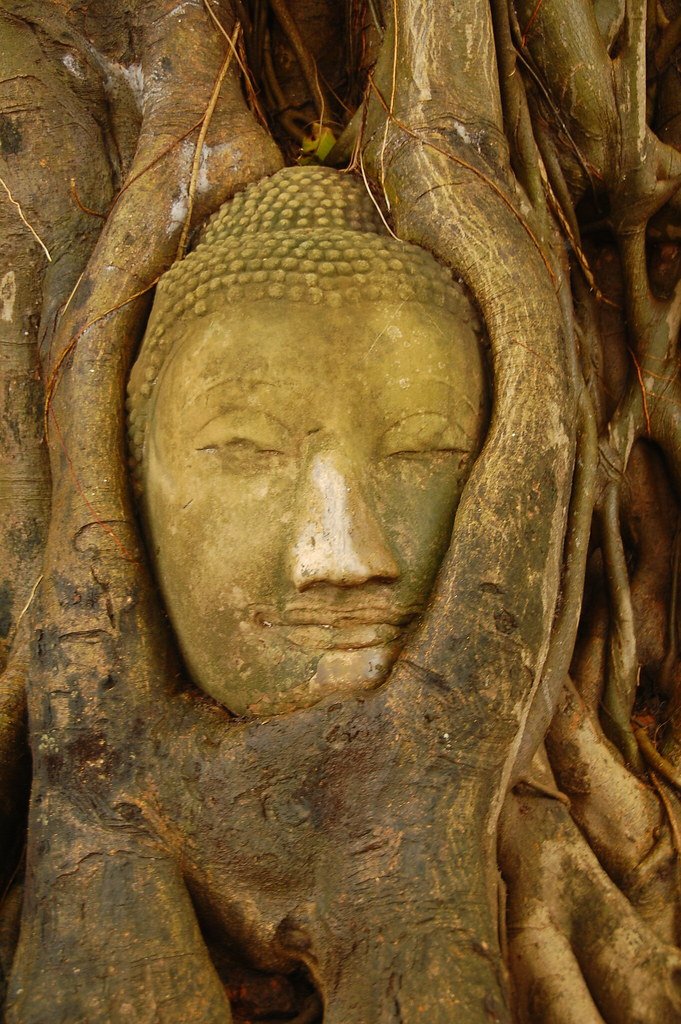 Previous Post: Interview with Nik Halik the Thrillionaire
Next Up: Backpacking in Vietnam: A Summary