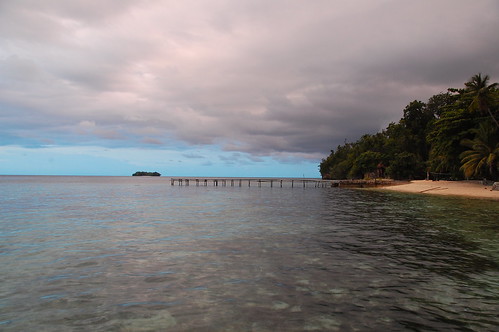 Getting off the Togean Islands was a little easier than getting to them.

A speedboat took me to the dock where I caught an overnight ferry back to Gorontalo. Overnight boats, buses, and trains are the best because you save the money on that night’s accommodation and wake up where you want to be.

According to the crooks at the bus station, I “just missed” the last bus, but lucky for me there was a private car loaded with locals also making their way north for almost the same price. With a flight waiting for me, I had little choice and climbed inside. For eight long hours we twisted and turned along Sulawesi’s winding roads. The back of the car was full of stinking durian fruit and the woman sitting behind me was filling plastic bag after plastic bag of vomit, then slinging them out the window just past my face at oncoming traffic.

The fruit (you have to smell it to believe it) smelled so bad in a hot car that I couldn’t tell where the durian smell stopped and the vomit smell began. Needless to say, it was a long ride.

Right before dark, I was dropped into the big city of Manado which is easily walkable. I checked into a disgusting hotel for $10 a night and treated myself to an extremely rare meal of KFC for dinner. I know, I know….I’m such a bad traveler — let the guy-from-Kentucky jokes begin.
The next day I went to the airport where I was faced with two challenges. First, I had to beg, bribe, and lie my way out of my visa overstay. I was dreading flinging myself against the spiny wall of Indonesian Bureaucracy. Even worse than handing my wallet to uniformed officials was the dread in my stomach about leaving Indonesia in the first place. Elin.

My predictions were correct, and I was pulled from line at the gate and led into a small, dimly lit immigration office. I rolled my eyes; the show was about to begin. I was sat in a wooden chair like a schoolkid before the headmaster, and there was a long uncomfortable silence before anything happened. A man sitting behind the desk in a military uniform was chain smoking kretek cigarettes and finally asked me why I overstayed. I could barely see him through the blue smoke in the room. I mumbled something about the election canceling the boat to Gorontalo and he nodded in acknowledgment. I’m sure I wasn’t the only one affected this week.

That didn’t stop him from demanding $40 cash from me on the spot for overstaying two days. In reality, I had clearly only overstayed one day and tried to argue the case — but he was having none of it. My choices were pretty much miss the flight and spend the night arguing or possibly in jail, or pony up the money. You can guess which I chose. I succumbed to my last Indonesian scam for a while and paid up. There was no further paperwork, and I didn’t get a receipt.

Funny, two months ago I was ready to pull the plug on this country and go someplace more enjoyable. Now, my throat was choking up at the thoughts of leaving. What happened? Three days into this trip I nearly drowned, then weeks later I lost a dear friend. It took all I had inside to stick it out here alone, usually being the only white person for days when I was desperately in need of some company and someone to talk to about Elin’s death. I’m still hurting. Now in hindsight, I’m so glad that I stayed.

This place is like no other. When you get away from the tourist areas (which is not hard to do), Indonesia is pretty rough and tumble. There were times when I thought I was in over my head. Many people, including respected travel friends of mine, say that Indonesia is easy. In one regard, it is true — bahasa is the easiest language I have ever tried to learn. However, with so many distinctly different islands and remote mountainous corners in this place, 50 travelers could come here and have 50 entirely different experiences — each forming their own opinion of the place. I guess I drew the shortest straw.

In a place situated on the equator, on the meetings of two oceans including the deepest in the world, composed of 17,000+ islands, and on top of the most geographically volatile place inside the earth — Indonesia is a recipe for adventure (and trouble) — exactly what I was looking for. Unfortunately, since the Tsunami and Bali bombings, tourism is way down and prices are way up. I spent far more money here than planned, mostly on domestic flights just trying to get around.

I have certainly never been closer to the locals or people in any country more than in Indonesia. At times, it was lonely not being able to speak English, but the rewards were far greater. I have always said my heart was buried in Thailand, but it may be time to dig it up for a move.

As my rumbling AirAsia flight pointed its nose toward Malaysia, I was pretty melancholy. I can’t explain it, but honestly I feel as if I am leaving Elin behind somehow. Even though her body is probably back in Sweden. I would do anything to go back in time and keep her from having come here in the first place. There isn’t a single night that I don’t still lay in bed thinking about what happened before I fall asleep.

Luckily, I am only one country and a cheap flight away from Indonesia if this feeling of loss ever becomes unbearable. Within a day or two I could plant myself in the middle of Papua, go see my new family in Flores, or some other equally enticing place. That is my only consolation, and it’s a damn good one.

Indonesia will always be here waiting for me when I want to come back…and it is a question of “when” rather than “if.”

.
Previous Post: Kadidiri in the Togean Islands, Sulawesi
Next Up: Kuala Lumpur, Malaysia