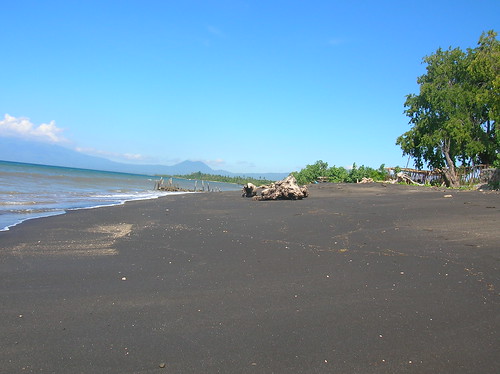 Interestingly, Maumere in Flores, Indonesia, was one of the places the Lonely Planet guide relegates to “There’s no real reason to linger there…”

I end up staying in a lot of those.

Three old women were staring at me in horror as I used a long wooden stick to swing at a low hanging coconut. I was determined to have a fresh coconut to drink, and seeing that there was no one around (at first), I didn’t see the problem in taking one from the jungle that grew up to the beach.

The stubborn coconut finally broke free and hit the ground with an iron thump. I knew without even picking it up that it wasn’t even close to ripe and had no milk inside. When I glanced up, a local family was staring at me in disbelief. I slinked over to them, handed it over (not that coconuts can ripen off the tree or anything) and apologized. I’m still not sure if I was on their land, but they didn’t look happy! Seeing that there were scores of trees along the way, little damage was done other than to my ego and their opinion of how smart tourists are.

After a couple of nights in Maumere, I decided to move out to a bungalow on a black-sand beach called Gading Beach that just opened up two months ago. Most people go an hour west of town to some more expensive spots, but this one was only 10 kilometers east of Maumere and provided free transport. I miss the islands so much I figured mostly deserted Gading Beach would be a good compromise.

Plus, I am running out of time on my 60-day visa here and have to leave the country somehow soon. With the violence and unrest in Jayapura being an unknown (three SUVs full of tourists were robbed and shot up), crossing into Papua was no longer an option. I decided to head down to West Timor, then cross by land into East Timor — a war-torn place that earned its independence the hard way in 2002.

Although East Timor is relatively quiet now, the fighting and resulting starvation actually killed off a quarter of the population living there, making the DMZ between Indonesia and the place I am going less than happy. Some beach time is exactly what I needed before dealing with all that.

I wisely booked my $70 flight to Kupang in West Timor before I came out because I don’t expect a good Wi-Fi signal on the undeveloped beach.

For the last two nights, I have had a gorgeous bungalow on the water for $8 a night — only a little more than I was paying in town. The sea isn’t really good for swimming, and I cut myself to pieces trying to wade out across the mud and sea grass that hide sharp rocks and broken coral.

Update: I had no idea at the time these cuts would cause me all sorts of trouble for  months to come. In fact, they nearly turned septic while I was in Singapore, and I had to be swabbed for infectious diseases when returning to the United States!

The owner assured me that you could snorkel from the beach, but you would have to be pretty damn motivated about doing it. I even watched from my bungalow as a baby whitetip reef shark wrestled with something in ankle-deep water before swimming back out.

The beach, however, is black volcanic sand and extremely interesting. This is the only bungalow in either direction for miles, so you can literally be alone on the beach at any time. Huge, contorted pieces of driftwood litter the place, and some very interesting shells have washed up without tourists around to distrub — even including giant clams without a single chip. These massive shells would have made the perfect wash basin for a house if I had a way to get it home! I spent hours walking around and collecting shells that people would normally spend money for in souvenir shops. There is even a tamarind tree which was producing yummy (and free) fruit that I haven’t had since Thailand. For some reason, I have yet to see tamarinds in any market in Indonesia.

I came to Gading Beach near Maumere to relax and do some writing, but instead spent all day just playing Robinson Crusoe, or better yet, Bear Grylls. During my beach exploration, I found a water inlet set slightly in the jungle that traps fish at low tide. I could see some big swirls in the water and even spotted the side of what could have been a small barracuda feeding on the smaller fish. The vegetation grew right up to the water and provided everything you would need to make a pole or spear.

The next day, I saved some bits of my egg from breakfast for bait and took the top off of a coke can. I twisted it into a sharp fishhook using my Gerber tool and walked down to the fishing hole where I shaved a stick into a rod and tied on some of my fishing line. The restaurant had fish, but how many people can say they caught their dinner? That’s definitely one way to travel on a budget! I gave it a go and had several strikes including a big crab that grabbed my hook and took the egg off. If I was starving I could have easily grabbed him in the shallow water or waited at the small channel (only three feet wide) that fed from the sea to spear a fish.

In the end, I went home empty handed (Bear would have been disappointed), but I had a blast watching the fish go for my bait. In a real survival (or zero budget) situation, it would have been more than possible to bring home dinner from there. Just like Gili Air, the locals wade out at low tide to spear things trapped in the rocks. Considering that most of them are always smiling, it makes you realize how little we actually need to be happy in life.

In consolation, I spotted a brown coconut laying at the base of a tree on the walk back. I was anxious to try splitting it open on the sharp driftwood like the locals do, but a random guy wandering around with a machete offered to do it, and I thought it would be rude to refuse. Besides, it’s usually a good idea to let a guy holding a machete on a deserted beach have his way!

The liquid inside was delicious, and I actually made it my dinner. There was so much that I poured the rest of it over my red shoulders and arms as an after-sun lotion; it worked perfectly and smelled better than anything you can buy. This place is so untouched, I could have spent a week just playing survival here had I not wisely booked my flight before coming out.

During the day, you can see a huge active volcano just across the water, and when the wind is right, you can make out the gray smoke snaking out of the top. A friendly, scuba-addicted English woman staying here (the only other guest) told me that there had been small earthquakes two nights in a row at around 2 a.m. Sure enough, on my second night there, a rumble rattled my bungalow in the darkness while I sat on the porch. The wind coming from the sea was strong, and I felt a little on edge wondering if the shake could have produced a big wave that I wouldn’t see coming.

My last night was perfected with a nearly full moon shining down on a black, sparkling ocean. The sounds of the surf and salty smell would have been good enough, but I even spotted a huge shooting star with a sparkling tail behind it that last several seconds. Coming to Gading Beach near Maumere turned out to be one of the best decisions I’ve made in Flores, and the perfect goodbye before heading out to Timor tomorrow.

[2021 Update: Sadly, the Gardena Hotel has closed]. If you find yourself in Maumere, check with the owner of the Gardena Hotel for transport out to Gading Beach. Even as a day trip you can wander a completely untouristed, unspoiled black sand beach — and maybe you’ll even have better luck catching dinner than I did.

“We are free to do whatever we wish, but we must accept whatever comes of it. That is the way it is.”