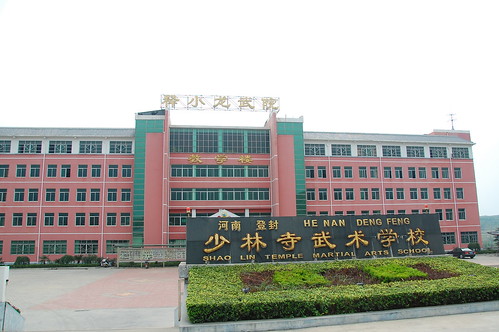 Every place that I go, there seems to be a new theme song stuck in my head.

The song for my kung fu experience in Deng Feng strangely ended as being Country Roads by John Denver. My whole team, who comes from a multitude of different countries, knows at least the chorus and we have sang it on various occasions to lift our spirits. My German friend Jonathan knows the entire song; he recommended that we sing it. I am from the region the song is talking about and I don’t even know the lyrics!

As expected, my exit from the Shaolin kung fu school (Shaolin Temple Xiao Long Wu Yuan) which has been my home for the last 32 days was bittersweet. For what seems like an eternity, I have laid in my bed at night and thought of this day. It is hard to believe that the day of my escape has finally come.

I told only a few goodbyes, mostly to the guys in my group, and kept my leaving as low profile as possible.

There is a tradition that when someone leaves a group, the sifu holds a party the night before and you talk, share training memories, laugh, and swap emails and hugs.

Not surprisingly, my sifu decided to dispense with the formalities and did not even as much as mention that I was leaving in formation. He only grunted when I turned in my key, and gave me a handshake. No words were spoken. I have been baffled for weeks as to why he has had such open disdain for me. Maybe it’s because I consider Amanda Formoso (one of his other dislikes) a friend, or maybe because I am American — who knows. I am going to miss his colorful mannerisms and mood changes though, and I was actually beginning to enjoy being called “soft, like the noodles.”

When it became obvious that sifu was not going to hold a party, we decided to take matters into our own hands. Tene and I picked up the ingredients and mixed a big bucket of sweet-smelling Sangria (or bowle for you Germans) and we held a secret meeting in my room after lights out. There were music, drink, and laughs for hours — much better than the usual going-away party. We sat hushed around an iPod with speakers; to get busted would mean late-night exercises. I am really going to miss my training group. I could not have chosen a better team of men and women with whom to experience this bizarre place.

Despite the negativity, I threw my rucksack over my shoulder and walked proudly out of the front gate. Hell, after one month of training in this place, if you can walk on your own legs at all you should be proud. 🙂

As I made my exit, a light rain was falling as a mist. The air felt cool and refreshing on my face. Behind me, I could hear the usual sounds of swords snapping in the air, monotone announcements from the office over the loudspeakers, and students shouting in unison.

I never looked back. And I’ll most likely never be back here.

I was smiling too much to look back. I forgot just how good it feels to hit the streets with a backpack, not sure where you are going or exactly how you are going to get there. Real vagabonding — I love it. As I walked to the bus stop, I sang out loud: