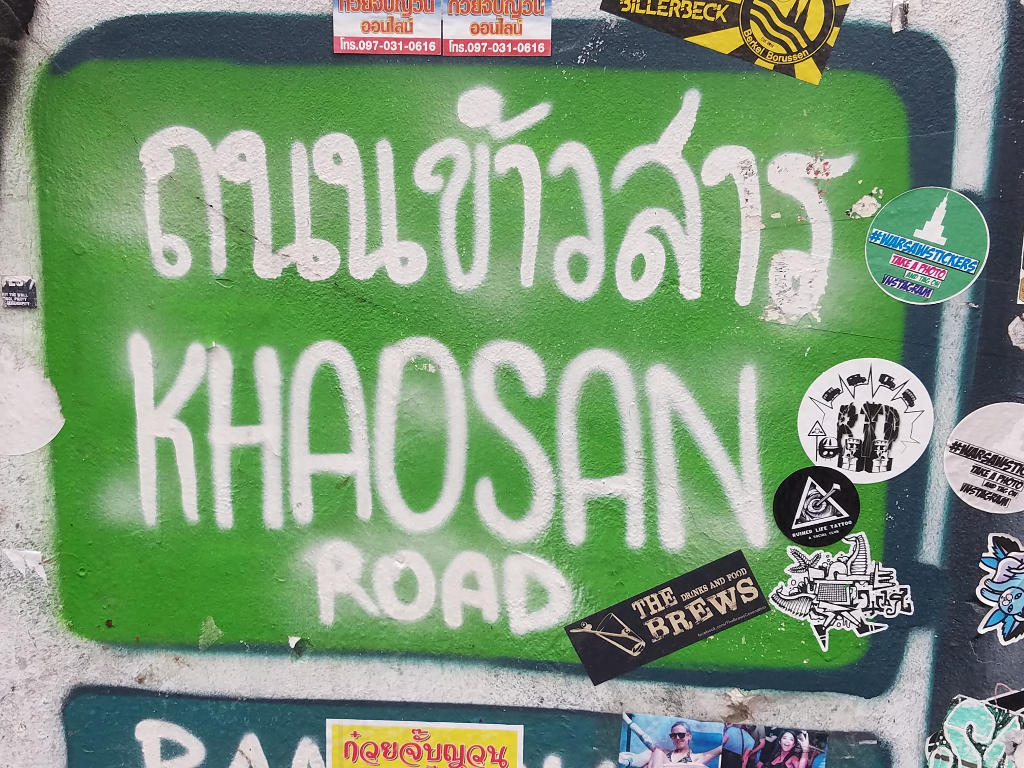 After dragging around Bangkok’s Khao San Road for almost an hour, I realized I was hopelessly lost.

I stumbled along wearily through a midnight forest of neon. Khao San Road was flicking its forked tongue for the Friday night circus. Masses of vespertine clowns were in top form.

The party was peaking, but it would not die. It never does on Bangkok’s Khao San Road. The street sizzled with puddles of vomit, piss, and other mysterious backpacker fluids. I was quite possibly the only person for miles who didn’t have a liver full of Thai whiskey.

Ordinarily, I could have handled myself. I’ve become particularly adept at survival games. But I had given my last gasps of energy to Korean Air. I exchanged 23 hours of my life for geographical distance. The floor of the international terminal in LAX was still warm where I had stretched out. With a head full of anticipation, sleep never came. I wondered what my first steps in Asia would feel like.

What had I done?

One of the many tuk-tuk drivers hunting drunken prey took pity on me. I must have been a sorry sight indeed to uncover whatever good remains of a tuk-tuk driver’s black heart.

The clusters of drivers had long since given up on trying to scam me. I knew their faces, and they knew mine. I wobbled, nearing collapse beneath the weight of an overpacked backpack. I held the hotel booking confirmation out to the man.

After walking in circles for over an hour, I was beginning to think maybe the guesthouse I booked didn’t exist. Perhaps it was really just an elaborate scam to catch naive first-timers such as myself. It felt like a trap. I had plucked the strands of a sticky situation, and the hairy resident was en route.

Or maybe the clowns had ripped the sign down in a crescendo of chaos. There was an uproar around me as “Wonderwall” by Oasis began to play.

The brown lines creased on the driver’s face as he studied my hotel info. He squinted through the acrid smoke curling up from his Marlboro. A patch of black hairs sprouting from a mole on his forehead twitched optimistically as he conferred with another driver in Thai.

“Ahhh…! It’s there.” He pointed down a small, unlit alley leading off the main road, sandwiched between two shops. The entrance was just meters away, but I never would have found it without help. Although I was too tired to realize, this was my first lesson in Thailand’s Theravada inclinations. I wanted to hug the man. His forehead feelers twitched hopefully.

The dark alley wasn’t exactly inviting. No telling what horrors await in the shadows, but I had to take my chances. Even getting abducted was a better prospect than circulating through the madness one more time. I was willing to risk anything to get this bag off my back and put my head down.

Rats led the way for me; their shadows stretched eerily out of proportion in the light from bars. A ladyboy squatted to pee, carefully holding pants and purse. The nook was practically paved with excrement, human and otherwise.

Behind me, youth of all nationalities shouted and slurred, “And aaalll the roads we have to waaaalk are winding…”

I found my hotel and entered into a brightly lit, tastefully decorated lobby. It felt like a Marriott.

Had my mind stretched beyond its elasticity and snapped? The clean lobby was too good to be true. It was like an ominous mirage—the last thing a man sees before buzzards turn him into a sandy, Nevada buffet. Not knowing better, I had splurged on my first two nights in Bangkok, paying many times more than what experienced travelers would have paid.

The leathery Thai woman at reception was expecting me. She snatched my reservation printout into her meaty hand, then fired questions at me in rapid succession.

“Why you so late? You want towel? You want girl?”

I hadn’t even shown my passport yet.

I did my best to explain that I had just left a job, sold most of what I own, said goodbye to friends and family, slept on an airport floor, then traveled across two continents and the Pacific Ocean. I wanted nothing more than to curl up into fetal position, suck my thumb for 24 hours, and ponder what the hell I was doing in Southeast Asia.

A girl, particularly one being pimped by a 65-year-old Thai grandmother in a hotel lobby, was the last thing on my current to-do list.

“It’s okay. You tired. How old are you? You check in tomorrow.”

My second lesson in Thailand was again lost on me.

She led me to my second-story room, unlocked the door, and put the key into a convenient little plastic slot near the door.

The woman switched to a motherly voice and gave me a reassuring smile. “You take shower. Have rest. Tomorrow, eat breakfast.”

She stuck her head back in the door one more time, “You want girlfriend?”

I declined again, thanked her, then locked every mechanism I could find on the door. The sounds of Bangkok were still oozing in through the window. Among them, I could make out “Wonderrrrwaaaal…” I shuddered to think of the mistakes being made out there at this hour. My first-arrival adrenaline was drying up. The reserves ran out. I was a numb creature peering at the outside world through two eye sockets.

I stripped and dragged myself to the shower. For inexplicable reasons, I grabbed the key out of the holding slot and stuffed it into my pocket. I felt so out of my element, maybe I was afraid to accidentally lock myself out in the morning.

Two minutes later, just as the shampoo hit peak lather, the lights shut off with a dull click.

My little shower came to a halt. Cursing, I stood dripping in the dark, waiting to see if the outage was only momentary. I had read about the rolling brownouts; they seemed a part of daily life in Southeast Asia. Some giant madman had swirled the wires on poles like one would spaghetti onto a fork.

Or maybe the clowns outside had placed my hotel under siege, trying to force me out. The animals figured out how to cut the power.

As minutes went by, I accepted the inevitable. I would become a creature of darkness. The prospect wasn’t so bad.

Soon, beads of sweat accumulated and formed Amazonian rivers on my clean body. Heat turned my upstairs room into a suffocating sauna. Two days earlier, I had just scraped ice from my windshield as January clawed at Kentucky.

The filthy blades of my ceiling fan were necessary tools for survival.

I stood dripping in the lobby. The woman at reception tilted her head to one side when I told her of my my electric woes. With her large glasses, she resembled a praying mantis. She seemed to ponder my complaint for a moment, then dragged another card over in her game of Solitaire on the computer.

In a moment of eureka, she looked up and asked, “You want girlfriend?”

Another Greg in the multiverse probably jumped across the reception desk and began banging her mantis head into the nearest solid surface. But I managed to maintain peace in my own timeline. Surely Bangkok’s Khao San  Road hadn’t unraveled me already? I hadn’t even tried out half the useless travel gadgets I carried around the world.

Less than 24 hours in Bangkok and my left eye was twitching uncontrollably. I was also spitting out random obscenities that were creatively grotesque enough to surprise myself. Perhaps I would fit in here, the City of Angels, after all.

Outside, I could hear the opening of “Wonderwall” playing again.

I stormed back up the stairs, determined to survive no matter what. Inexplicably, the lobby had power but I didn’t. Maybe the bastards were looking for ways to save power. I would have to demand a refund in the morning.

The first gray hints of a new day filtered through the window as I settled into bed. Then a gentle tapping rattled my door.

I wrapped my naked body in a sheet, fumbled the locks to open the door, and was promptly met by a ladyboy in sequined miniskirt.

Instead of answering, I hissed reflexively like a raccoon that has been cornered and poked by a stick one too many times. She accurately interpreted my response as a “no” but paused in mid pivot on tall platform shoes.

“Hey, why you no have key?” An unnaturally long, fake fingernail tapped the plastic slot by the door.

As I listened to the clomp clomp of this brilliant person walking down the wooden hall, I realized what I had done.

My key slid into the innocuous “holder” with an audible click. Like magic, lights hummed and the fan began to turn.

The quaint, remember-to-take-your-key slot was actually less about convenience and more about saving power. The device shuts lights off a couple of minutes after you leave the room—something many Americans don’t think about.

Reverberating from the street, the drunken voices were still shouting, “You’re gonna be the one that saves me…saves me…” over and over.

All was going to be okay tonight along Bangkok’s Khao San Road. 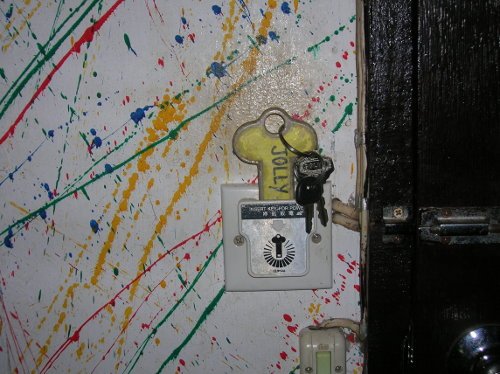 Previous Post: Celebrating 13 Years Out of the Cubicle
Next Up: Ubud or Canggu in Bali: Which Is Better?