Driving a Scooter From Chiang Mai to Pai 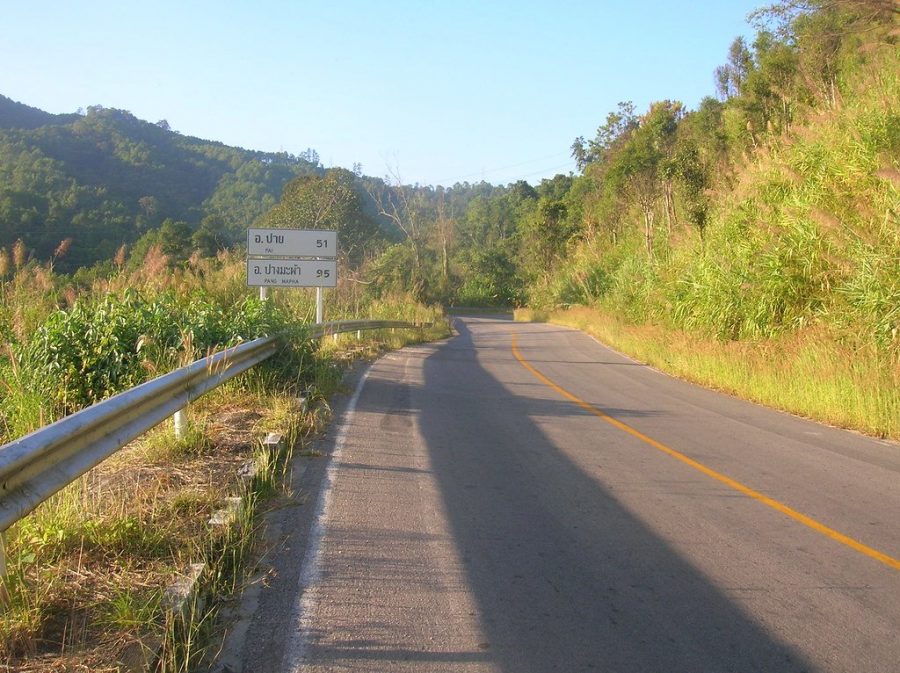 First, I apologize for writing retroactively, but such is the life of someone with too many irons in the fire.

Walking home from lunch in Chiang Mai I saw a sign for motorbike rental: rent for two days and get one free.

I knew what I had to do.

Back in 2006, I sat on a motorbike for the first time, figured out how to drive in the busiest of pre-Songkran traffic in Chiang Mai, then set off through the mountains of Northern Thailand. I rode a loop from Chiang Mai to Pai then on to Mae Hong Son on the border of Burma.

The ride was unforgettable. So was running out of gas in the middle of nowhere, getting a flat tire, almost running off a bamboo bridge, and riding through a full-on forest fire burning on each side of the road. All those things really happened.

In a moment to recapture those early days of vagabonding, when there was no laptop and common sense was a rare commodity, I hired a shiny new Yamaha and decided to hit the mountains once again…

I packed a small bag, left the bulk of my stuff locked away in my apartment, and saddled up on my new ride. I was even smart enough to bring along an empty 1.5-litre bottle to fill with petrol as a backup.

I fought through Chiang Mai traffic and was soon on a gorgeous stretch of wide, straight road blasting through the suburbs with my tiny 150 CC engine screaming in protest. Wind soared past me and unseen objects pelted me; my nostrils were black with diesel exhaust from the trucks around me. Pollution never tasted so delicious.

After a tense 90 minutes, I took a left and pointed my bike north. The mountains loomed ahead and the frantic pace of riding on the busy highway was lost to a serene two-lane road cutting past small cafes and houses. My sore bottom needed a break before I hit the serious stuff in the mountains, so I pulled into the gravel lot of a small restaurant. My butt was still vibrating when I parked and waddled inside like a sore cowboy.

Spicy fried rice with tuna and a cold, glass-bottle Coke made everything seem alright again. The sun was scorching; I could have cooked an egg on the black seat of my motorbike. Interestingly, there was a cop talking with the owner. I gave a friendly smile and wave, but he never grinned; the reflection of his aviator sunglasses never left me. We both knew good and well that rental bikes are not to leave Chiang Mai — it’s in the contract.

I hit the road at full speed, checking my mirror every now and then for those aviator glasses coming to ask me for a bribe. Dogs and chickens occasionally crossed with suicidal tendencies in front of me, while laughing kids waved and smiled. Soon the foothills gave way to bigger hills and then the road was winding madly up and up into the mountains.

The lush, verdant greenery on both sides of the road smelled sweet; blooming vines and leaves rotting in the sun smelled so much like the national parks at home. I buzzed along for an hour or two before I noticed two things: New construction had much improved the road from the gravel mess that I rode in 2006, and the air was getting bloody cold!

The farther I went, the more the chill in the air relentlessly bit my skin. Soon I was literally trembling and shaking enough to fall off my bike. Unlike in 2006 when I did the ride in April — Thailand’s hottest month — the mountain air was freezing this time around! Stupidly, I had brought along only shorts and a T-shirt. Every twist of the throttle by my white knuckles would send a blast of frigid air through my very soul. 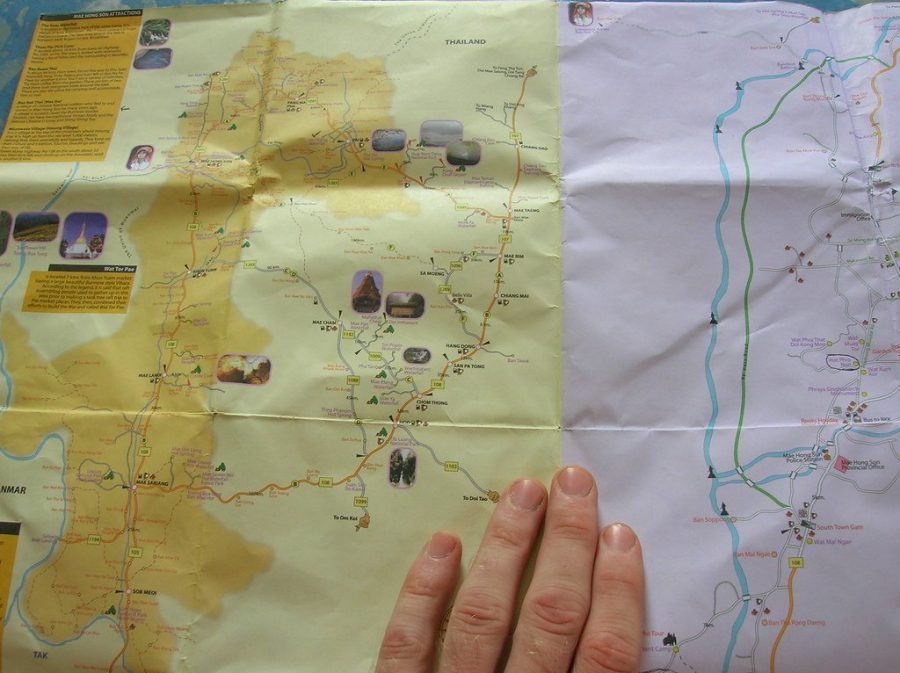 I stopped at the first village, barely a bump on the map. As I paced around trying to warm up, some locals were having a small party in front of a row of street stalls. I watched in my mirror as a guy with long hair and a denim jacket walked over. He handed me a dirty bottle. I accepted, wiping away some of the frozen snot on my upper lip.

The clear, homemade rice whiskey felt like a fire that started in my stomach and spread to all extremities. I thanked him many times, tried not to think of the 15 lips that had shared the bottle, and sped into the next leg of my journey to take advantage of the artificial warmth. 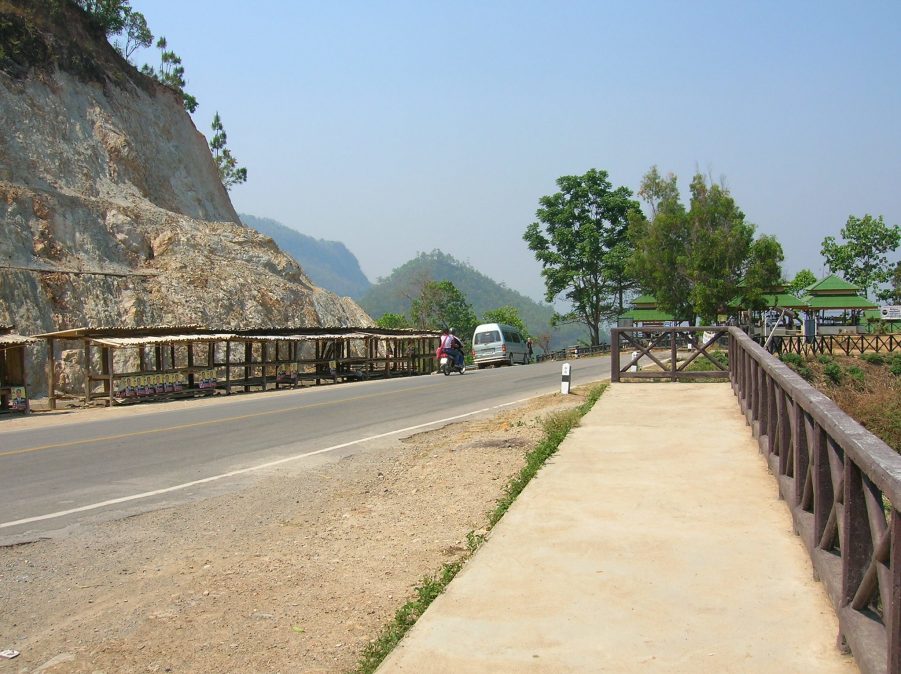 The winding road was fun to ride, but inevitably I would end up stuck behind a giant truck doing its best to muscle up the mountain. Tanker trucks and construction vehicles dominated the road; there were no other motorbikes! Each time I would buzz around the monstrous trucks like a mosquito, doing my best to pass. Eventually I would get around the thing on some blind turn, only to see a truck of equal size coming head on in the other lane.

The difference between life and death? Timing.

My fuel gauge was starting to make me nervous, so I pulled over at a shack on the road. A yellow-toothed woman was selling plastic bottles of brown goop, which I thought were petrol. In rural places, people commonly sell fuel on the side of the road from any old bottle they can find. I pointed to the bike, and she stopped me before I really made the trip interesting…

They were bottles of honey. 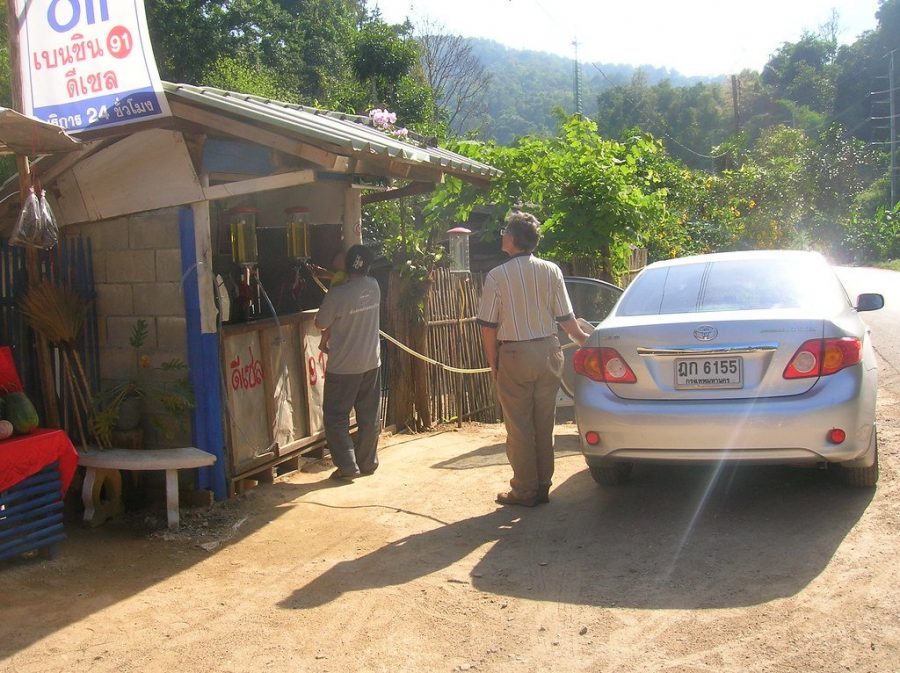 A few kilometers down the road, I did find a woman selling fuel from a 55-gallon drum and hand pump. I sat patiently watching and waiting as some genius literally filled up his rental car in front of me! I could hear how low the drum was; if this ass took all the fuel then I was going to find myself in trouble once again. Luckily, she moved the hose to a new container and I managed to fill my tank.

Shadows were getting longer as the sun twinkled through the treetops. I wanted to reach town before dark, so I threw over a fistful of Thai baht, strapped on my helmet, and looked toward Burma.

Next stop: Pai, Thailand — a place where I’ve realized my true addiction to traveling.

Previous Post: Five Years of Independent Travel on the Road!
Next Up: One Long Flight