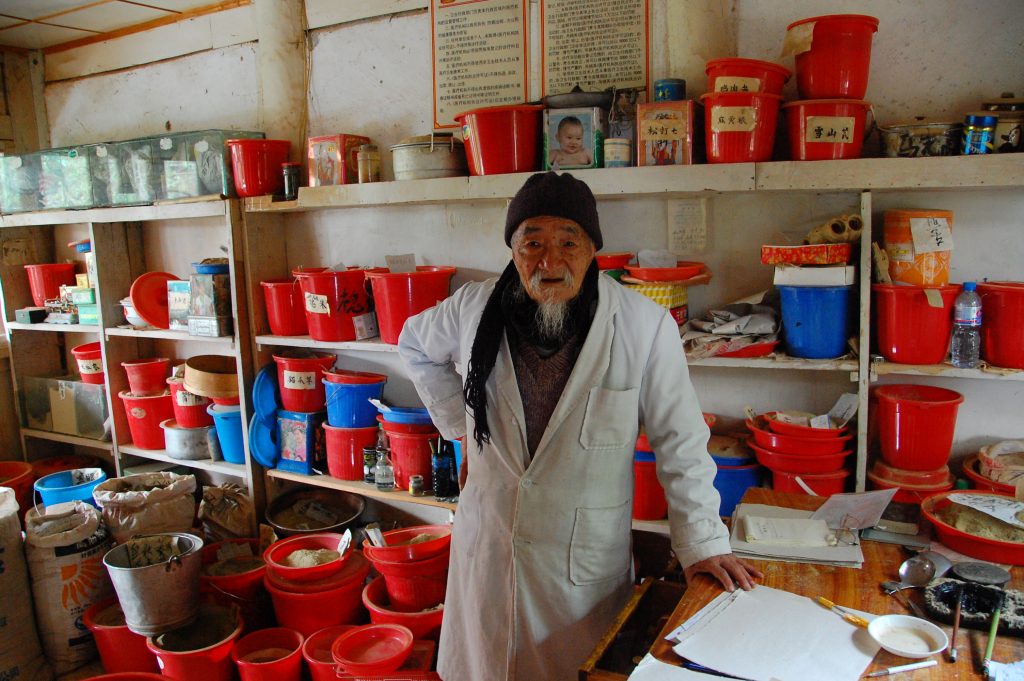 Meeting Dr. Ho while in Bai Sha (Yunnan, China) became one of my most serendipitous moments on this trip. But first, here’s how we got there:

The strangest thing happened at breakfast this morning.

I was sitting with my Lijiang crew at Mama’s Guesthouse #3, eating the usual three-yuan banana pancake which is enough to split your stomach, and whining about the crap weather. Suddenly, we heard some excitement outside.

A quick glance through the window confirmed…the sun was shining for the first time in many days!

We all jumped up and ran outside just to make sure that it wasn’t a cruel hoax. For the first time in so long, I could feel the warmth on my cold cheeks, and everything seemed so much more alive. Even the birds were happy enough to sing about it.

Lijiang in Yunnan has become a sort of waiting place, like a base camp for climbing, only most people are waiting for the weather to cooperate long enough so that they can go trekking in the Tiger Leaping Gorge. I am also one of the soggy, miserable ones who has been here for nearly five days with wet clothes, a sore throat, and fighting weather-based depression.

Fortunately, we have made the best of it, and the people I have met here have more than made up for the rotten weather. I have had so much fun being lazy and partying with this crew that I honestly gritted my teeth when it was time to part ways. Even us manly trekking vagabonds were giving extended hugs to each other.

To celebrate the break in the weather, we all hired bicycles and hit the road to the small village of Bai Sha, about 45 minutes north of Lijiang. Cycling has become my favorite thing to do here in Yunnan.

We were mostly just wanting to get outside, but we did have one mission on this particular journey: we were seeking out Dr. Ho of Bai Sha, an old Chinese herbal doctor who has reached near-celebrity status. He has been featured on BBC and in various magazines around the world. Even National Geographic was here three weeks ago filming a special about him and his miraculous herbal cures!

The ride through the countryside was spectacular, and doctor or no doctor, it was so nice to finally have some exercise. I forgot what the blue sky and mountains looked like. 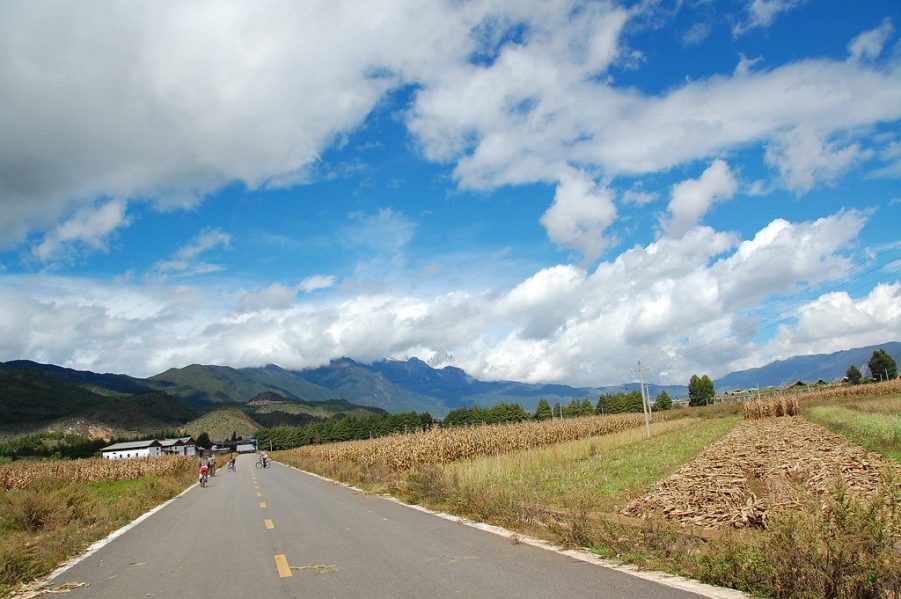 Once we reached Bai Sha, the good doctor was certainly easy enough to find. There were signs out front advertising all the TV shows and magazines in which he had been featured.

Despite being a celebrity, Doctor Ho came outside to greet us shabby backpackers, and there was no doubt that he was the real deal. First, the man looked the part. He had the stringy white beard and intelligent demeanor you would expect from a Hollywood rendition. His dark eyes shined with the enlightenment of someone who was doing what they loved and had gathered vast intelligence. If he had not been wearing a white doctor’s coat, he could have passed for Pai Mei (as seen in Tarantino’s Kill Bill 2) or some other legendary kung fu master.

The doctor spoke perfect English and invited us inside. He offered us free herbal tea and chatted with us for a good 30 minutes. The walls were covered with postcards, thank you letters from cured patients, and newspaper articles about him and his natural medicine.

The air was thick with the smell of old papers and fresh herbs and plants. He proudly showed us letters from American and European doctors declaring that their patient’s leukemia had been inexplicably cured after visits to Dr. Ho of Bai Sha.

This was the real deal, and despite Doctor Ho reaching the same cult celebrity status you would expect from a motivational speaker or snake oil salesman, he was unpretentious and friendly. It was an honor to meet him and became a highlight on my trip. At no time did Doctor Ho ever leverage his reputation and try to sell us anything. I kept waiting for the inevitable “sell” to come, but it never did!

That is a first in China.

I told him that I was doing some writing, so he gave me some paperwork with details about his life — I guess to make sure I got my facts straight! Way more than I want to go into here, but I do plan on doing an article about him when I reach Bangkok in a few weeks. 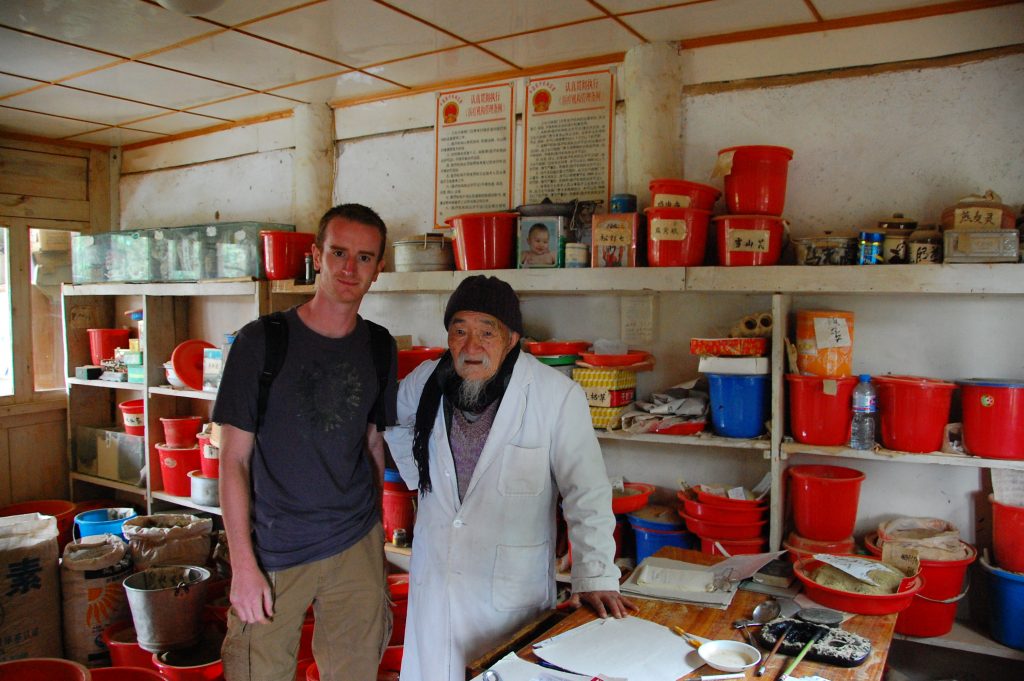 As we started back to Lijiang with smiles on our faces, a light rain started. We stopped our bikes and made a group decision to continue on to Lijiang rather than wait it out in a cafe. After all, the last time the rain began, it didn’t stop for a week. Within minutes, thunder rocked us off our bikes and the clouds burst open with the coldest and hardest rain imaginable.

We rode onward with wet backpacks, shoes, and with clothes clinging to our body — everyone was chilled to the bone. Becky was laughing like a maniac and shouting “just embrace it!” over the roar of the rain hitting the muddy road. She offered a valuable lesson at just the right time, and embrace it I did.

I laughed the whole way home in a fit of giddiness, which helped keep me sane somehow. We took turns shaking our fists at the sky and shouting, “Is that all you’ve got??!” The good news is, if I get more sick, I know where to go now.

Doctor Ho of Bai Sha probably has an herbal remedy.

I will leave you with a picture of the “drowned rats” gang. From left to right, Tara from Australia, myself, Ben from Washington D.C., Becky from California, and Jirtka from Czech. Some of the people you meet in hostels while traveling become a part of the best memories from your trip.

Previous Post: A Wander Around Lijiang, China
Next Up: Tiger Leaping Gorge (Day 1)