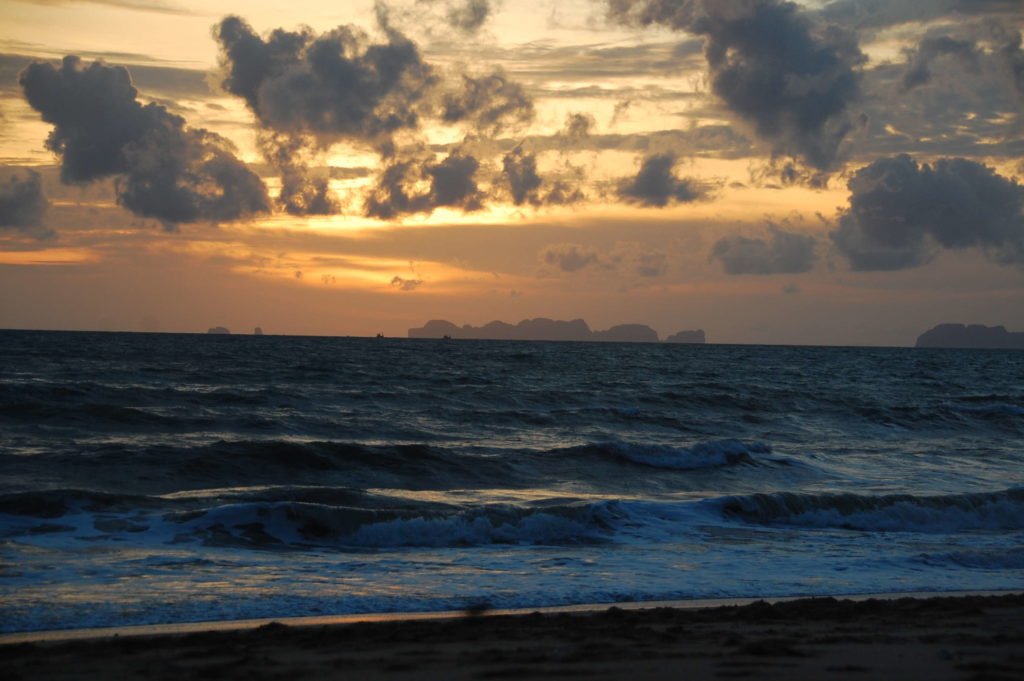 Just to be clear, this is about avoiding the Rat Race (or Corporate America, if you prefer) and instead enjoying sunsets on Koh Lanta, my favorite island in Thailand. No one was actually racing rats here (that I know of), and if they did, you should be all means go see the spectacle.

As hermit crabs begin to drag their shells around me for the first forays of the evening, I lean back in the gritty sand and watch the Andaman Sea swallow a yellowish-orange sun. The jagged silhouette of nearby Koh Phi Phi Island adds to the meteorological drama.

I’m watching a Koh Lanta sunset on Long Beach, one of many I’ve witnessed over the years. Despite the fact my first and only theft on Koh Lanta occurred on a different trip just a few hundred meters away, I’m lost in blissful thought.

The burning orb first touches the water, then seemingly accelerates as it is pulled beneath the blue and extinguished. The finale is an explosion of orange across rippled cirrus clouds; the show will be over in 15 minutes.

Cliches give writers the night sweats, but describing this absolutely flawless sunset without using them is hopeless.

Just another picture-perfect evening enjoyed on a practically deserted Long Beach in the low season. This is the same beach where I went horseback riding in 2006. I waited for my beaten-up dopamine receptors to unclog, for some tingle of appreciation, and sadly I had to dig deeper than I want to admit.

I’ve seen hundreds of these Koh Lanta sunsets now, many on this very Andaman Sea, and almost didn’t bother to walk the 100 meters from my new bungalow home to the beach for this one.

I should be tied to the nearest palm tree and flogged. 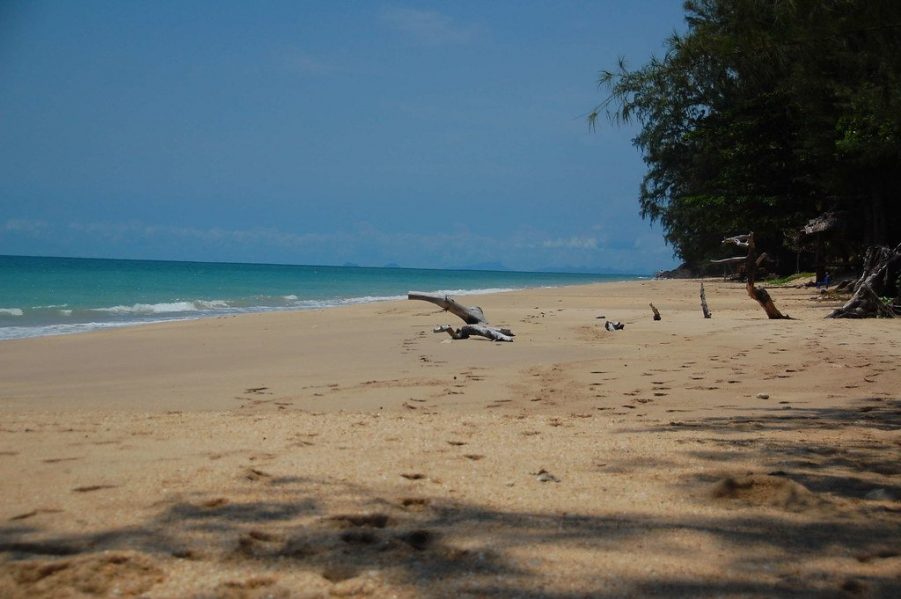 So that made me start thinking; a good thing to do when you are beginning to grow complacent about postcard sunsets in exotic places.

I realized that as I was sitting shirtless in the sand watching nature do her best to take my breath away, literally at that moment a much different scenario was taking place back home in Kentucky.

The 12-hour-ahead time difference here means that when I see the Andaman swallow up that gorgeous sun, it’s literally going just around the corner to wake up my friends and loved ones on Eastern Time.

A dreaded, despised scenario which I know all too well: Monday morning. 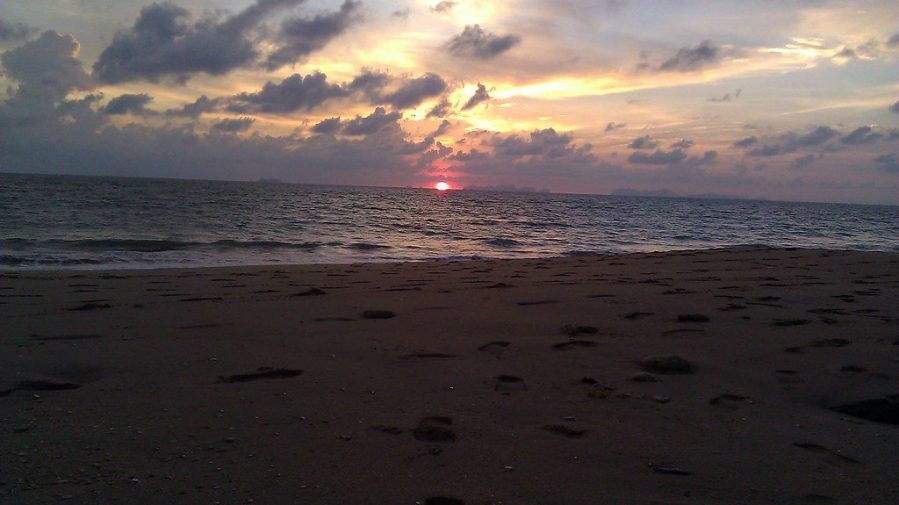 Monday Mornings in the Rat Race

If you’re a morning person, you can stop reading now. Or continue on to see how the rest of us sane people live.

Coffee makers set on timer have clicked to life. The aroma of hope and caffeine is starting to waft through houses into the bedrooms of people clinging onto the last precious minutes of their weekends. Birds are in an annoying frenzy outside. The first sounds of traffic and streaks of daylight are filtering through curtains.

Groping hands are searching for snooze buttons to pound. Glowing digits on alarm clocks are being scrutinized. Morning math is being calculated: how long can I continue to hold this pillow in defiance, eyes squinting against the invading morning light, until the inevitable has to happen? What can I sacrifice from my morning routine to remain comfortable for a few more precious minutes?

As I sit here shirtless, wearing the same shorts that I’ve worn for three days, someone at home is staring sleepily into a cluttered closet, wondering what to choose. Or even more nightmarish, buttoning a dress shirt and fumbling through knotting a tie to the correct length.

The neighbors’ engines are being warmed up. Keys jingle. Doors slam.

The first horns sound; people who miscalculated the morning math are going to be late. Traffic is backed up worse than ever. Women are using rear-view mirrors to put on makeup. Text messages are flying. Unwanted meeting invites lurk in bulging email inboxes. Managers are feeling motivated. Cubicles fill with employees who begin opening spreadsheets. Phones ring around the room.

The bowels of a dark, ancient machine—one that runs on blood, meat, souls, and dreams of regular human beings—begin to churn; rich men rub their hands together in anticipation at the other end, hoping the excrement will be a fraction of a stock point gained.

Only by sheer grace and well-planned coup did I manage to escape IBM, perhaps one of the most oily machines in Corporate America. It had already chewed on me for close to a decade before I managed to drag away screaming in 2006 and salvage my 30s. My 20s had already been decimated by Corporate America and a mortgage.

It’s not entirely my fault. I was convinced from a young age that the only way to see island sunsets other than when on two-week vacations was to spend a minimum of at least three decades in this cubicle, allowing The Machine to shred its way through my guts and youth with rusty claws.

Many, many days I walked up the stairs to the back entrance of my building in the dark on a winter morning, then exited again in the dark of a winter evening; the sun was a luxury afforded only to a select few with offices. Cubicle dwellers don’t need light to survive. We thrive as mushrooms, kept in the dark and fed lots of crap.

Most of the things that really make good people happy are free or nearly free, anyway. How many Saturdays did I just want to watch a sunset, go hike in the woods, sit in a park, throw a line into a pond, or read a book when instead I was called into work. Some baby seals were getting out of control so the Board of Directors figured a good clubbing was in order.

The stomach of The Machine was rumbling for more blood, and as employee number 6Axx06 (two digits removed), I was forced to give mandatory overtime while on salary—a practice for which IBM eventually lost a lawsuit, kept hushed, and was ordered to give backpay to many, many people.

When one friend of mine and fellow engineer asked his manager if being required to work an extra 15% per week was legal, the manager leaned back in his chair, fingertips together, and ominously replied: “Well, if you work the extra, we can do things for you.”

The mutiny didn’t last long. People dropped like flies. IBM began outsourcing and offshoring jobs faster than they could assign serial numbers to Indian engineers. My hallway was soon lined with empty offices as cohorts with families were flushed from The Machine for a cheaper alternative. An army of educated guys named Raj were willing to work for what the average teenager at Baskin Robbins earns scooping ice cream.

Even with a current stock price of $182 per share, an incredible gain over the last five years, IBM leadership announced earlier this month an additional 3,300 American job cuts and mandatory pay cuts for thousands of people. The lucky or unlucky ones, depending on how you look at it, will still have to give up free sunsets and drag through Monday mornings as described above to pick up the work and projects left behind by their fallen comrades—for less pay.

How can intelligent 20-somethings straight out of university still be willing to queue up for cubicles? After seeing these vomit-inducing factoids they should be running like hell with middle fingers in the air. Stay away my young friends! Go make love on exotic beaches and watch free sunsets instead of television.

Making my escape from Corporate America was the smartest thing I’ve ever done.

Trust me: The Machine’s appetite will never be sated. 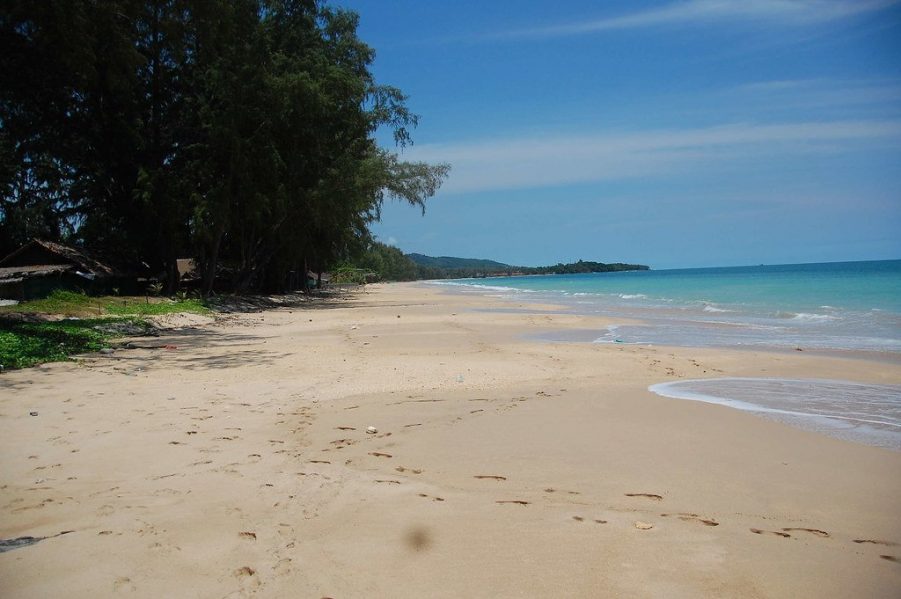 For the third time in several years, I find myself living on the mostly closed-for-low-season island of Koh Lanta, my favorite in Thailand. My combined daily expenses tally around US $20 per day—a splurge for this place—which includes rent for a gorgeous bungalow with sea view, delicious meals, and drinks.

Unlike past years on Koh Lanta, I’m not doing much partying and socializing on Long Beach.

I feel spoiled, rotten even, but every one of these island sunsets such as the one I nearly took for granted tonight are gifts not to be wasted. People grind through Mondays for 30 or more years just to save enough money to see a few beach sunsets between handfuls of prescription medications.

Thoreau said: “We spend the best part of one’s life earning money in order to enjoy a questionable liberty during the least valuable part of it.” 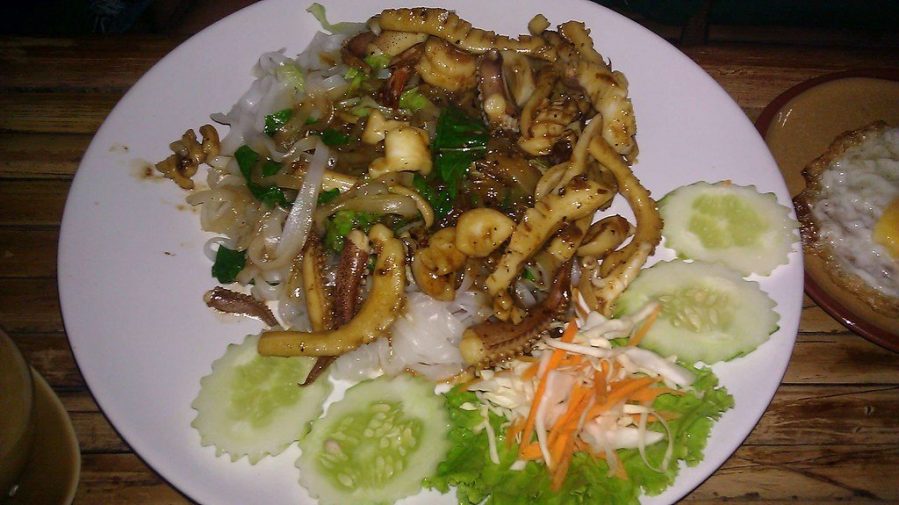 If you happen to be sitting under fluorescent lights at the moment, playing on the internet when you should be opening spreadsheets, don’t give up hope. The world is beginning to see just how ridiculous this entire make-rich-guys-richer cycle really has been all along. If you want help

The Machine itself is getting clogged with bones and splinters of dreams; even it will break down one day. When it does, I’ll still be sitting here on my island watching those sunsets.

I ponder these things as I walk back to my bungalow, careful not to step on one of the many crabs or frogs which account for most of my neighbors. 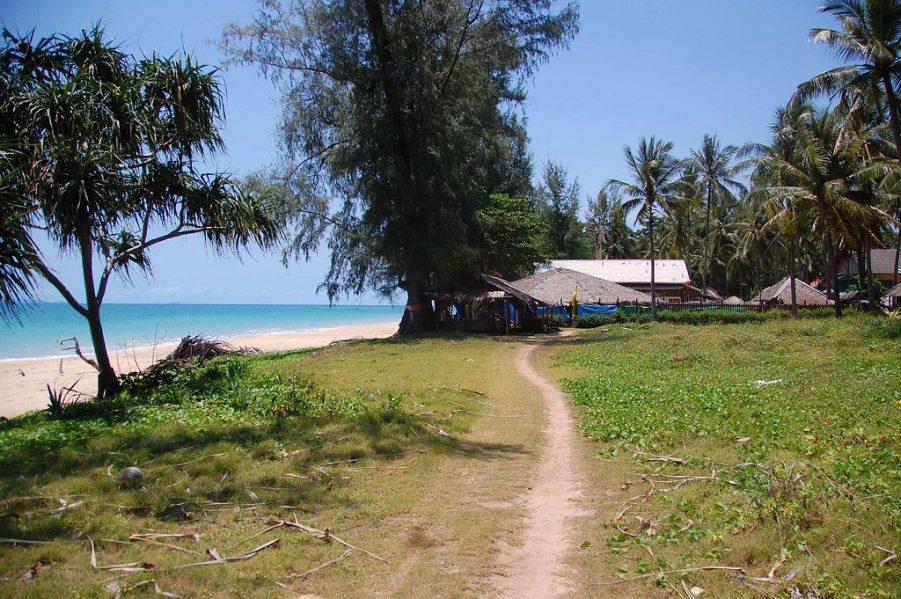 Previous Post: Backpacking Travel in Laos
Next Up: So You Want to Be a Writer?