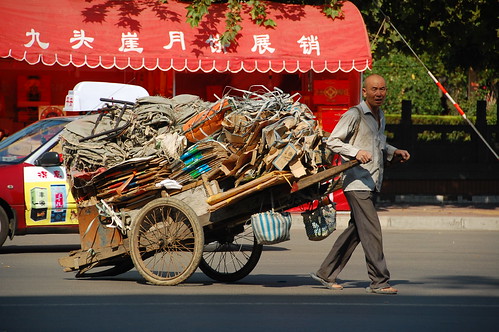 Deng Feng is the name of the little town where my kung fu school, the Shaolin Temple Xiao Long Wu Yuan, is located.

Xiao Long means “little dragon” and there are about 4,000 little dragons (Chinese kids) dressed in red uniforms running around this place. Their parents deliver them into the hands of this school for four cruel years to prepare them for a life of service in either the military or police. A rare few might even go on to the movies. There have been a few stars (including Xiao Long) that came out of our school, and you see picturess with Jackie Chan and others in the lobby. These poor kids live this nightmare and then some for four years; I can’t imagine. They are not even allowed to leave the school or wear civilian clothes as we occasionally do.

Most people, either through legend or movies, have heard of the Shaolin Temple, but very few souls have had the rare blessing to visit Deng Feng. You aren’t missing much. This little squat of a town is mostly just industry, but the dirty streets line up directly with the majestic Songshan Mountains where a lot of history has taken place. 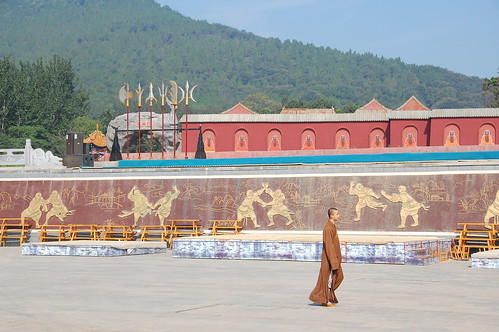 Unfortunately, Deng Feng is pretty much our only option for a day off (on Sundays) away from the school. Students know that it would be madness to stay on the school grounds for 14 days straight, so they make a beeline for town, even if it means just walking around and window shopping the hardware stores, TV repair shops, plumbing supply vendors, and other completely useless options.

There is one brief escape from the madness, however: The steak house! Pizza, steak, cold cokes, and beer. It’s the place to go for a best-effort Western meal and is a nice place to just sit and share stories about power-stretching and angry sifus.

With October coming quickly, people seem to be leaving the WuShu school in masses. Everyone has either finished their holiday, has uni to attend, or is just ready to get the hell out of here and go home. A brave few have been convinced to stay behind for the big competition coming October 1 – 5, which will encompass the entire school and mix foreigners with the insane Chinese students. I declined, but promised to think about everyone as I sip my bucket on a beach somewhere. 🙂 I might even smoke myself by running and doing some pushups that day, just in the honor of the friends I left behind.

I think the hardest part of leaving here in a couple of weeks is going to be leaving the people behind. I have become good friends with people from all over who have traveled here to do the same thing that I am doing: to learn a new way to live life (and survive to tell about it!). The crazy training, injuries, and environment have brought us together. And much like the Army, has built closer bonds than we would normally have developed just as backpackers.

I’ll leave you with a picture of my training group and Sifu. 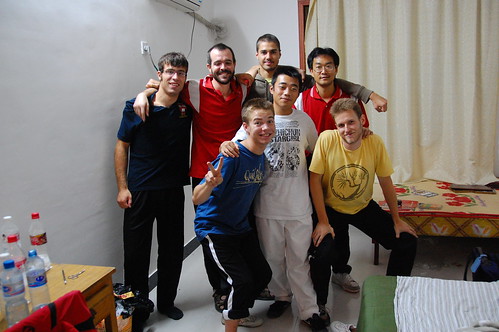 From left to right: (and I know I killed the spelling)

Previous Post: Another Day in Paradise
Next Up: Getting Ready to Leave the Shaolin Temple School