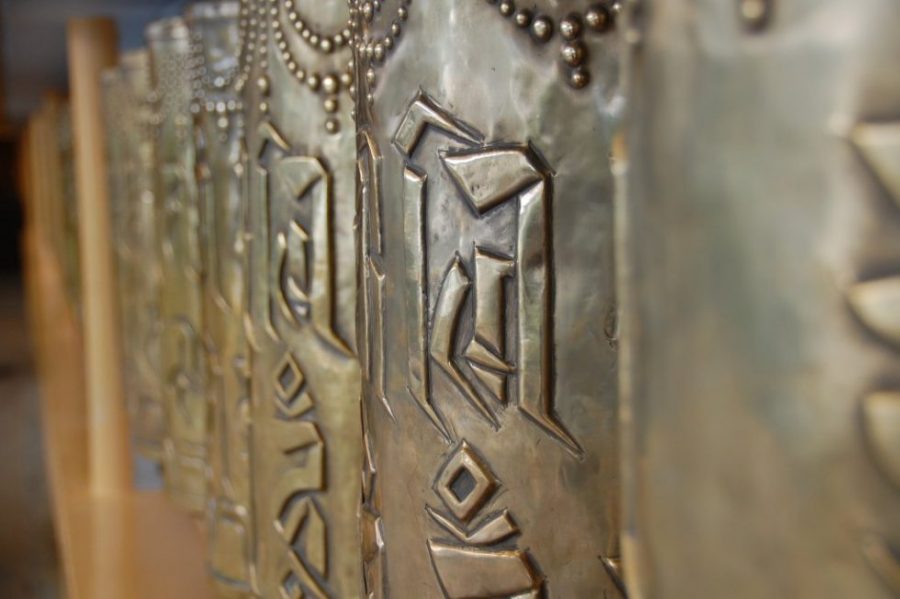 I‘ll never, for the rest of my life, forget seeing the 14th Dalai Lama at home in McLeod Ganj, India, the Tibetans’ home in exile.

And not only did I get to see him, I had an up-close-and-personal encounter on accident. Surreal!

(No photography was allowed, so I’ll just have to share random photos from Tsuglagkhang, the Dalai Lama’s home in North India).

The 14th Dalai Lama at Home

I knew the Dalai Lama was coming when the Western photographers stood and the huddled Tibetans stooped lower. I had just enough time to note this difference.

Murmuring hushed. From my front-row seat, I first saw his entourage of very watchful bodyguards armed with shortened AK-47s; they scanned the crowd nervously enough to even make this Army guy nervous.

And then he walked in. Tenzin Gyatso, the 14th Dalai Lama and most respected voice of compassion in this insane world.

The silly smile on his face made me relax. Waving gleefully to the crowd, he passed a few meters from me. I could see the spark in his eye from where I sat and felt the excited energy of the Tibetans vibrating around me. To say they dearly love their spiritual leader is an understatement.

The 14th Dalai Lama was hurried up the stairs in a flourish of robes to his seat in the temple. For the duration of the teachings, he appeared only as an image on the large TV screen above me. The Tibetans began their prostrations, the monks read scriptures, and all the foreigners began fiddling with their radios and iPods to find the English translation channel.

Although the Dalai Lama speaks English when traveling, he gives talks in his native tongue while home in McLeod Ganj, India, so that the Tibetans get the full benefit. I’m glad.

They worked much harder to reach Tsuglagkhang than I did. Many of the refugees sat around me lost family members and sacrificed appendages to frostbite while crossing high-altitude passes for a month to walk here — all in an effort to escape the Chinese occupation of Tibet.

I may complain about my hellish bus rides, but these elderly people walked across the Himalayas to sit where I was sitting. Unlike us Westerners, they weren’t here to update Facebook statuses with bragging rights; they were here because their lives depended on escaping the Chinese government. 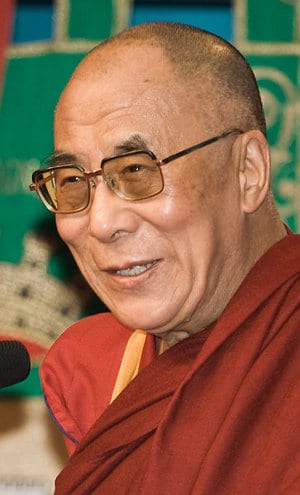 The sun-weathered faces of the older Tibetans each contained a road map of life-experience lines. Their eyes erupted into  wrinkles when they smiled.

I hardly call myself a Buddhist, but being in the presence of a human who has overcome what the 14th Dalai Lama has overcome — and can still smile about it — was overwhelmingly inspiring. You can’t help but want to be a better person. At the age of 15 the 14th Dalai Lama was given rule over Tibet; millions of lives he cared about very much depended upon his every decision.

That’s a heavy burden for a teenager to carry.

The 14th Dalai Lama cringes when worms and insects are harmed. How this man — yes, he’s a human being — can still smile while knowing that fellow monks are burning themselves to raise awareness about Tibet is beyond my scope of understanding.

And not only smile, but giggle infectiously. Every now and then he would crack a joke in English, and no matter how hard you tried to remain serious, you had to laugh, too. The 77-year-old man is high on life.

And he stays busy.

Unless you’re a newly arrived Tibetan, getting a private audience with the Dalai Lama is damn near impossible, as it should be. Why should travelers get to tie up this man’s time when heads of state and limping refugees are waiting in the queue? He personally sees every Tibetan that makes it alive to Mcleod Ganj.

Being able to see the 14th Dalai Lama at home, in such a small setting, was a true honor and something that I’ll remember if and when I ever reach his age.

The 14th Dalai Lama has already hinted that he may be the last of the Dalai Lamas for a while. Or if he doesn’t have a successor, that the next Dalai Lama may be someone born outside of Tibet — and perhaps the first female Dalai Lama!

With much controversy, he attests that the Dalai Lama will not be born in any country still controlled by China. Unbelievably, the Chinese claim that their bureaucrats get to select the next Dalai Lama. I dread that day.

If the next Dalai Lama could be born outside of Tibet, that means one of your kids, including your daughter, has the potential to be recognized one day as the 15th Dalai Lama. Good luck!

Seeing the 14th Dalai Lama may have been a once-in-a-lifetime opportunity and I approached it that way. Future travelers may not have the same opportunity I was given on this sunny October day in North India

I wish I had prepared better.

Having been in McLeod Ganj for over a week before the teachings started, I had plenty of time to research where to sit. I even walked to the Tsuglagkhang complex the day before and tried to reserve a spot by putting down a scarf — you can do so, and no one will move it.

Although all the action takes place in the temple chamber upstairs, every centimeter of the limited floorspace was already covered with sarongs and pieces of cardboard to reserve people’s places. I ended up putting my scarf down upstairs behind the temple room, without view of the Dalai Lama but quite close to him through an open window. 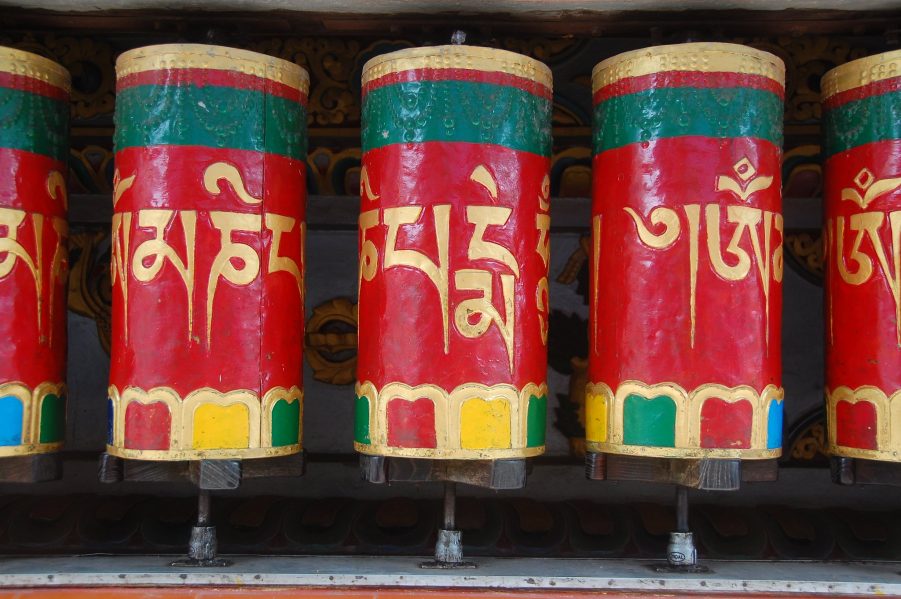 When I went to my spot on the day of the teaching, 100+ eyeballs belonging to 50+ Tibetan monks sat staring at me; all had comfortably planted themselves around my scarf, careful not to disturb it. They were probably curious as to which of their order had purchased such a nice piece of fabric.

That’s what I get for not asking someone before choosing my spot. Although the monks were probably friendly enough not to say something, I really didn’t want to be the only idiot tourist sat in a sea of maroon robes. I tiptoed through them, grinning, retrieved the scarf, then began retreatinh downstairs with tail between my legs to join the people not savvy enough to reserve a seat.

But then the commotion began. I lucked out when, amid total confusion, a bodyguard squeezed me in front of the crowd and told me to sit. He was big and armed, so I sat without comment.

It was rock-star, front-row seating, granting me eye contact and a smile when the 14th Dalai Lama entered. 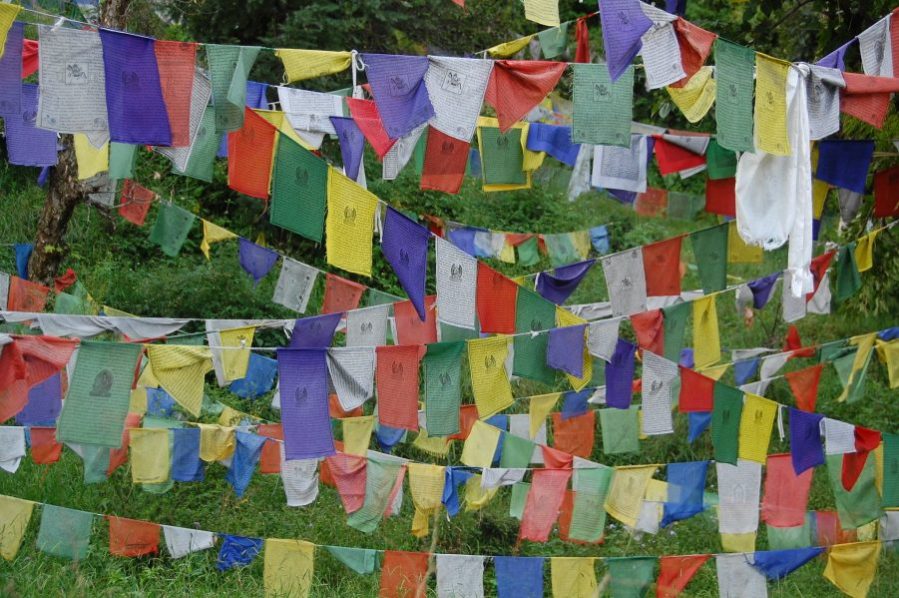 Unfortunately for me, this particular talk was requested by a large Taiwanese group and quickly turned into a very technical discussion on the finer points of Buddhism, rather than the 14th Dalai Lama’s typical topics such as peace and nonviolence.

A few backpackers, what I call the “spiritual travelers,” around me picked at their piercings and dreadlocks while pretending to be enthralled, whether they understood or not. I was utterly lost so soon began scanning the crowd. I searched those brown, deeply lined faces for old men and women who had appeared in the numerous documentaries I watched earlier at the museum in McLeod Ganj.

My daydreaming was interrupted when monks came through with huge pots of free butter tea. Seeing a chance for a new cultural experience, I quickly produced my plastic cup I have carried since adventuring in Malaysian Borneo.

The monk poured me a steaming, generous helping of Tibetan butter tea.

The smell hit me in the face almost immediately. I knew that I was in trouble. Gingerly, I lifted the burning cup to my lips, and the first sip sent my taste buds running for cover. My stomach closed, growled some indecipherable insults, and left me holding this cup of stink.

I’ve consumed some disgusting stuff while traveling the world, but Tibetan butter tea was enough to cause instant gag reflex. I’m disappointed in myself but couldn’t control it!

Wow. I’ve learned to love Tibetan culture while here, and I like the food, but their staple tea is revolting. Yellow, salty, globules of fat float on the surface. It smells like a barnyard animal’s hooves were set on fire. Butter tea is definitely not my cup of tea. Funny enough, years later after reading Supermensch: The Legen of Shep Gordon, I learned that the 14th Dalai Lama also hates butter tea!

To my horror, I realized that I was surrounded by Tibetans who had not only finished their over-sized cups, they were alternating between smiling at me for trying their favorite tea and literally licking the clinging fat off of the rims of glasses.

I was committed, so I held my nose, chanted some mantras for strength, and drank it down between gag reflexes. A week later the taste was still circulating somewhere in hidden cavities around my head. I’m quite sure my travel cup is permanently ruined. No amount of washing can remove the smell.

Despite writing about Asian culture for years, I should have known better than to finish my cup of butter tea. Before I could stop it, a smiling monk topped me up with another glass!

After Seeing the Dalai Lama in India

Not feeling so well after the butter tea incident, I patiently waited for the 14th Dalai Lama with a hope to see him again on his way out at lunch. Yes, he eats. Unfortunately, he was hurried into an SUV and driven through the crowd with little fanfare.

He waved through the glass as the driver fiddled with the radio. What music would you select with the 14th Dalai Lama in the backseat?

I guess I was hoping for men wearing the strange traditional hats, blasting low notes through ridiculously long horns and bashing cymbals as they did once upon a time in Lhasa when the Dalai Lama made an entrance.

I hope and pray that one day the Tibetans will be free again. 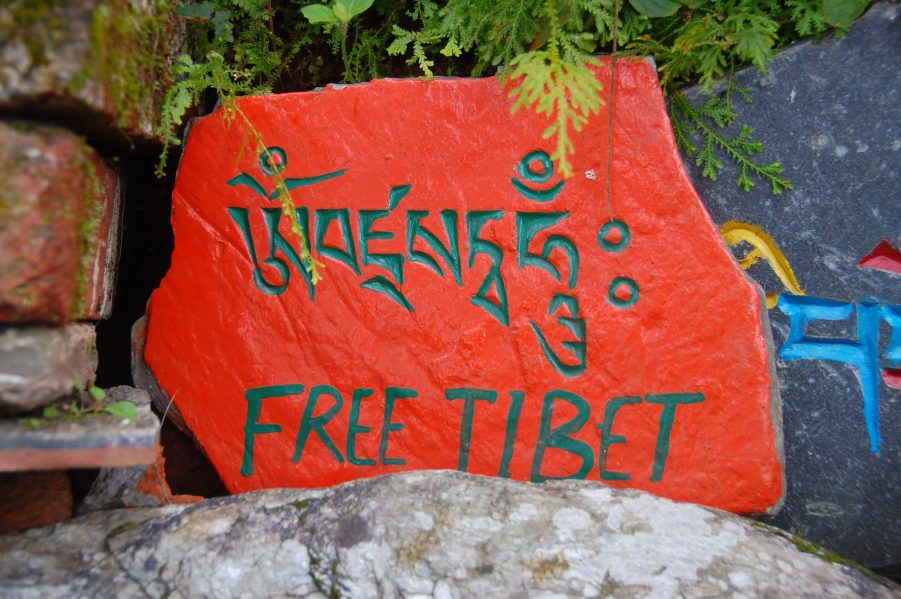 Previous Post: Paharganj in New Delhi, India
Next Up: Getting Sick in India and the Wandering Flute Salesman