Cycling in Yunnan, China: An Adventure 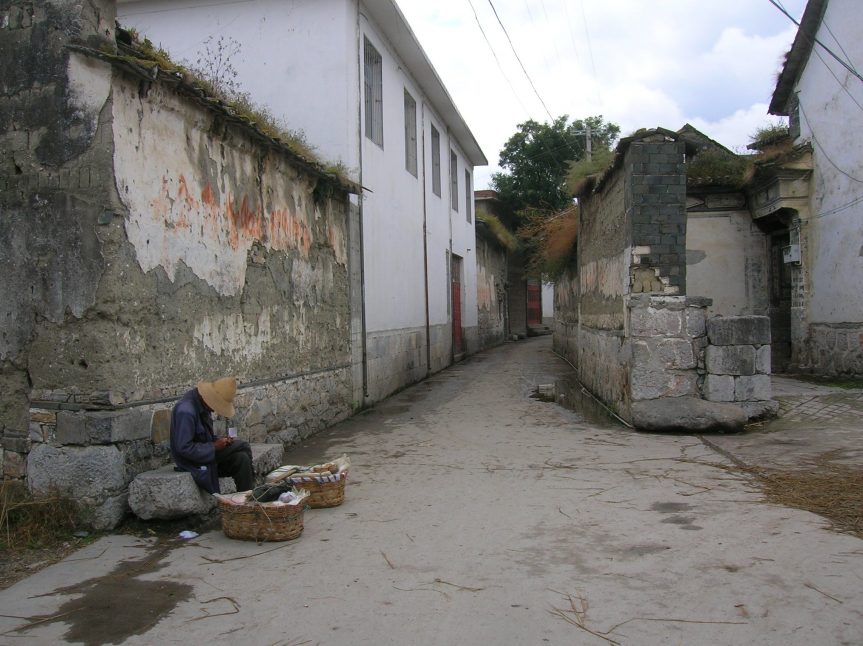 I bounced around a muddy corner on my mountain bike and nearly ran into the side of a water buffalo. The stupid thing barely looked up and just went back to its never-ending chewing.

And so it went on my cycling in Yunnan, China, one of the best adventures I’ve had in the past few days.

After breakfast, I hired a bike for US $1 and decided to go find an adventure like the good ‘ol vagabonding days. The day was sprinkling rain, as usual, but I took my chances anyway and hit the streets.

That bike was the best $1 I have spent so far!

I got out of Dali in about 20 minutes and rode through the north gate onto the main road. I could see the enormous Erhai Lake just off to my right, so I made a direct path for it.

On the way, I passed rice field after rice field, all full of animals and workers toiling in the land. They were standing in knee-deep mud, and their pitchforks never stopped moving through the air. These people work hard! Never mind that today was Saturday. No such thing as rest for these men and women; they were too busy working to feed themselves and the rest of their fellow countrymen that live in the cities.

I stopped off in one roadside shop for some water and ended up talking to a very nice Chinese guy for almost 30 minutes. He spoke about as much English as I do Chinese, so we met in the middle — and it worked! Never believe that the language barrier has to stop you from enjoying nice cultural interactions.

We were both 32 years old, only he had a shop, wife whom I met, and two adorable kids. He bemoaned his financial situation. And here I was cycling around Yunnan on a bike in the rain. He didn’t understand, I think, but we joked about how old we were both getting and how crazy life really was.

This was probably one of the best interactions I have had with locals so far. My old Chinese teacher at the Shaolin school back in Deng Feng would be so proud!

I made my way down to the lake and took a muddy path through the tiny villages that are strung out all around the lake. The narrow, brick streets were even more maze-like than the hutongs in Beijing. I was riding through a very small farming community, and the structures were ancient.

The smells of wet earth, straw, and flowers mixed in the lake breeze. It has been raining so much that most of my time was spent watching my front tire to avoid wiping out in a muddy mess. From both sides, Chinese kids would yell “Hello?” in a question form, like they weren’t sure if it was correct or something. They were shy, as if they said hello wrong, my neatly folded demon wings would pop out of my back, and I would carry them away for eating. When I would smile and return their hellos, they would be so overtaken with excitement they would cover their faces and jump up and down laughing. At one point, I had about 10 kids chasing me on my bike through the streets. I would slow down to let them almost catch up, then start pedaling again, causing an eruption of giggles.

My cycling adventure in Yunnan went for nearly seven hours total, and it was obvious that my bottom was going to be not so happy about it in the morning. I made a circuit around the big lake and visited Xi Zhou where I found a tiny market square and the best jiao se (pork dumplings) I have eaten in China — for 40 cents!

This definitely goes on my list of best vagabonding food ever. 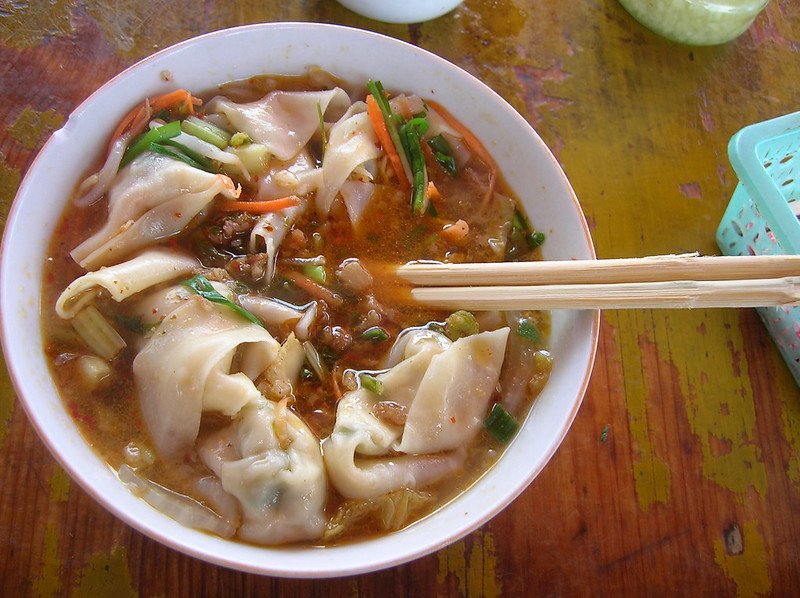 I then made it to Zhou Cheng, another village just large enough to have two petrol stations. I was running out of time before dark, so I started back on the upper road, which is smaller and rougher.

The rain decided not to cooperate and escalated from a refreshing mist to nothing short of a torrential downpour. I was drenched from head to toe. People were staring at me from the dry safety of their front porches. From what I’ve seen during my months here, the Chinese definitely do not like to get wet!

Even the chickens were smart enough to join them on the porch and looked at me blankly as I struggled by with my bike.

I had enjoyed nearly three hours of a downhill coast on the way to the lake. Now, I had to pay the price and grind back up the stubborn hill. Damn your laws, Newton!

As the rain was running in a steady stream off of my nose, I heard a loud pop! My bicycle had decided to give up before my quivering legs did. I spent nearly 20 minutes in the pouring rain trying to get the broken chain back onto the gears properly, and when I finished, I was covered in slimy grease that eventually made its way to my face and everything else that I touched. Nothing like making expedient field repairs while in a downpour.

The rain stopped just before I crested the sizable hill. I stopped to catch my breath and collect my sanity for a moment, and hanging over the lake were two distinct rainbows — a double! I was overcome with joy (maybe not as much as the famous Double Rainbow guy who went viral on YouTube, but still).

There was rain between them, but I could see the welcoming north wall of my Dali home below me. I knew that I had survived my cycling adventure in Yunnan and now had some really nice photos to share.

This was an old-school, vagabonding adventure like I had so many of last year, and it reminded me also of why I travel solo and prefer to do things like this alone.

Sure, I love the company when I am at the hostel or in the pub, but this cycling adventure just would not have been the same with another person along, unfortunately. I was blessed to learn a little about the daily life of these rice farmers just by observing as I rode. Had I been with someone else, we probably wouldn’t have lingered as long.