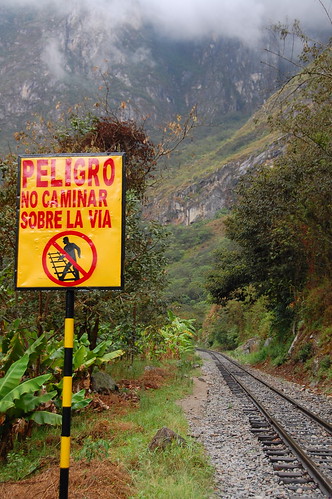 The words from an old army cadence that we used to sing on long road marches filled my head:

I used to date a beauty queen…

and it won’t be long,

…until we get on back home.

This wasn’t exactly a forced march that I was on, but there were some similarities. The cold rain was dripping off of my nose, the straps on my soaked rucksack were pulling on my shoulders, and lots of no-see-ums from the tall, sweet-smelling grass were making my legs their lunch.

The crunch crunch of gravel alongside the railroad tracks we were walking was pretty much the only sound as we put one tired foot in front of the other. We were on a 15-kilometer road march, but no maniac with a whistle was pushing us on…

Machu Picchu and the secrets of the Incas were waiting.

Three vagabonds walking down a lonely set of tracks in a steady rain. Sounds cliche, but it was a beautiful thing. Pure poetry and a scene that is burned into my memory forever. The towering Andes Mountains rising up all around us, a river running around smooth rocks below us, the taste of the high-altitude air, and the greenest beauty that Peru could offer.

Despite the nine-mile walk taking its toll on our bodies, spirits remained high because somewhere around the next bend lay the tiny town of Aguascalientes, the starting point to get to Machu Picchu. 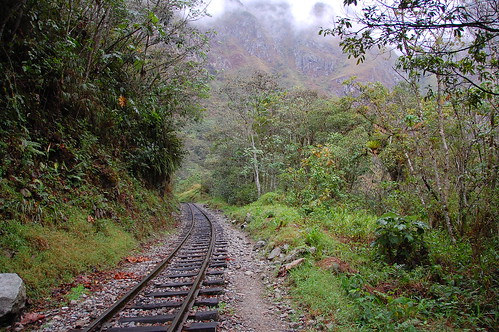 There were alternatives. Like any place as famous as Machu Picchu, there were loads of tours available. Even an overpriced train could have brought us right to town, but we decided to do it our own way and sprinkle in a little side adventure.

After taking a winding-and-sleepless, overnight bus from Cusco the night before, we were deposited in the tiny town of Santa Maria where we were put on a minibus to an even smaller dot on the map named Santa Teresa. From there, we caught a ride around sunrise with a group of men dressed in blaze orange jumpsuits and hard hats that were on their way to work in HydroElectrica, the water power plant.

At the power plant, after checking the compass and getting ourselves ready for what was ahead, we picked up a set of railroad tracks that cut right through the mountains to our destination. The tracks are still active but we made it a point never to get caught on one of the small bridges or in one of the tunnels when the train full of gaping and pointing passengers passed by.

We kept a steady pace, only stopping once to put a few coins on the track to smash them flat, and once to eat a meager lunch of figs on bread while swatting all the biting flies. When it quit raining, the sun came out enough to make everything nice and steamy.

That afternoon we came dragging into town wet and sore, but excited. Aguascalientes had so much potential to be the charming mountain village tucked into the clouds of the Andes, but instead what we found was a tacky, dreadfully overpriced tourist trap with all the tacky appeal of Disney Land. Even the main square, which was brand new, held two life sized plastic Incas that you could pose for pictures in front of. Bleh. 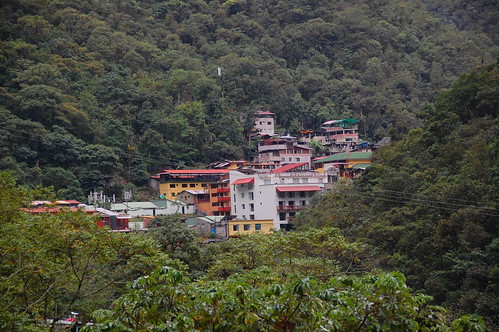 Lucky for us, the town was simply a place to eat, shower, and get a few hours of sleep before the grueling straight-up run to beat the crowds at Machu Picchu in the morning.  Just as a word of warning, if you find yourself in Aguas, take lots of supplies…there are no prices in shops; they make them up on the spot and then shout lower prices behind you as you walk out the door in disgust at their first price. It’s that kind of place and there are no breaks for low season.

The ticket to Machu Picchu cost me $42 because my International Student ID didn’t work. The same card (the best $5 investment I ever made on Khao San Road in Bangkok) worked magnificently and saved me a bundle in China and Egypt — but not here. Unless you get your fake card made in Cusco (US $10) plan on paying full price.

The sting of the price was made worse by the cost of everything else around the place. You pay US $8 for a one-liter bottle of water. You pay to use the toilet after drinking that water, the 15-minute bus is US $7, etc…you get the point.

All expenses aside, Machu Picchu was one of the primary missions of this short trip to South America and now I found myself with two Slovakian friends met in Indonesia earlier this year and just a little over an hour away from it.

Literally hundreds of hours on bouncing chicken buses crossing Colombia, Ecuador, and Peru were about to pay off.

Surreal. I strained my neck and tried to see the mountain tops hoping to catch a glance of some ruins through the clouds but had no luck, the Incas did one hell of a job hiding their “Lost City.”

It was easy to see who had already been to the top. When they stumbled back into town in the evening while we ate dinner and watched, their heads bounced from side to side like a spring had replaced their weary necks and their wobbling legs barely held up their dirty torsos. Aside from the ones that paid for the buses, every single one looked spent, and it made my heart beat faster just thinking about what adventures wait at the top of the mountain.

No doubt, we were going to have another exhausting day tomorrow, but I looked forward to being one of the wobblers rather than one of the newbies waiting their turns in town. I wanted more than anything to be on their side of the fence.

Maybe it’s the excitement of seeing this hidden 2000-year-old city, or maybe the elevation has finally gotten to me, but I can’t stop smiling….wow. I love my job.

UPDATE: I’ve got full details on how to do the walk along the tracks yourself without using a tour here:  Travel to Machu Picchu.

.
Previous Post: Into Ecuador
Next Up: Machu Picchu, Peru