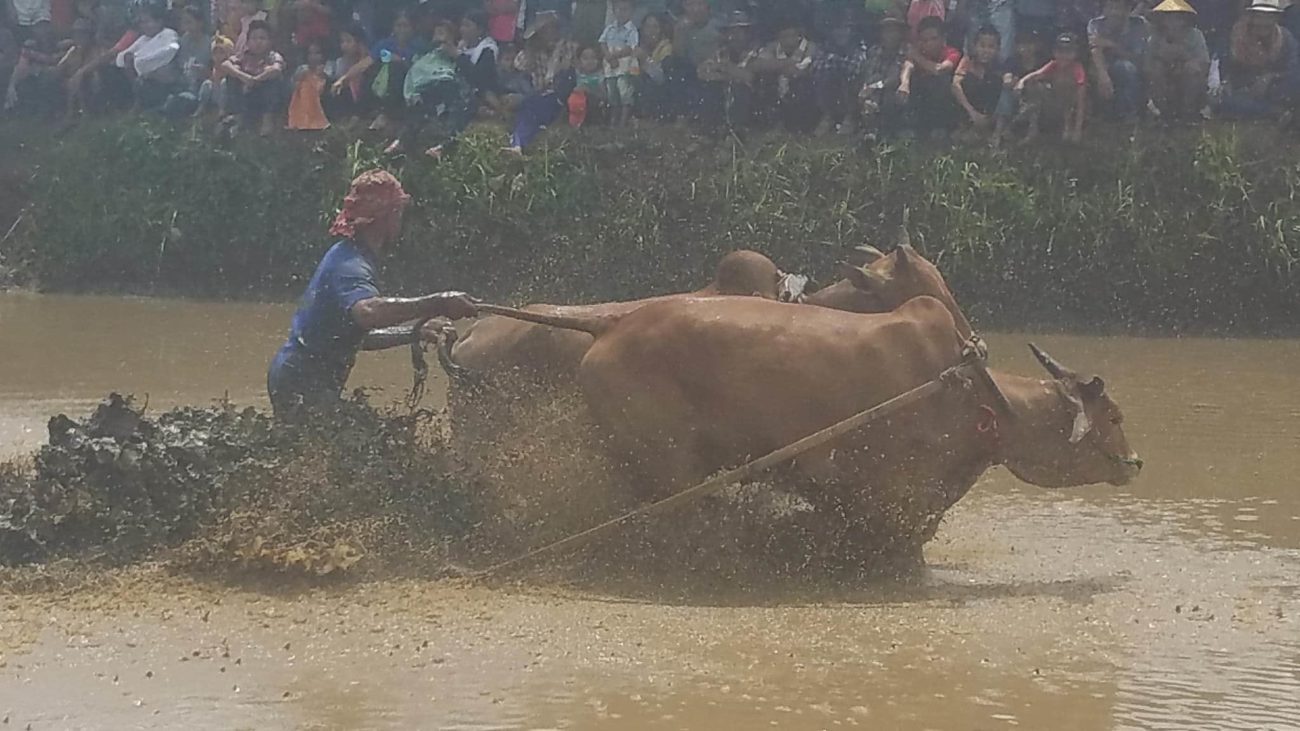 These lively, muddy (and potentially dangerous, depending on where you stand) events serve as a fun excuse to gather and socialize in rural places throughout West Sumatra.

Finding the more remote pacu jawi cow races can be a challenge, especially for visitors. Regardless, if you’re traveling in West Sumatra, start asking around about the next pacu jawi meet; it’s a cultural experience not to be missed.

This is my story of seeking out a traditional cow race in West Sumatra — serious fun!

I was the last in the three-motorbike convoy that left the Harau Valley at high speed. I kept up for maybe an hour or so before the mad tentacles of Sumatran traffic separated us. It came in waves of maniacs wielding steering wheels. There was no journey-to-Pai fahrvergnügen. The green tranquility of a beautiful valley was forfeited, but for good cause:

We were going to watch pacu jawi, traditional cow racing in West Sumatra!

Sumatran cow racing is a sport so obscure, even ESPN8 doesn’t air it at 2 a.m. It doesn’t even make the time slot after competitive knitting. But despite the obscurity, cow racing is fun, wild, muddy, social business.

Along with climbing an active volcano in Sumatra, attending a pawu jawi cow racing meet was definitely a highlight from my month of traveling this big island. 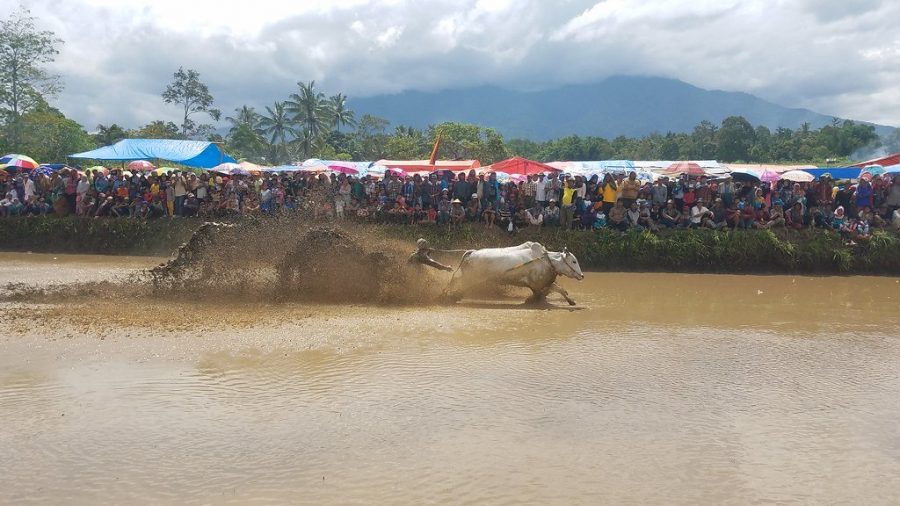 Pacu jawi is seasonal. Venues rotate between weekends, provinces, and rural villages. Being in the right place on the right Saturday to catch pacu jawi just doesn’t happen easily.

Somehow, it happened. So, when I heard about the race just a few hours away, I grabbed a map, motorbike, and stored my stuff at a guesthouse. I even managed to convince a couple of new friends from the guesthouse the cause was worthwhile.

In life and vagabonding, he who hesitates is lost. Always go where the action is.

Cow races are held in big, flooded rice paddies on farms. They serve as fertile social scenes, allowing for the spread of gossip, garbage, dung, and flirtation between young people from different villages. There are no signs directing the way. It’s one of those things that the locals just inexplicably know about through a disturbance in the Force.

And as I found out, races aren’t configured for people who are unaccustomed to hours beneath the Sumatran sun. Take some serious UV protection; sunscreen won’t cut it!

Cancerous skin mutations may be forever, but so are pacu jawi bragging rights. 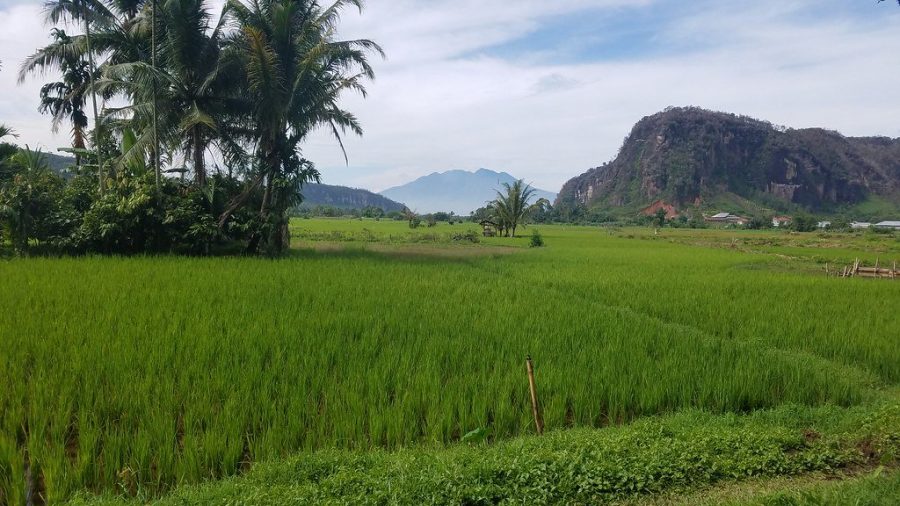 Getting to the Pacu Jawi Race

Now, on a bright, beautiful, Saturday just a few miles from the equator, I found myself in a hurry to locate the muddy mayhem. I’m a vagabonding traveler. There was no choice. The Road forces you to be honest and true to yourself.

If I knowingly missed something this rare and cultural, my head would probably pop off my shoulders.

Fighting for breathing room on the jammed roads of Indonesia’s largest island requires a dance, but it’s no graceful waltz. Instead, driving here is more like a goofy square dance with Satan stomping time and acting as caller. Everyone’s smiling and having a ball. Regardless, one ill-timed do-si-do could replace your collarbone with the mangled fiberglass carriage of a motorbike.

Knowing that a travel insurance claim is just a miscalculation away at all times keeps an intravenous cocktail of cortisol and adrenaline in one’s veins.

Driving in Asia is not for the faint of heart. Driving in Sumatra may require numerous therapy sessions afterward.

Obstacles ranged from giggling Hello Kitty fans to furry, unidentifiable mammals. All seemingly wanted to end their lives beneath my tires. Ferret, mink, civet, school girl…I narrowly missed something that would have made one hell of a speed bump at my velocity. 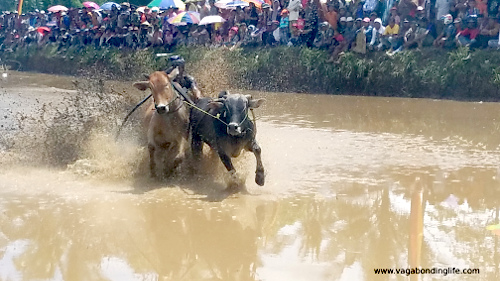 Getting Directions to the Pacu Jawi Cow Racing

I ceased the chase. There are only so many blind, consecutive, high-speed, head-on, lorry passes one man can make on an Indonesian morning. I overtook one large truck only to end up behind another one. Sumatra seemed to be nothing but overweighted trucks slowly plodding along on roads barely wide enough for their wobbling tires. Everyone seemed to have one. I’m convinced Sumatran teenagers are handed the keys to aging family dump trucks on their 16th birthdays. Thanks, Mom and Dad!

A bony finger pointed at what looked like someone’s bumpy driveway. The farmer giving directions seemed like the right man to ask, so I proceeded. His adam’s apple swung low from his neck like a turkey’s.

Leaving main roads behind, the path dwindled down to sidewalk width. How could an esteemed sporting event such as pacu jawi be found down such insignificant footpaths? Doubt set in, but each time I asked for directions in Bahasa, I was told to proceed just a little farther.

Eventually, directions were no longer needed. The cows had laid an easy-albeit-smelly trail to follow. I literally followed their green splatters until I was directed to a parking area crammed with motorbikes. 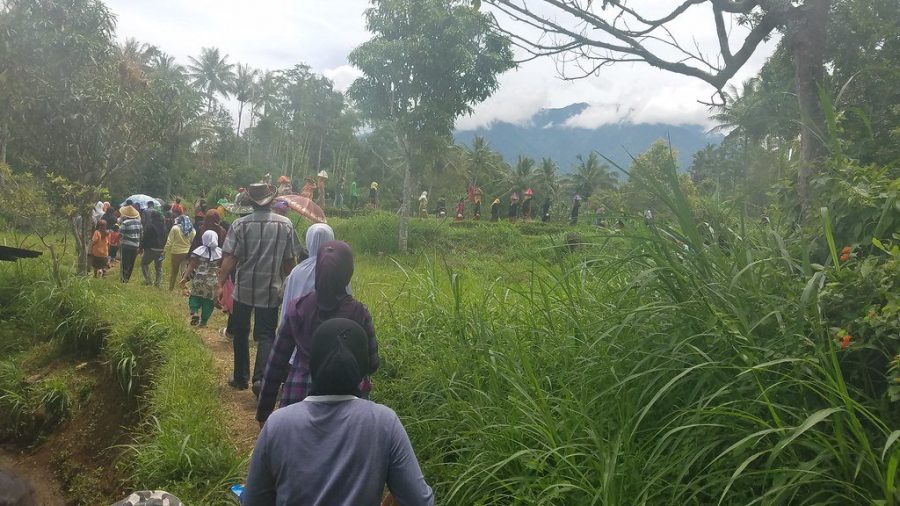 Right on time. I rendezvoused with my German friend Fabian and Dutch friend Loraine just as villagers were snaking solemnly through the rice paddies. As the only three Western anomalies, we joined their ranks. We milled around the main area for a while, under much scrutiny. Everyone wanted to shake hands, say hello, take selfies, become Facebook friends.

Attention levels hovered near celebrity status. But just before the race began, we relocated to the opposite side of the field. This put the race between us and most of the other spectators.

Although we were in a “legal” spot to watch, we were also now on the same level as the cows. Gone was the protective berm that separated spectators from crazed cows. We perched on a three-foot-wide strip of precious real estate with a steep incline behind and thigh-deep mud in front.

Brave men wrestled with steers at the starting line. Teams went whenever and however they could. There was neither officiating nor very many rules. “Winning” was a matter of putting on a brave show for the crowd. 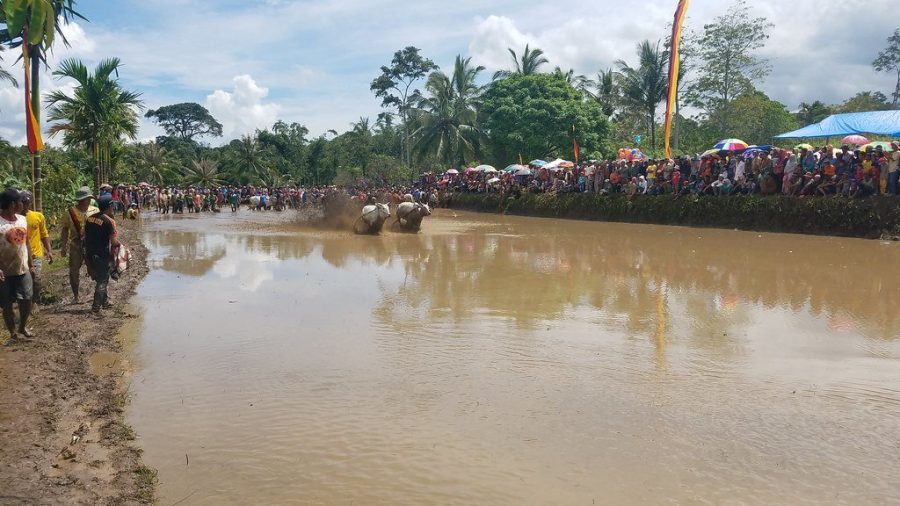 Chaos prevailed. Jockeys bit the tails of cows to get them started, then held on for dear life — tail in each hand. They skated across the mud in our direction. The cows weren’t harnessed together in any way; jockey legs were often pulled in painful directions.

Many cows broke free and ran amok — sometimes in our direction. More than once we were forced to jump down the incline to escape snorting, huffing, stomping, bovine rage. 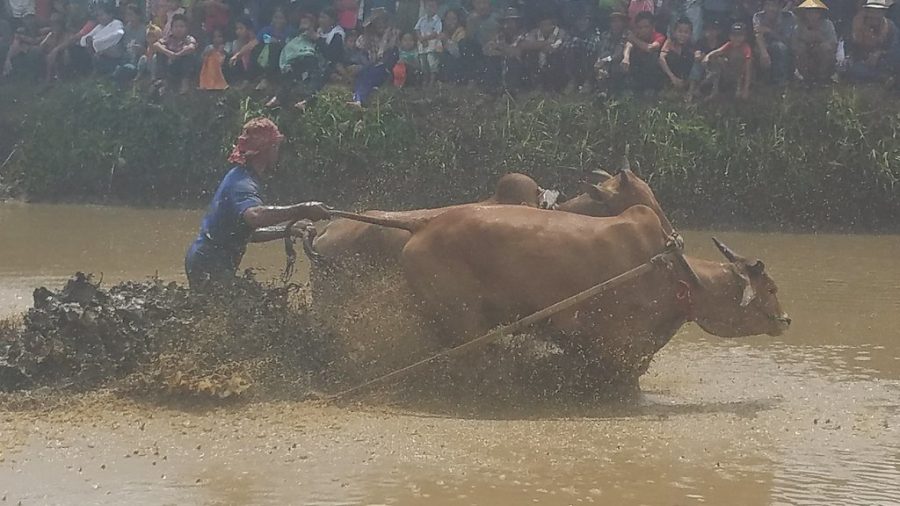 Tidal waves of mud mingled with feces splattered us. Jockeys gave high fives to each other, only white eyes showing. We alternated giggling with glee and fleeing in panic as steers thundered our direction.

Although these ploughing cows were sold rather than consumed after the race, the feeling reminded me of running with the bulls in Pamplona. And getting stomped by yaks in Nepal last year. Unintentionally, taunting heavy beasts with hooves and horns has become my new thing.

All in all, I’ve seen some weird gatherings in far corners of this world, but getting to attend a pacu jawi “fast bull” race was a blessing.

For one afternoon, it distracted a few hundred good people from the tiresome binds and duties of poverty. This may as well have been the Kentucky Derby of West Sumatra. Spirits were high for all of us. Isn’t that all that really matters — no matter the locale?

The cool sunset air soothed stinging sunburn as I raced daylight back to Bukittinggi.

Previous Post: Climbing Gunung Marapi in West Sumatra
Next Up: Vagabonding Resumes: Back in Bali