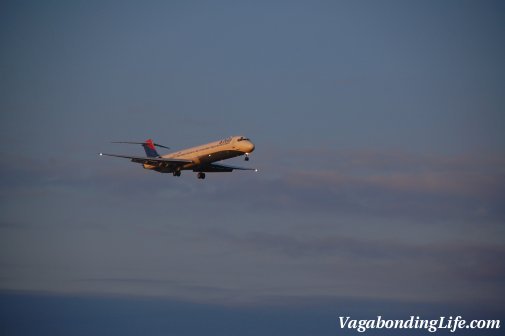 Finding cheap domestic flights is perhaps even more of a dark art than getting a good deal on international flights for me lately. I’d rather pay a hefty sum to cross the Atlantic or Pacific than the same amount to bound across a few only semi-interesting states. At least a continent change is worth selling blood, plasma, and bonus internal organs to cover the ticket.

Actually, if I had a halfway efficient vehicle, I probably wouldn’t even fly domestically. A temporary romance with gloved goons in airport security just has a way of taking the magic out of a Fear-and-Loathing-style roadtrip somewhere west of here.

Unfortunately, when I do fire up my aging, V8 5.0-liter engine, Arabs increase oil production (and high five), baby seals scream in Canada, and an iceberg melts in Antarctica. I may as well take a 747; our carbon footprints are roughly the same.

During a layover in Chicago last year, I met an older gentleman who had been wearing a fedora since before it was hip. With a reminiscent twinkle in his eye, he shared stories of flying around the U.S. on $50 tickets. Despite being retired, he still dressed his best to fly. The guy just oozed class and life experience.

Per the gentleman, flying back when Sinatra was jet-setting around the U.S. was one big party. Even when flying for leisure, men wore suits, choked the cabin with smoke, and drank like it was New Year’s Eve.

People passed out from too much fun on their flights rather than bad movies or deep vein thrombosis.

Women roamed about socializing with sidecars and Singapore slings in gloved hands, while attendants offered a wink and a smile with edible food. Compared to the pretzel-slinging, grumbling service I got on Delta last year, I can only daydream about what it was once like to actually look forward to a flight as a fun activity.

Then again, who can blame the overworked attendants when nearly half of our domestic airlines in the U.S. are either bankrupt or heading that way fast?

So, while finding cheap domestic flights is not easy, here are three not-so-secret tips that I frequently use:

So while searching for cheap domestic flights may be not be easy, to quote Morpheus from The Matrix: “…some rules can be bent, while others can be broken.” Don’t give up!

Just for fun, read about my bizarre flight to Bangkok via Japan last year.

.
Previous Post: Vagabonding: How to Meet People
Next Up: Can’t Afford to Travel? Think Again!