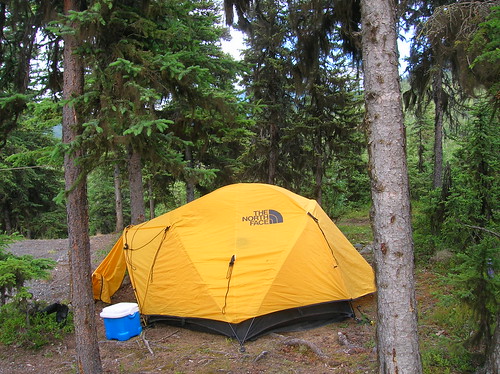 I did not waste any time in getting outdoors once I arrived in Alaska. I arrived at 10 p.m. last night and already this morning we are packing up tons of gear to hit the mountains for a two-day camping trip. My excitement and adrenaline so far are successfully overriding my jetlag (four-hour time difference) and tiredness from the eight-hour flight.

We arrived at our campsite late in the evening, but with non-stop daylight and reservations, no one cared. It was 4th of July holiday weekend, so the place was buzzing with campers and people busy setting up their campsites. Our campsite provided an incredible view through some trees of the snow-capped mountains and the air was extremely clean and a treat to my lungs. The mozzies were so thick that a random swoop by your hand through the air would render several KIAs once I clapped my left hand over them. They were relentless and much good blood was lost to their feeding, but I cant blame them. If I had a 48-hour life cycle, I would be quite the bastard about eating as well!

Speaking of eating, Alaskans take their camping very seriously here. There were no MREs or crappy wieners roasted on sticks with marshmallows for dinner. Forget the Smores. It was a full-on feast of chicken, penne pasta with marinara sauce, salad with Greek olives, and a multitude of other delicious edibles. We definitely did not go hungry. There were six of us camping and two dogs, but there was enough food to sustain us through the winter I think.

I walked down to the Russian river with my friend Jess which runs through the campground and we passed dozens of people still fishing or on their way to fish. It was around midnight but no one cared — there was enough daylight not to need a torch and the water was too beautiful and inviting.

We passed some fishermen who said there was a grizzly about 100 meters up the trail and across the river, which isn’t very wide. We took off down the trail at a run, hoping to catch my first glimpse of such a dangerous animal but arrived a minute too late. He had already lumbered off into the woods on the other side of the water but had left the half-eaten salmon carcass laying on the shore. Still, being so close to an animal that I have only read about and saw on late night Animal Planet horror shows, got my blood flowing.

We walked back to camp, and despite a drop in temperatures — to around the low 50s — I stayed very warm with all the quality gear that our group provided to me. As mentioned, camping is a deadly serious hobby in Alaska.

Previous Post: Vagabonding in Cambodia
Next Up: Fishing the Kenai River