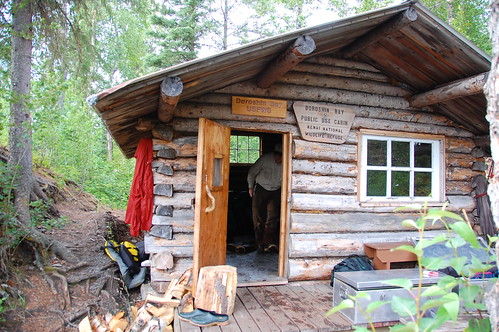 Our cabin had been refurbished since whatever hard-core, backwoods guy had built it, but the original frame was there. The great thing about remote trapper cabins in Alaska is that you can reserve and stay in them for free.

Skip got a fire going and I gladly traded my wet clothes for some new ones. We had bloody, campfire-cooked steaks that were two inches thick and dripping juices into a sizzling fire. The smell was no doubt traveling for miles, and maybe making other mouths water besides just our?

After the best meal I have ever enjoyed while camping, morale slowly and steadily improved. There were only two bunk beds inside, so I made my bed on the smooth, wooden benches of the picnic table. Hard, but after a day like today, I could have slept on nails. 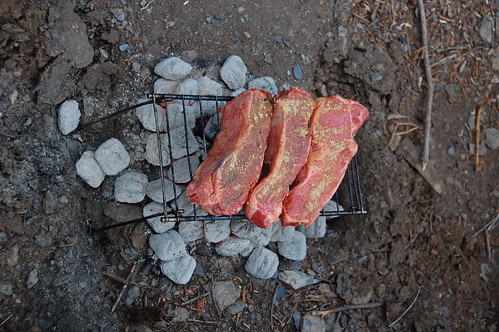 Our cabin was simple as expected but very practical. There was a wood-burning stove (which we never used), bunk beds, a table, and some shelves where people had left things such as mozzie spray and hand wipes. cabins are free to use for the public, but you are supposed to reserve them rather than just take chances by turning up. There was no lock; everything was on the honor system — which I like.

There was a log book inside the cabin that loads of campers had signed. It was very intriguing reading all of their tales; many had sighted bears around the cabin. Some people from the Discovery Channel show Risk Takers 2 had just stayed there a couple of weeks prior. There were also logs of bear hunters (the kind that use guns, not cameras) and even people on their honeymoons. Only in Alaska would you have to worry about grizzly bears on your honeymoon — my kind of state! 🙂 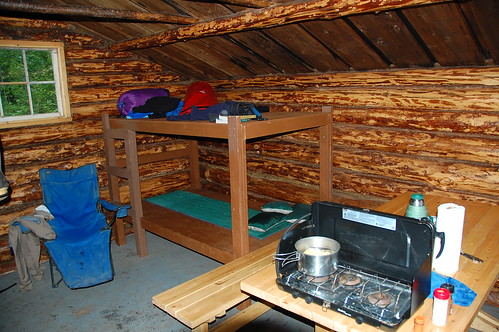 After dinner, I went looking for trouble.

I walked up a narrow game trail behind the cabin to the top of a hill so that I could get a better vantage point. The smell of steak was still strong on my clothes and fingers. I half hoped that it helped in my hunt. I was armed only with my camera and my Kabar marine’s knife, which would probably barely tickle a bear’s ribs. I have spent 3.5 weeks total in Alaska wanting a bear encounter, and am starting to consider hiring myself out as a human bear repellent of sorts. Can it really be that hard to find a grizzly? Once again, my hunt proved futile, but the view and the clean air I was breathing into my lungs made it all better. 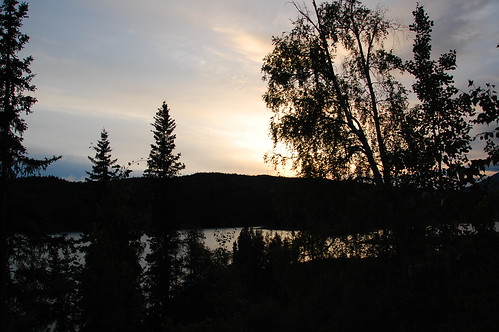 I sat on a rock and watched the sun go down around midnight. The days are slowly getting shorter after perpetual daylight through the summer. A snoring competition that was already rattling the walls of our cabin. I didn’t care…I was asleep in minutes.

Previous Post: Wet, Cold, and Happy
Next Up: My First Brown Bear Encounter in Alaska!