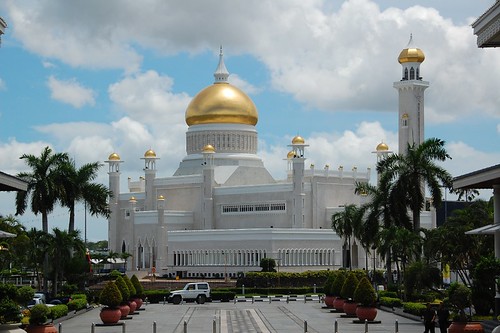 I didn’t think anything of the harmless photograph taken of the busy street corner. A green sign with Arabic beneath advertised “Jalan Sultan” — the street name. Behind the sign was a Dairy Queen — the first and only one that I have ever seen in Asia. Dairy Queen is an ice cream / fast food chain found in nearly every small town in America.

As I lowered the viewfinder of my camera from my eye, a man with a two-way radio and uniform was standing toe-to-toe with me.

“Excuse me sir, you must follow me.” Smiling and friendly enough, but it was obvious that he was serious. I’m no longer a travel greenie to even advanced scams like the false-police-officer gig.

I decided to stand my ground.

“Please let me see your camera.” My scam defenses were now in full-alert. There was no way that I was handing this stranger — no matter how much he smiled — my SLR camera. The words “piss off” were just forming on my lips when he surprised me with what came next.

“You have just taken a photograph of a US Embassy.”

I glanced at the credentials hanging around his neck — he wasn’t joking. A sense of dread began creeping around the back of my neck. Grizzly bears, Komodo dragons, poisonous snakes…I would rather face all three together in a head-to-head death match than to tangle with the insane, paranoid juggernaut that is American bureaucracy.

I had been in Brunei — the smallest country in Southeast Asia — for less than 24 hours and found myself innocently standing in deep $#*#.

Never losing his friendly smile, he raised the radio: “This is 14, I have the suspect for questioning.” 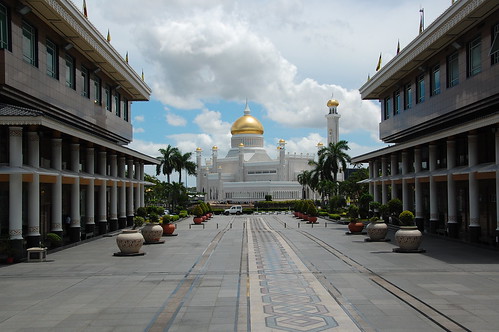 After recovering from the rainforest and doctoring my leech bites in Miri, I decided that it was time to say goodbye to Sarawak. Malaysian Borneo is divided into two states: Sarawak and Sabah. If Sarawak is the shy, quiet kid picked on in school, Sabah would be the popular, good-looking school quarterback.

A majority of tourists go to Sabah and feed the ubiquitous tour agencies while they discuss their “adventures” at a Starbucks or McDonalds. Museums are usually free in Sarawak; they cost $10 or more in Sabah — you get the idea.

Needless to say, I have a feeling that I will soon be missing Sarawak. Regardless, every vagabond knows in their gut when it is time to move on; to ignore your gut is a serious offense on the road and can be harmful to your health.

The tiny, oil-wealthy country of Brunei divides Borneo and separates Sarawak from Sabah. Despite being a little more expensive than Malaysia, I decided to cross it. Why? Just as George Mallory proclaimed about Mount Everest: “Because it’s there.”

I grabbed a bus to the capital of Bandar Seri Begawan. No, they don’t fool around with city names here!

Brunei was excessively friendly — and it should be. The people enjoy a higher quality of life than most of Southeast Asia. They love their Sultan, the same Sultan that lives in the largest palace in the world (five times larger than Buckingham Palace even!) They also pay no income tax — you keep what you earn.

The riches come from Shell which taps into the abundant oil reserves both on the mainland and offshore. Non-coincidentally, Shell is also the only petrol station found in the country! 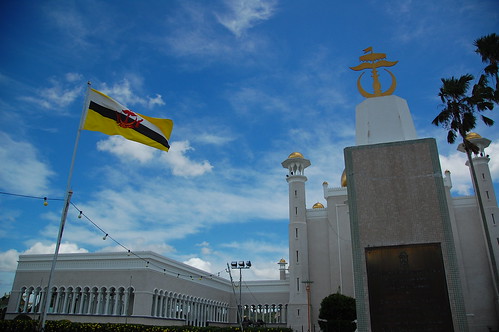 There is a crazy amount of oil in Brunei. Oil wells pump away quietly in parking lots, offshore platforms line the beautiful horizon, and expats from many different countries come here to work. Nearly everyone has some tie to the oil industry. When Malaysia offered to absorb Brunei in exchange for a cut of the oil money, the Sultan politely said “no thanks…we’re doing just fine.”

I came to Brunei expecting a Singapore, but instead found a beautiful country that is — for the most part — untouched. They have diving, national parks, and modern cities, but for some reason people don’t really come here. Fine with me, they would do well to stay off Lonely Planet’s radar for a few more years.

This is also the most Islamic-practicing country in Southeast Asia. Beautiful mosques belt out prayers throughout the day with exuberance and volume. Arabic is taught in the schools here and appears on nearly every sign. Needless to say, Brunei has a completely different vibe than Malaysia.

So on my first walk out of my dirty little budget hotel, I found myself being questioned by Homeland Security personnel.  In less than one hour I was now a “suspect” — a new personal record for me!

They took some mugshots of me against a wall, took pictures of my camera, and deleted my one photo of the street corner. When I mentioned that my passport was hidden in the hotel room, I was asked to produce another form of ID.

The only thing I had was the fake student ID made in Bangkok so that I could receive student discounts while traveling.

I couldn’t help but giggle as I handed a fake ID over to a bunch of guys that could probably crush me. The stupidity of the entire arrangement was astounding. The French, Dutch, all had proper embassies in stand-alone buildings with barbed-wire fences just outside of the city. Who the hell is going to mess with the French?

Sure, I understand the need for embassy security, but why put the bloody thing in a busy shopping mall on a street corner and then try to disguise it by not hanging a sign?

Overall, I was treated very kindly and we actually had some laughs together, even though I was unnervingly still being referred to as “The Suspect.”  After far less paperwork than I expected, I was released and even got to keep my camera — bonus!

For the rest of the day I couldn’t help but glance over my shoulder, always looking for a guy with 1980s aviator glasses and an earbud.

Later that evening I was cheeky enough to sneak back to the embassy corner — with camera stored in my backpack of course — and treated myself to a high-security Blizzard. Yum. Now that is good use of my tax dollars.

I’ll leave you with a great sign spotted on the street (not near Dairy Queen thank goodness!). 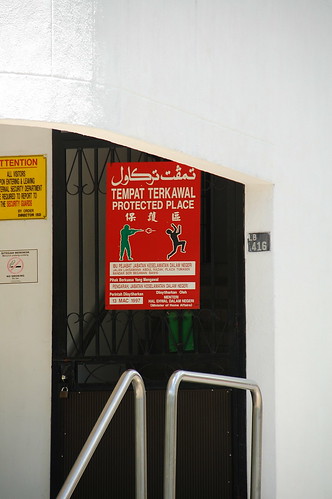 If I’m not mistaken, it looks like a picture of a soldier, holding a US-issue M16, and popping an unarmed man who is running away in the back.

Remind me not to take any more pictures here. 🙂

.
Previous Post: Back to the Forest
Next Up: Up a Wild River in Borneo