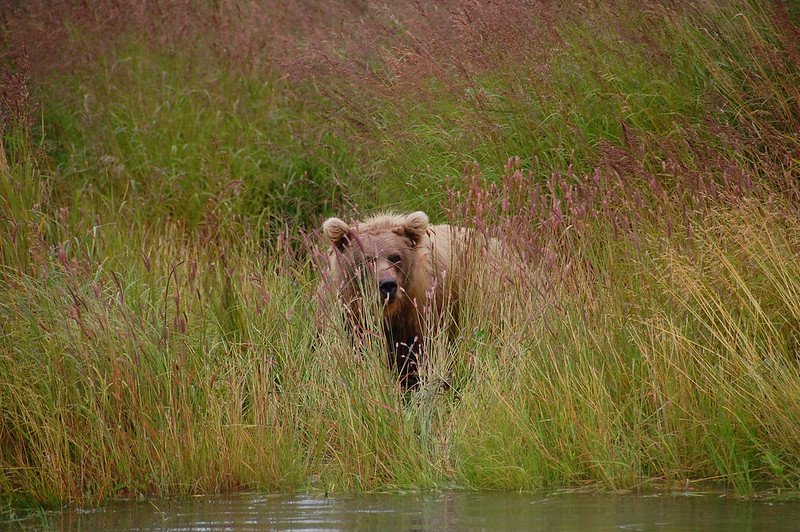 I had my first up-close-and-personal brown bear encounter in Alaska!

Even writing about this now makes my heard beat a little harder.

Skip (an Alaskan friend), my father, and I had float fished down the impressive Russian River for two days into middle-of-nowhere Alaska. The remote Skilak Lake was mostly only accessible via float plane or two-day paddle.

After breaking camp and making our way across a much calmer lake back to the mouth of the river, we parked the boat and hopped into the icy, knee-deep glacier water. We were carrying our rods with good intentions of fishing, but just for fun we took a detour onto the muddy shore. The weather was in the upper 50s but pleasant enough with the waders and high-tech clothing that we were wearing.

With snow on the peaks behind us, the scenery was stunning. Even the mosquitoes were giving us a break.

Skip led the way up a trail in the weeds that ran parallel to the river. In several places the grass had been mashed flat by something large, and at one point I looked down at my boots to see what I was standing in, it was scat — bear crap! 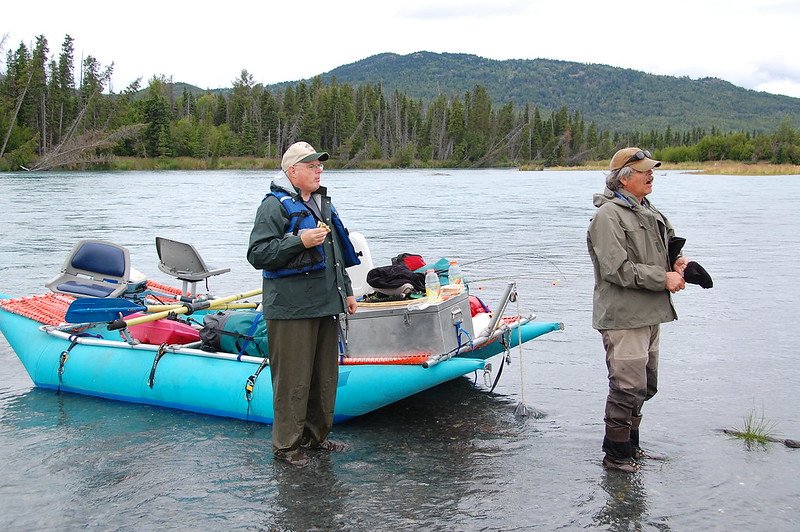 A very surprised Flynn Rodgers and Skip Matthews stand with their mouths open!

We were now standing in a bear’s living room. Any experienced Alaskan outdoorsman — Skip included — would tell you that doing so is typically not a good idea.

If this were a television show, we would have to satisfy the lawyers with a don’t-do-this-at-home-or-you’re-an-idiot disclaimer somewhere. Regardless, we pressed on cautiously through six-foot-tall grass that limited visibility to just a few feet.

Suddenly, Skip stopped and motioned for me to hurry. My heart began to race as Dad and I crept quietly forward up the trail. Sitting in the water was what I have been waiting for: a young brown bear. He did not know that we were nearby, so I positioned myself to get a better picture.

I was stalking a bear. 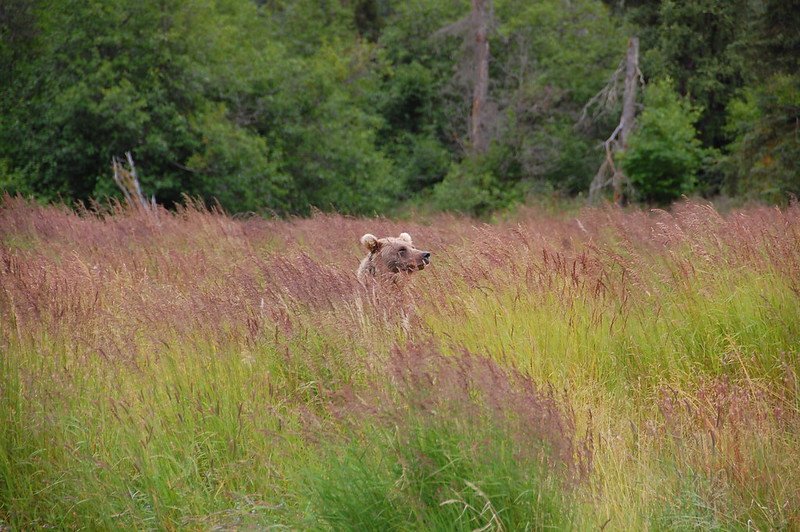 I am pretty sure he was looking for us at this point.

I held my Nikon SLR above the grass and did my best to capture some pics. Suddenly, in a moment of madness, I realized that the wind was blowing on the back of my neck. As a hunter, I knew what this meant.

Sure enough, the bear began sniffing around, and then without warning, stood to its full height — impressive to say the least.

He looked directly at us. When we met eyes, it felt as if those dark eyes were looking into my soul. Analyzing. This has to be the last thing a prey animal thinks as well before it ends up as lunch.

Suddenly, the fun and games were over. Some God-given survival instinct told us to get the bloody hell out of there. We beat feet back along the trail in the direction that we came from, toward the safety of the boat.

I was bringing up the rear as “tail gunner” we would call in the Army and kept a constant watch over my shoulder. Just as we were about to break out of the tall, brown, grass, Skip unexpectedly came to an abrupt halt. My heart leaped into my throat.

Any time an Alaskan outdoorsman turns around with wide eyes and says run, it can’t be a good thing. Dad and I turned around and scurried back down the trail toward the direction of the first bear!

Skip, our point man, had unexpectedly run into another bear. 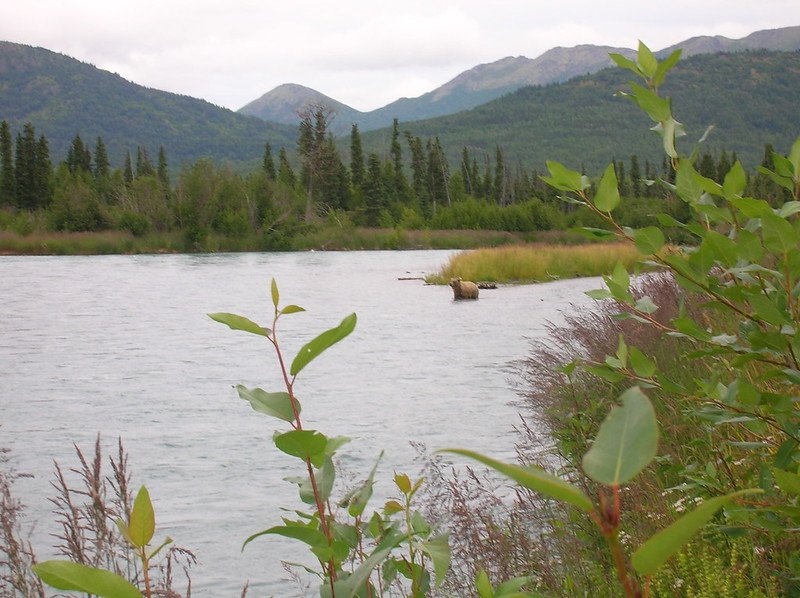 A nasty thought crossed my mind: Bears are not that social, and the first brown bear that we saw had been young. Was it possible that its mother was the bear near the boat? If so, that would have put us directly between mother and offspring — not good.

Dad and I had joked the entire trip about our different priorities regarding bears. He was carrying a noisy bear bell to scare them off. I, on the other hand, was hoping for the opposite

Wildlife encounters, assuming they are survived, are one of my favorite things in life. A couple years later, I would have the privilege and thrill of stalking Komodo dragons in Indonesia.

My wish for a bear encounter in Alaska had been granted and then some.

With hearts pounding and sweet adrenaline shaking our bodies, we waited for an eternity without speaking, then made our way back to the boat. It was still sitting on a gravel bar where we left it; that’s a good thing.

The bear(s) were gone. We slapped our high-fives, and began joking about exaggerating our encounter for the women back at camp. Wasn’t the bear seven, eight, no…12 feet tall?!

A victory lunch was in order, so after digging some soggy sandwiches out of the cooler, my pulse finally began to slow back down to normal as the recent events were processed. I don’t know what made me glance over my shoulder back at the shore, but I almost choked when I did.

There, in the tall grass not even 20 meters away (we walked it out) was a sizable brown bear watching us intently as we ate our lunch. His fur was waving in the wind, and his black eyes were very interested in what we were doing.

I do not think that he was aggressive, but more or less curious and annoyed that we were in his favorite fishing spot. Maybe he wanted a sandwich. 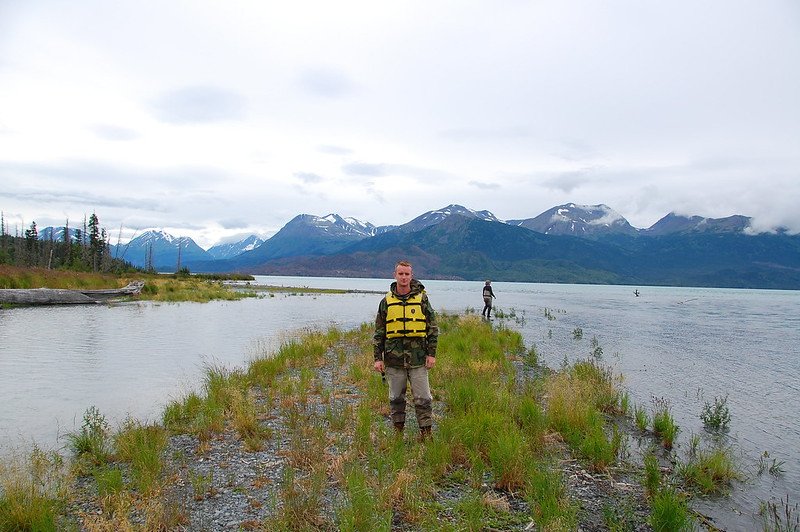 I threw my sandwich down and managed to grab my camera for a proper picture. Bone-crunching death is temporary, but pictures last forever, right? That is, unless the bear manages to ingest my camera as well. Always a grim possibility.

Good thing the Nikon lens had vibration control, because my hands were shaking like mad as I watched the bear come closer through my viewfinder. I snapped pictures in rapid-fire mode, then moved back behind the boat to put something between myself and this beautiful-yet-enormous animal.

The bear did not act very afraid of us at all, which is not good behavior. I also never acted aggressively, thank goodness. Most people don’t realize, but a brown bear can run at 30 MPH for short distances, the same speed as a horse! If he decided to close the 15 meters or so of distance between us, I would have had maybe two seconds of reaction time at best.

My mind clicked into survival mode; I eyeballed the heavy boat oar that I was prepared to grab if necessary. It wouldn’t have helped much. 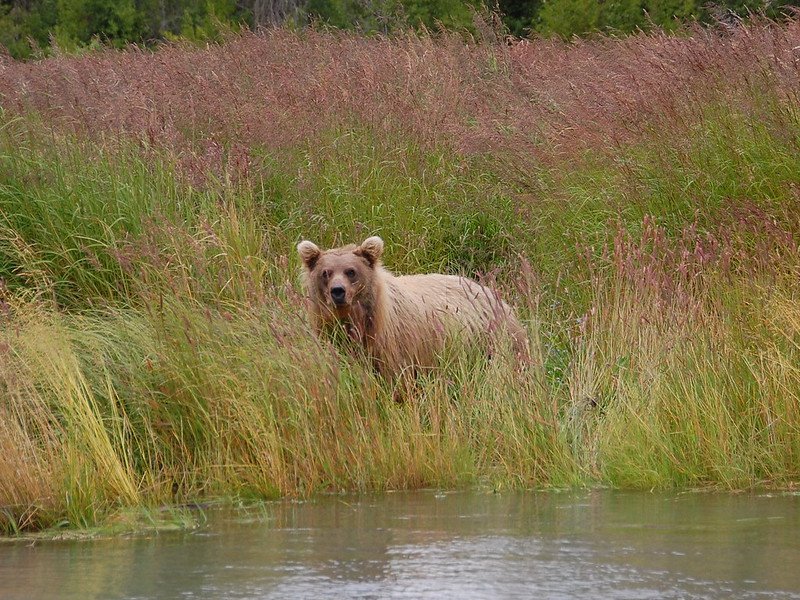 Getting Out of There

Fortunately, Skip and my dad, who had already retreated behind the boat, and were holding paddles. They banged the boat and made enough noise to halt the bear.

We waved our arms wildly to send the bear scurrying back into the tall grass. The bear did stop several times to stick its head above the grass and check on us, but having decided we weren’t worth the effort, finally lumbered back into the Alaskan backcountry.

We decided that even lucky bastards run out of luck eventually, so we shoved off and headed back into Skilak Lake. My heart was still beating out of my chest, and despite having two other witnesses, the moment still felt dream-like and surreal.

Most people see brown bears from the car or boat; not many can say that they had boots on the ground with a brown bear at such close range without a tragic ending. Usually the bear ends up getting shot or the human chewed on. Thankfully, neither happened today.

Skip agreed, that had the bears not had enough juicy salmon (they were running at the time) that the scenario may have turned out quite differently.

My brown bear encounter in Alaska couldn’t have gone better.

How to Handle a Brown Bear Encounter in Alaska

I’ll defer to the experts. The National Park Service’s Bear Safety guide is an excellent resource. You should definitely read it before heading backcountry in Alaska. According to the NPS, the color of the bear matters when determining what you should do.

When things go really wrong during a brown bear encounter, you should play dead. Lay on your stomach with hands clasped behind your neck to protect it. In theory, the bear will get bored and leave.

For black bears, the advice is opposite. Never play dead for a black bear. Instead, fight back like an angry badger. Don’t make things easy for the bear!