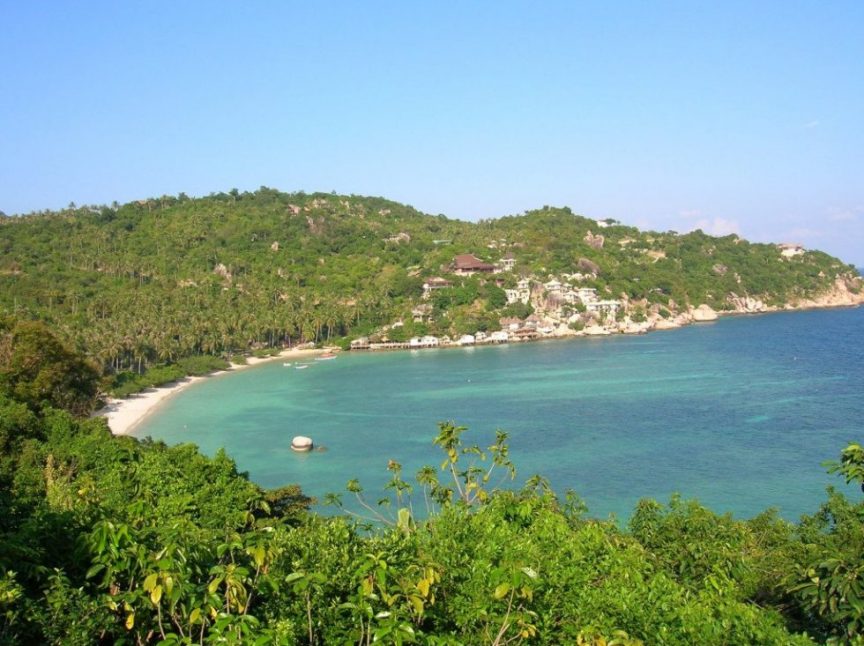 The first of the sharks appeared around 9 a.m.

Or perhaps they had been there all along, circling in the cloudy water around us. Who knows. The safety of the beach, the only dry, horizontal surface for a long distance in any direction, suddenly seemed that much farther away.

Another cold eye appeared out of the murky blue to my right, pupil fully dilated as it took a good look and sized up potential nutritional content. It then disappeared with the swish of a two-pronged tail behind.

The shark was just barely longer than I am, but I’m quite sure it possessed dental superiority. I caught a flash of working gills on a gray side as it vanished into the depths.

There was no need to tell Suus, my Dutch partner, about the sharks. She would see them soon enough. An underwater shriek behind me confirmed when she did.

I lost count. How many blacktip sharks were there? Eight, nine, ten or more? Typically nonthreatening sharks, yes, but being surrounded by curious creatures with teeth tends to make a person tense. They certainly had the home court advantage.

Actually, the blacktip reef shark is considered “potentially dangerous” by biologists. The frequency of human interactions leads to mistaken nibbles here and there. That doesn’t mean they’re to be avoided.

Even those lovable, hoop-jumping dolphins have been known to attack humans from time to time. And my cat probably has more confirmed kills than the average blacktip shark.

But, still. We were surrounded by sharks.

It all seemed so cliché. Yesterday, we had acquired a map of Koh Tao, Thailand, and immediately noticed how one of the bays in the south was enticingly named Shark Bay.

We asked a drunken divemaster about the possibility of sharks being found at Shark Bay, and she had confirmed: the bay was aptly named because it was lousy with sharks. In fact, the bay was some kind of nursing ground for reef sharks.

We were staying close to there on the island. There was no good excuse—other than the fact that it was full of sharks—to not get up early and go join the daily feeding frenzy at Shark Bay.

I learned on one of my several trips to Hawaii that sharks like to hang around and feed at the mouths of freshwater streams that empty into the sea. Prey ranging from small, furry rodents to full-sized pigs stupidly ends up being washed over the cascading falls, knocked senseless on the rocks, then dumped out into a vast, salty void much to the delight of a toothy audience.

This was the marine equivalent of DoorDash for lazy sharks. 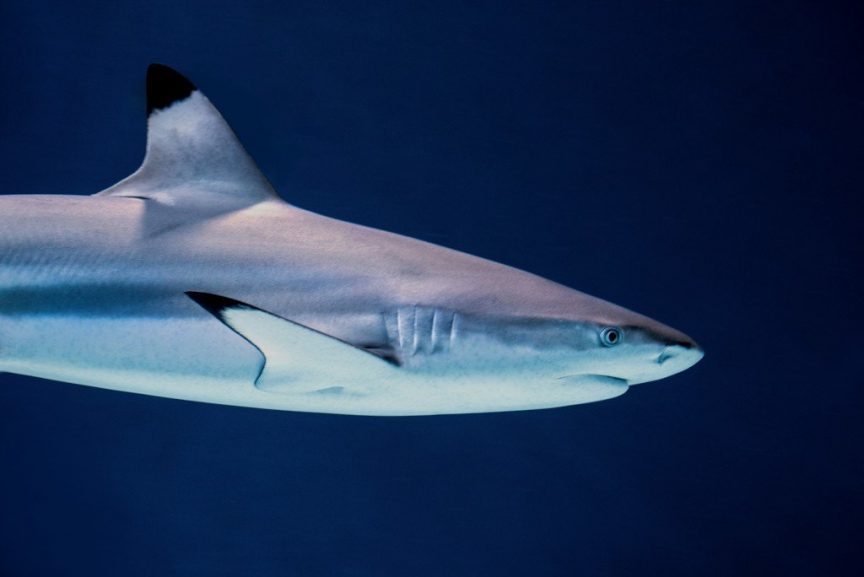 We weren’t exactly victims on this calm, island morning. In a moment of madness we had deliberately set an alarm then taken transportation to the completely undeveloped beach (this was in 2006). Next, we swam the exhausting 30 meters or so out to a bobbing buoy which marked the reef and waited for something to happen.

The mangy island dogs lounging around on the sand would be of little help to us if something did indeed go wrong. Is Shark Bay dangerous?

Everyone with a television knows that most shark attacks are a case of mistaken identity. Hawaiian bars are full of hanging surfboards sporting Jaws-sized toothmarks, donated by really lucky surfers who were mistaken as a turtle from below. Their gnarly stories thrust them into celebrity status in bonfire circles where strange dialects are spoken.

I did my best not to splash about frantically like bait, but the murky water wasn’t helping. Drainage from a storm the night before had turned the water around us into soup; visibility was only a couple of meters.

I really hoped these finned bastards could see better than I could. As far as I could tell, my floating torso and dangling appendages silhouetted by the morning sun looked like the juiciest turtle to ever hit the Gulf of Thailand. The sharks would soon be in a frenzy if they weren’t already.

The truth is, however, Shark Bay on Koh Tao is not dangerous. Assuming you can swim, your biggest injury will probably be a sunburn. Now days, you’re more likely to get kicked by a splashing moron on an organized snorkeling trip than attacked by a shark.

Humans Are Worse Than Sharks

Now, I know good and well that humans are far more dangerous to sharks than they are to us. In fact, more than an estimated 11,000 sharks die per hour to keep a bunch of morons supplied with overpriced soup made from mercury-laden shark fins.

The soup can cost around $65 per bowl and is purported to give a man back his gusto in bed. In reality, it actually causes sterility due to the high methylmercury content. That’s okay. Better that these geniuses driving sharks to extinction don’t manage to replicate themselves. Drink up, fellas.

But at this given moment, despite my species’ track record, I felt more like floating food. Who knows, maybe word of finning had reached Shark Bay and we were unwittingly presenting them with an opportunity for revenge. The ocean works in mysterious ways. Would they know I was on their side?

Blacktip sharks are mostly harmless and prefer to crunch through turtle shells for the gooey stuff inside. But that knowledge still didn’t calm nerves when the things began really coming in close. Every direction that we turned, we either met eyes with a six-foot-long predator or saw the tail of one swimming away in temporary retreat.

How many unfortunate pigs had last night’s thunderstorm really sent slipping and sliding to their doom? Was there enough breakfast bacon on hand to sate the masses?

I tried not to look like a pig. Or a turtle. Or anything edible for that matter. On the rare occasion that I had to surface and take my mask out of the water, I felt incredibly exposed. Black-tipped dorsal fins were continuously popping up then submerging around us. It was a ridiculous, exaggerated sight right out of Hollywood—but this was real.

How many sharks were below me in the blackness of this three-dimensional void? Occasionally one of Suus’ long Dutch legs would kick me and I would shriek into my snorkel. Luckily, she was below the surface and couldn’t hear my unmanly yelps.

The water was churning. All it would take now would be for one shark to make one fateful probe into human flesh by mistake. One accidental nibble, perhaps by a groggy shark or the dumb one in the bunch, would set the whole disaster into motion. The fiends would strip us to bits in seconds. Even the crabs would have trouble finding particles left to enjoy. No, a droplet of blood in the water was not what we needed at this particular moment.

The blacktip sharks, although still not threatening, were coming within touching range out of curiosity. Either one of us humans willing to gamble a finger or two could tentatively reach out and bridge the gap between prey and predator.

Both Suus and I agreed that each pint of blood in our bodies was potentially useful, so contact was never made between our species. Instead, we chose to flop around helplessly on the surface, cursing and chewing our plastic snorkels. Her white eyes bulged behind the glass of her mask, clearly asking: “did you just see that?!”

After a brief committee on the surface as to how magical this experience had been, and even how magical it would be to not make any travel insurance claims, a consensus was reached that we should swim ashore before things turned ugly.

All good things, when stretched beyond their elasticity, eventually snap into ugliness at some point. It was time to restore order to the universe and rid ourselves of these damned sharks.

Suus swam toward the beach first and I followed. Surprisingly, so did many of the sharks—right until the last possible moment. I saw them in the thigh-deep water. We may as well have been crossing the English Channel; it was the longest swim of my life.

Sadly, Shark Bay on Koh Tao is now developed with luxury accommodation. And if that wasn’t bad enough, a fleet of tourist boats go there to deposit dozens of snorkelers into the water like splashing turds. Is it even possible to still become surrounded by sharks at Shark Bay?

I have no idea if the sharks were tolerant enough to hang around. Or if they have a taste for this new breed of tourist invading their quiet bay. 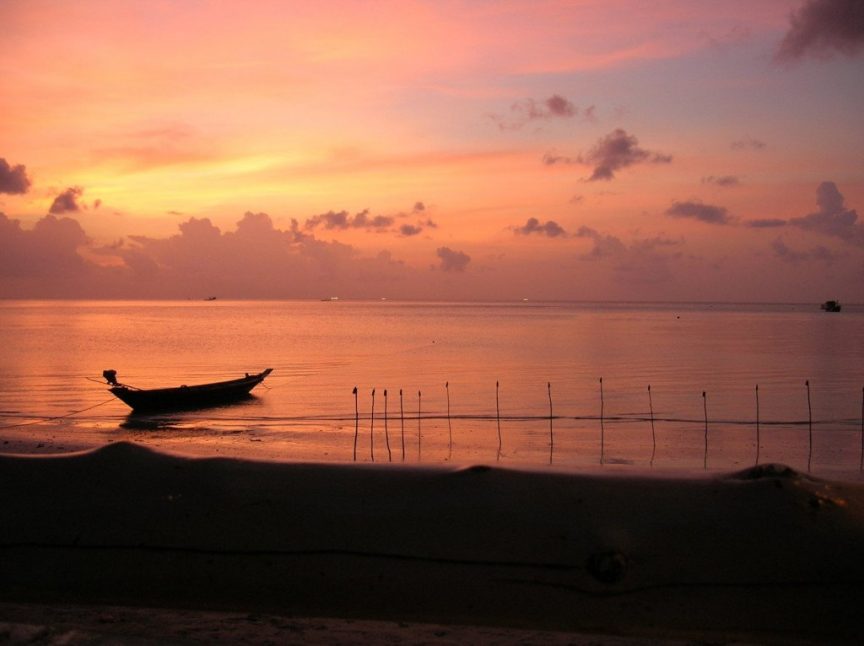 Previous Post: Escape From Corporate America: 15 Years of Vagabonding
Next Up: Three Days in Gatlinburg, Tennessee