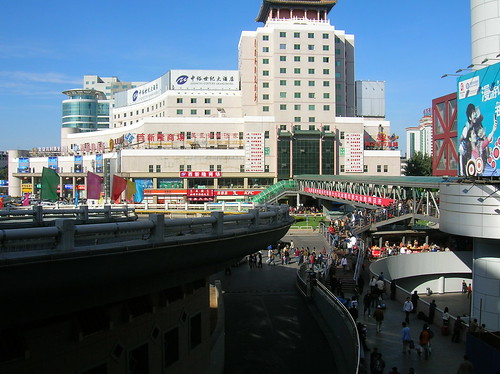 Having spent hours and hours alone in China, I realized that a voice recorder would be nice to have. It is kind of a tool of the trade for writer-wannabes anyway, and I have had countless ideas for stories and details slip through the loose fabric of my mind which I could have saved.

The best thoughts always seem to pop into my head when it is very inconvenient to dig for a pen and paper. Like while I am cycling around Erhai Lake or trekking in the mountains. Who knows how many potentially beautiful stories have vanished forever from the sticky corners of my gray matter.

That should say something about spending time alone outdoors, away from the usual distractions like people…and the internet. Of course, this blog doesn’t count, so read away and then go do something outdoors!

They probably make half the world’s electronic gadgets within 100 kilometers of where I am standing — the other half come from Taiwan, no doubt — so I went on a mission. Someone told me that there were electronics at the Beijing Pearl Market (which primarily sells pearls, go figure) so I hit the subway, walked about four kilometers, and within minutes I was walking up the stairs of the massive indoor market.

The three tour buses sitting in the front should have been enough of a warning.

When I walked inside, my fears were confirmed: every salesperson in the store was faithfully standing in front of their counters that were littered with unmarked goods. They looked like jackals, and I might as well have been a wounded rabbit hobbling in the door. The salespeople were nearly salivating on themselves and I could almost feel a hot, neon-green dollar sign pop up above my head. The place was filled with older European tourists — another sign that I was screwed.

The air reeked of fake plastic and rip-offs.

Luckily, I didn’t have to run the gauntlet long to find a nice selection of small voice recorders. Now I was the one salivating. The young girl behind the counter started the price astronomically high and then spun the oversized calculator in my direction. No problem: I’ve played this game before, so I countered with less than half of what she was asking.

She gave me a you-can’t-be-serious-look and dropped the price a mere 10 yuan! I worked on her — in Chinese and smiling even — for nearly 20 minutes and had barely lowered the price 10%. Even my walkaway tactic, which works nearly every time, didn’t work. I slowly marched away from the counter, expecting to hear her call me back, but there was nothing. Nothing but the sound of other cash drawers opening as tourists shelled out whatever price was asked without negotiating.

In some places, the vendor will literally be wrapped around your knees as you walk away.

Not here. This market is nothing but one massive tourist rip-off. Not really surprising, but I wanted to rant about it in case someone is bound for Beijing. Yes, it’s in the Lonely Planet, but give the Beijing Pearl Market a miss. Go do something else more productive instead, like feeding the pigeons in Tiananmen Square.

So, no gadget for me. Maybe Santa will bring me one if I get my letter in the mail soon enough. It’s going to be hard to find a Santa’s lap to sit on here in China or Thailand. Maybe he needs to get with the program and use email…or better yet…an e-commerce site equipped with a drag-and-drop shopping cart would be nice.

Are you listening Santa?

Previous Post: A Beijing Homecoming
Next Up: How Many Roads?