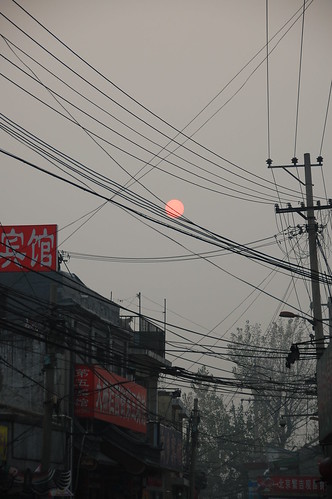 The fluorescent light above my bunk came on without warning and obnoxiously broke me out of a nice dream. I could feel the momentum of the train slowing, which meant that it was time to go to ‘work.’

I rubbed the sleep out of my eyes, and by the looks of the people packing up below me, I assumed that we were already approaching Beijing. I was told that it was a 42-hour train ride, yet my watch read 5:15 a.m. on November 5 — we were 12 hours early!

I threw my things together and jumped off the train into the cold, winter darkness.

For a change, it was not raining, but I was still dazed by sleep and had no idea where I was. I did not recognize the station as either the main Beijing Zhan or the West Train Station. I have used both. In fact, it looked like I was out in the middle of nowhere, with highways stretching into the distance in all directions! The air was cold enough to see my breath, but bearable. My boots were packed up, so I was already getting some funny looks in my flip-flops.

I tried to collect my wits and went out one of the many exits of the massive station. Taxi drivers waited ominously, but they were undoubtedly ripoffs and I was too semi-familiar with the turf to bite the bullet here. I walked to the bus stand and chose the busiest bus that I could see. At this time in the morning, it is a safe bet that all these people are on their way to work, which would be in a busy commercial area where I could orient myself better.

It worked. And as we drove deeper into Beijing, I saw a passage for the Metro, the Beijing subway. I pushed my way off the bus at the next stop and walked back to the entrance. I know the subway quite well, or so I thought, so I bought a two-yuan ticket and hopped on. I had to transfer once, but found my way to Tiananmen…the heart of Beijing, and China, it seems for that matter. 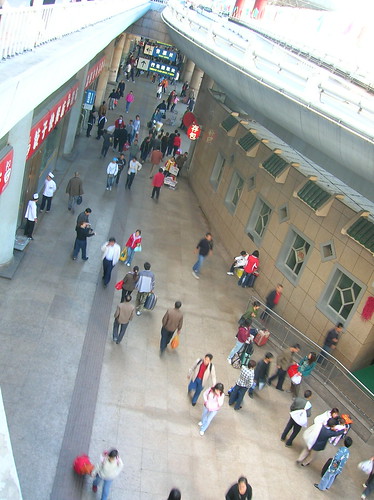 I can never remember if Dha Zha Lan, where my hostel is, is at the east or west end of Tiananmen. It was 50/50, so I took a gamble and lost. I hopped off at the wrong stop and had inadvertently added an extra 30 minutes of walking in the cold, beneath my rucksack, in flip-flops. Bonus! the good news is that I spent a grand total of three yuan (about US 40 cents) to get to my destination, rather than the expense a taxi would have demanded.

At first, the morning was so foggy that I could not even see the square to orient myself, so I did what I do best and just started walking. Soon, I could see the giant picture of Chairman Mao looking down from the Forbidden City and knew that I was at least going in the right direction. Vendors tried half halfheartedly to sell me useless junk along the way. I think the cold has taken some of the spunk out of their efforts. I’m glad.

The streets were almost deserted, which is strange for any time of day in Beijing. I rounded the corner and found the crowd; everyone had stopped what they were doing and were staring at the flagpole in the Square. Soon, the Chinese national anthem sounded loud and clear over loudspeakers and a color guard of about 30 soldiers marched out with the flag. I stood and watched as it was raised, which was in eerie unison with the sun on the horizon. And another day began in Asia. With the music, the flag going up, the soldiers saluting, and Mao keeping a close watch on things in the background, it hit me like a sledgehammer: 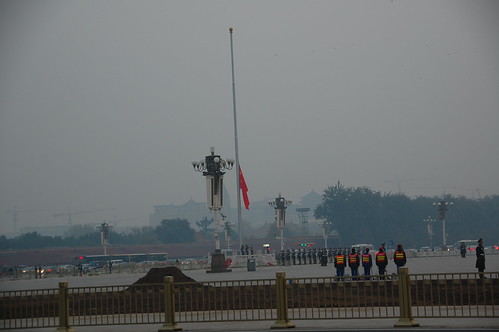 You would think that after three months I would have figured that out by now, but it is times like this one that you feel something grab you by the chest. Within minutes, the show was over and the 10,000 people who had been watching the ceremony hit the sidewalks, mostly in my way making it all but impossible to walk. Then it hit me again:

This is my third trip to Beijing and it felt good coming into a familiar place. Already, I can see the difference in friendliness between the people in the south and the people here, but I guess the same can be said about any country. Most people just seem happier in the mountains — I know that I am!

I arrived back at the 365 Inn but without much celebration. The people seem to get less friendly here every time I come. With all the money spent here, I should be a VIP of sorts, but I was denied even a loaner towel — and I asked in Chinese! (Wo xiang yi maojin, cheng). The 40-yuan dorm beds seem quite expensive compared to what I was paying in Sichuan and Yunan, but I guess you have to pay to play in the big city.

Despite my gripes, I really couldn’t have asked for an easier 2,000-kilometer journey across this sometimes insane country. I am home!

Previous Post: They Mostly Come at Night. Mostly.
Next Up: Beijing Pearl Market