Where Are the Bears? 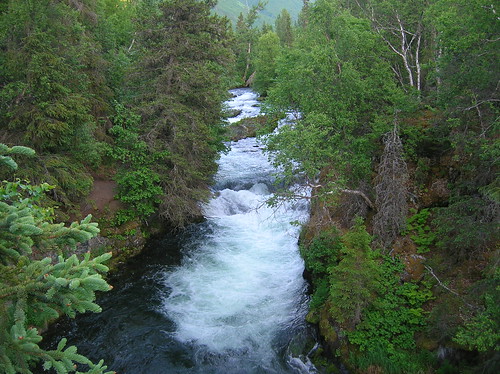 My legs burned and the gears on my mountain bike creaked in protest as I rode up the steep,gravel trail. I had a heavy canister of bear spray hanging on my belt — would it be enough to stop a determined bear?

I secretly hoped that I would get a chance to find out.

I had just returned from my float fishing trip, tired to say the least, but I decided that adventure opportunities wait for no one. So, I borrowed a mountain bike after dinner and began the two-mile, uphill ride to some falls where the salmon were running.

I was alone and reached the falls around 10 p.m. The sky was dim but there was still plenty of daylight. The trail was through the woods and deep in bear country. I had spoken to a couple campers at the bottom that were talking about a guy that was mauled here literally last week. Also, there was a plaque dedicated to someone that had lost their life here…to a bear. Everyone knows the bears come out late in the evening, so I was very watchful and on my toes at all times. To be honest, I was more interested in seeing a bear on the trail than the salmon, but unfortunately I never got my opportunity.

I finally reached the waterfalls and stood there in amazement as I watched huge adult salmon fish try to jump and swim their ways straight up a vertical waterfall to reach the pools where they spawn. They would try over and over again, slaves to their primal instinct to make it there and propagate their species. I watched for about 20 minutes, decided that I had lost enough blood to the relentless mozzies, and started back down the trail at full speed.

It was a hell of a ride on the bike, almost all downhill. As I flew around a gravel corner, I heard the jingle of bear bells. Hikers tie Christmas bells to their belts and dogs because the unnatural, metallic sound frightens bears out of the way. I barreled down the trail behind three teenage boys walking, bells jingling, and before I could shout a warning, they all three spun around in unison with a look of sheer, unadulterated panic and terror on their faces.

They had mistaken the noise my bike was making for a large bear running down the gravel path, and had no doubt, by the looks on their faces, pissed their pants in anticipation of the toothy impact.

I mumbled an apology, zipped back to camp, and went to sleep that night, dreaming of seeing a bear in the wild some day.