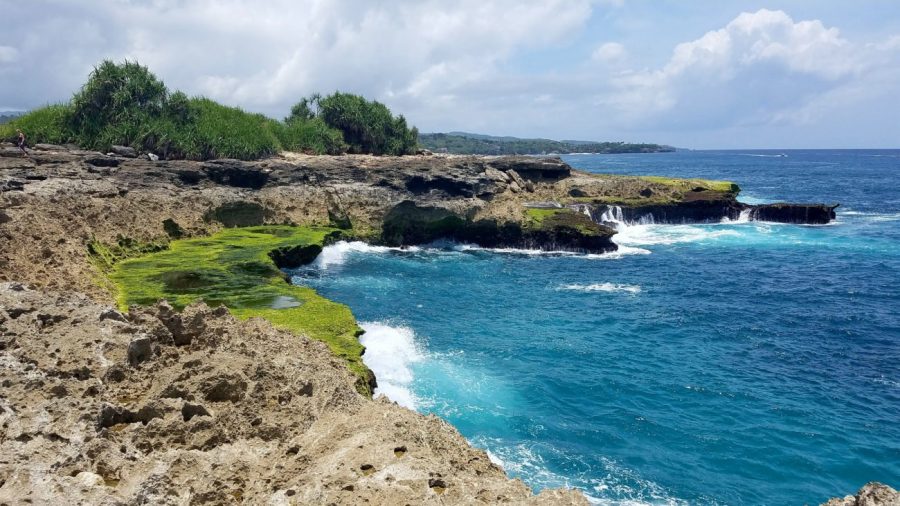 I knew exactly what to do when I hit the ground in Bali. After chasing Sumatran cows in the spring, and having a big Indonesian adventure last year, I assimilated back into the Indonesia groove easily enough. My limited Bahasa vocabulary even bubbled to the surface.

The 30 hours of flying from Kentucky had installed a hazy weather system in my brain, despite a surprisingly excellent United experience via Tokyo. We trampled timezones and datelines as I was hurtled 12 hours into the future.

The airport was easy enough to navigate on autopilot. Slumping in the backseat of a taxi, as vagabonds often do, never felt better. But despite the cognitive mist, I slowly became aware that something wasn’t right.

There was a strangeness afoot on the streets of Kuta. That tingly, arm-hair-raising, pre-storm, something-doesn’t-fit feeling has saved me from trouble many times. Somehow, I simultaneously dread and crave the intravenous cocktail of hormones and epinephrine that sparks such a feeling. Where does it come from? I’m assuming I was bitten by a spider in my bungalow at some point, for there were many, and obtained some of its survival sense. I credit the spider because my guardian angel opted out a long time ago, citing job stress as the reason, and now greets people at Walmart.

As I drank in the scene with the greedy eyes of a vagabond who has just spent several adventureless months at home, I discovered one startling difference from earlier:

Normally, Bali, the most popular island of thousands in a massive archipelago, the fourth most populous country in the world, is a madhouse. Turns out, people from all corners of the world like the idea of an exotic paradise bobbing around in the Indian Ocean. Who knew.

Kuta — the stop nearest to the airport — is the bottom rung in Bali, the black heart pumping ink and sewage. It’s the obnoxious guest who hits on your friends, vomits on your shag rug, and clears the party. Kuta is a place where living, biological beer kegs plod along the sidewalks without shirts, rotund limbs flailing and clutching for their 15th bottle of Bintang by midday. Men and proboscis monkeys, hard to tell which, bark at television sports.

But rather than the usual 24-hour circus of ratfuckery, Kuta was comparatively quiet. That is, I could walk on the sidewalk — a rare luxury in many places on this island. The scene was eerie.

That was a month ago. 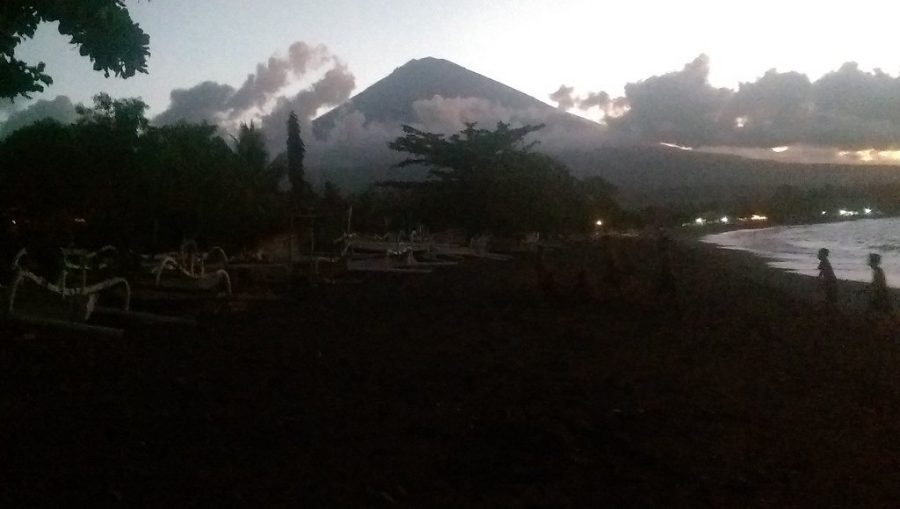 Hell, even I was getting a bit concerned before coming. Not enough to change plans, but I did go purchase a mask with filter — just in case I got stuck here for a while. As a kid, I watched how “clean coal” killed my grandfather slowly with black lung; he was in bed for a decade. Any dust — or ash — made of rocks doesn’t have a welcome place in my pulmonary machine.

Mount Agung is playing games with everyone. The alert level is still at the highest possible [on October 29 the alert level was lowered to “3”]; over 120,000 evacuees are roasting in temporary shelters. Rainy season is approaching, so conditions won’t improve. The volcano does produce hundreds of seismic rattles a day, but I’m too far to feel any. Who knows when it will blow; geologists are baffled as to why it’s taking so long. But unlike the catastrophic eruption in 1963, everyone seems to be ready this time.

But the slump in tourism will certainly hurt Bali regardless. Embrace amor fati and don’t cancel your trip! 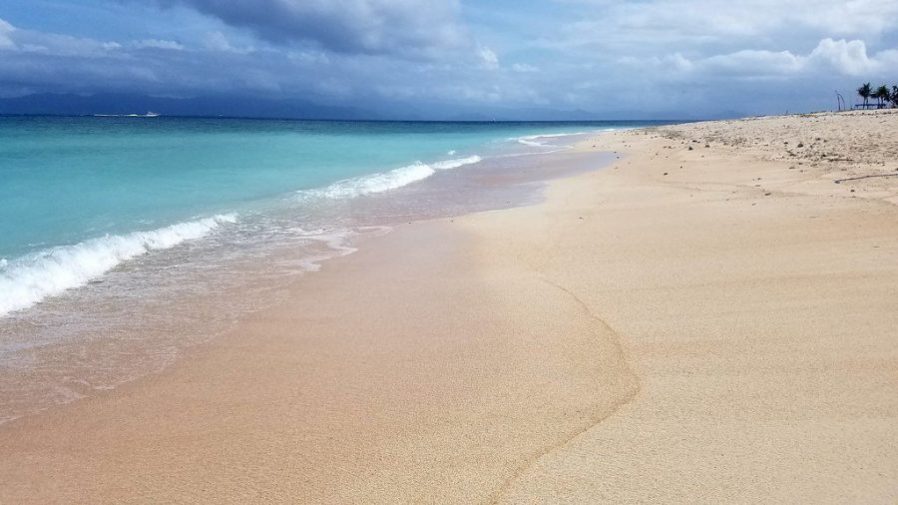 After a few days on Nusa Lembongan — a small island not far from Bali — wrestling with what was quite possibly the last remaining 2400-baud internet connection in Asia, and making hair-raising motorbike passes on what are possibly the narrowest footpaths in Indonesia, I tapped out. The island did have some charms, but I never got chi focused.

On my first swim, I met a sea urchin. We didn’t get along. I’ll be taking his or her barb home with me in the ball of my foot. Nothing serious, but I am aware with each step that there is a large-diameter, irremovable splinter somewhere it doesn’t belong.

I struck out at seeing the giant mantas on a stormy snorkeling trip, the kind where people stealth vomit over the side of the small craft, then go back to pretending to be expert seafarers. At least, that’s what I did. The one ATM on the island didn’t work, so I had a believable excuse for not making a second snorkeling excursion. 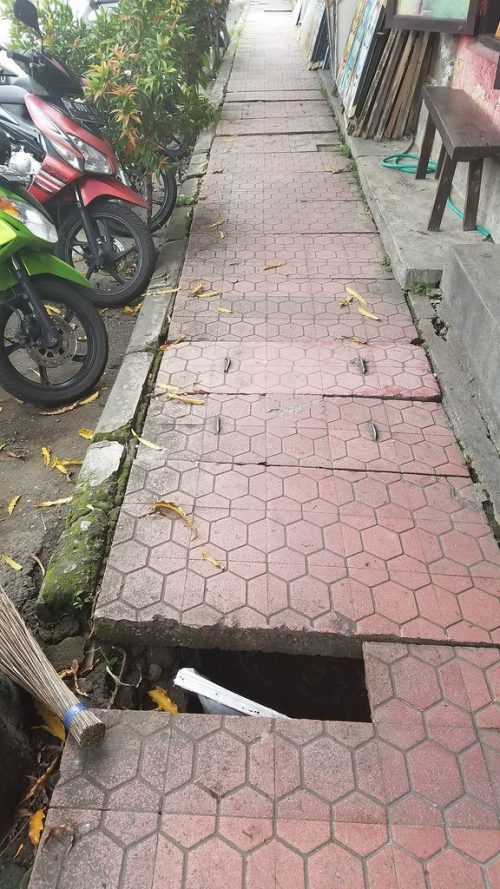 Accepting the manta mission as a failure was nearly as hard as accepting that I had just missed a whale shark while diving in Koh Tao back in June. I’d rather not talk about it.

Instead, I came to Ubud for good coffee, healthy food, mean macaques, and a writers’ festival this weekend. The festival’s focus spans art, poetry, and book writing, but I’m still on guard for influencers and bloggers, just in case. I didn’t have to set any traps; they were already in place.

What if Julia Roberts comes back to do more eating, praying, and loving? She won’t care for them. Obama and family were here in Ubud earlier this year. Did Secret Service men carry them around? [with a potential soundtrack of either this or this playing on someone’s Blackberry]

Despite the daily deathwalk, I’m very grateful to be back here.

The women’s poetry slam on opening night was a bold event in an impressive venue. Pierre Coffin, the co-director of Despicable Me who voices the Minions will be here Friday. The plan is to sneak away from whatever intellectual workshop I’m attending to elbow through a mob of kiddos for a photo. With my height and wingspan, they don’t stand a chance.

In a fit of volcanic curiosity, I hired a motorbike and drove to Kintamani, at the base of Mount Batur. I love being near, or preferably on top of, volcanoes. I was hoping to catch a glimpse of Mount Agung, but the day was too cloudy. Instead, I bought a $2 sarong I didn’t need. The wandering peddler thanked me many times. It literally changed her day. 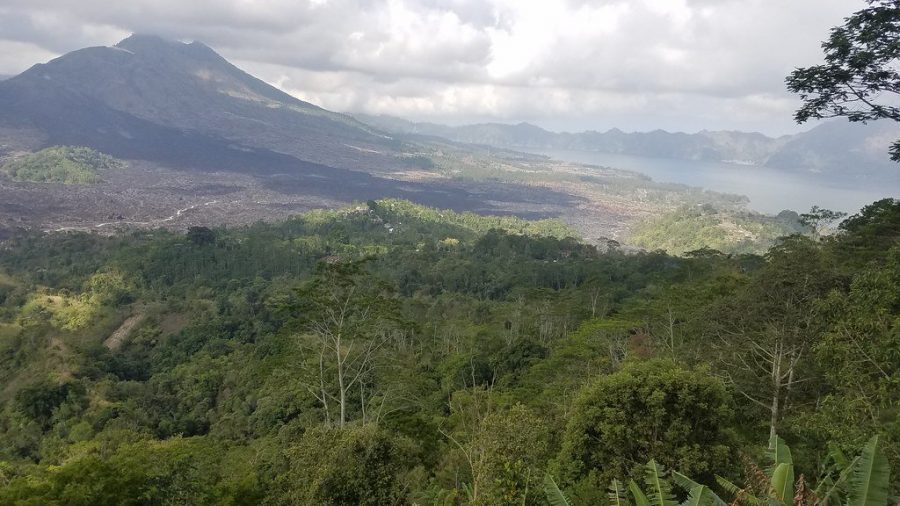 Along the way, a man in a uniform pulled next to me on a scooter and motioned me over.

It was the police.

Or so he liked to pretend. He was wearing a uniform with a badge, and he did produce an Order of Police ID card when I questioned his credibility. But I’ve been through this scam once, eight years ago; it’s a thing on Bali. So I hoisted the black flag and dug in.

He wanted to give me a ticket for the equivalent of US $26. He was miffed I didn’t have my passport with me. Feeling emboldened after noting that the faded Police sticker on the front of his motorbike had Harley Davidson™ beneath it, I pretty well told him in Bahasa I wasn’t going to pay. We could take it up at the station.

He then asked me how much I wanted to pay. I pretended to ponder this loaded question, then told him that today, I didn’t feel like paying anything.

He told me to go. I’ve already decided to create a playlist of getting-stopped-by-fake-police favorites, starting with RATM’s cover of F*ck the Police for any such future occasions.

One last — and very important — order of business:

I’m meeting Sallie Latch! Sallie is an 84-year-old woman who has been traveling or living abroad since age 18. She hasn’t let leukemia stop her, she has changed scores of lives with her refugee work, and now she’s coming back to Southeast Asia!

I first interviewed Sallie online back in 2010. She inspired so many people — particularly women who wanted to travel alone. We’ve been online friends since but haven’t met in person. I forfeited a flight and booked a new one: no more narrow misses. We’ll meet in Bangkok next week!

If you’re in the neighborhood, come meet a life-changing woman. 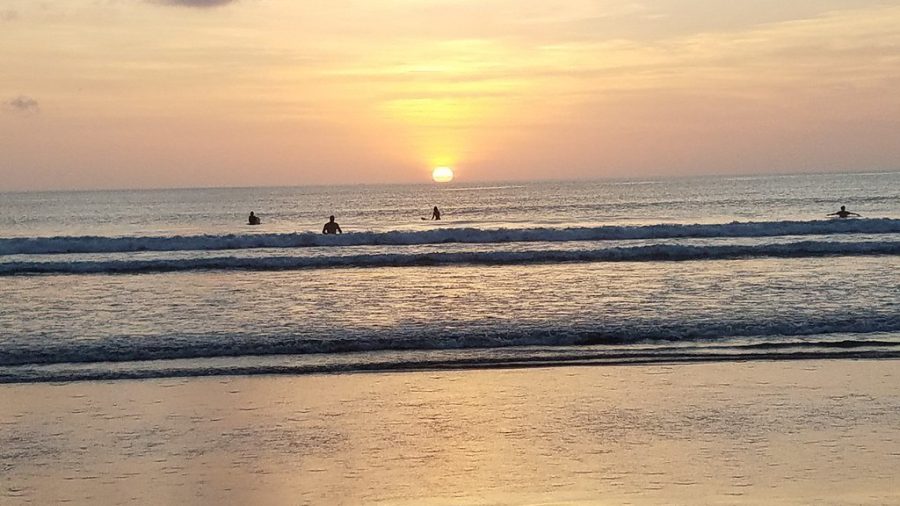 Previous Post: Vagabonding Resumes: Back in Bali
Next Up: 12 Years of Vagabonding