Backpacking in Vietnam: A Summary 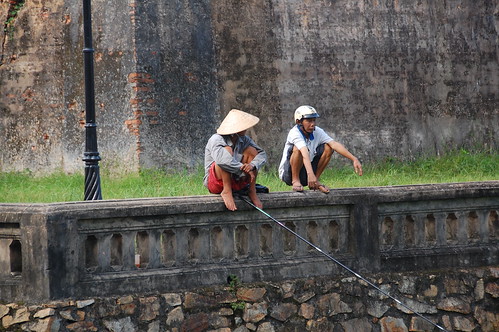 My 30-day visa for backpacking in Vietnam seemed to burn at both ends; such a short time is not even remotely adequate for exploring this huge, mind-boggling country. Regardless, I did the best that I could — even working my way north from Saigon to as far as Hue. Rampant monsoon flooding had roads and railways closed north of Hue, so I had to turn around and head south again.

I would estimate that it rained 20+ days out of my 30 days of backpacking in Vietnam. The lesson here? DO NOT go to Vietnam during the rainy season! Unlike Thailand where the “rainy season” is a minor inconvenience at best, the communist clouds above Vietnam do not play around. There were days and nights when the showers never turned off. Now I know what Noah may have been thinking.

Nonetheless, rain or no rain, I managed to see some interesting things and make some great new memories in my 28th new country. 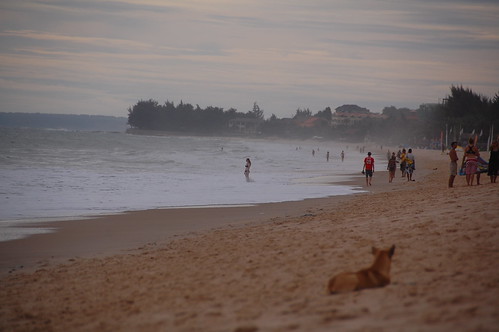 After a maddening week of motorcycles, red flags, and all the Ho Chi Minh (the guy, not the city) propaganda I could handle, one thing had to happen: I had to get away from the concrete.

With the highlands and the Mekong Delta being flooded to the point of disaster, I headed north four hours to the sleepy little beach town of Mui Ne.

Mui Ne is one spread-out tourist strip of resorts and development along a pretty decent beach; it’s famous for windsurfing. Fortunately, I hit Mui Ne at the bottom of the season so it was pretty much only the windsurfers and myself. Interestingly, half the signs in town are in Russian — Mui Ne is a popular resort destination for Russians.

While here I managed a meeting with Craig and Linda from New Zealand, founders of Indie Travel Podcast and vagabonding digital nomads. We’ve been corresponding online for the last four years, so it was great to finally make a real-life meeting. 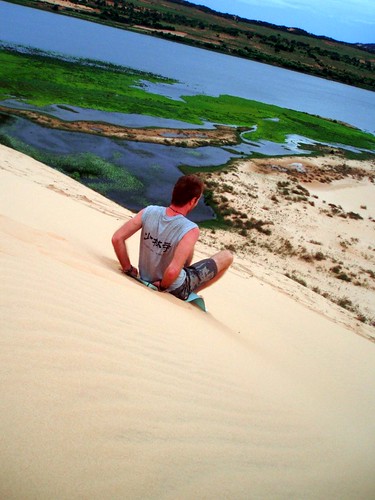 Windsurfing was just too expensive — and looked far too technical — to get my interest. Instead, I hired a motorbike and drove out to a set of famous sand dunes outside of town. Here you can rent a piece of plastic and do your best to injure yourself sledding down the dunes at high speed.

No injuries; although, it does hurt to fly off your plastic on the way down. I am still finding Mui Ne sand in unmentionable body crevices a month later.

I was also able to catch a small but delightful music festival held outside of town near a large lake. The Curtis King Band, comprised of American, Russian, Singaporean, and European members rocked the place. Such a multi-national band — the love of music truly does bring the world together.

One good beach deserves another, so I headed north to Nha Trang.

Nha Trang was once a popular place to take leave for American GIs during the Vietnam War. From movies, I expected sleaze and tease, but instead found a pretty friendly place. Granted, Nha Trang is a big city with more hassle than you care to handle, but the beach and waterfront park were clean, free of prostitutes, and actually pretty family friendly. 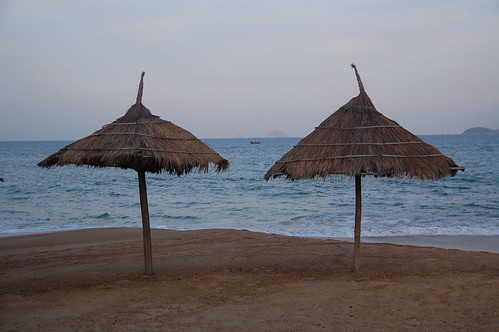 The truth is, although it may seem the case sometimes, not everyone wants to scam you while backpacking in Vietnam. I spent hours sitting on the waterfront just watching the local families enjoy some rare time away from work together. No one approached me for anything. 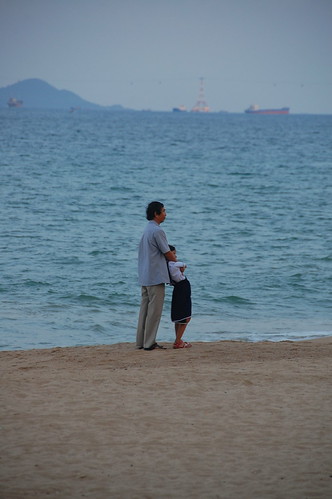 Backpacking in Hoi An, Vietnam

Maybe it’s some primal tendency, but unless forced to move, I will remain by the sea forever. Luckily, the beach isn’t nice in the rain, so the weather forced me north to Hoi An — a historic little fishing village turned tourist town. Hoi An sits on a muddy, brown river with ancient buildings and a UNESCO-stamped old town. It still manages to somehow retain its charm despite plenty of tourists. 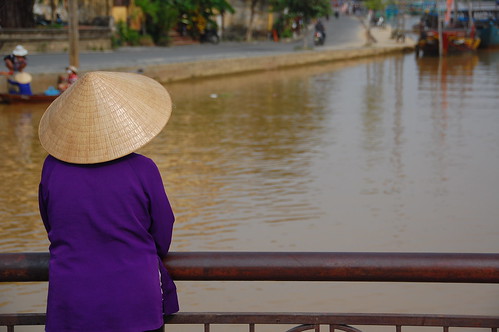 Hoi An is famous for custom-made clothing — which I have very little interest in — but there is enough fishing culture left to make the place interesting still. While I was there, the river overflowed the banks and into the streets thanks to the flooding farther north. This made for a nervous prospect considering that last year (2009) massive floods damaged much of the town. 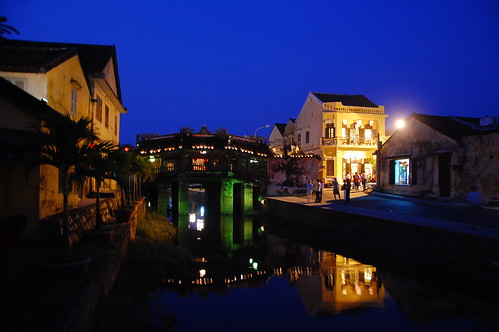 The famous Japanese Bridge above was constructed to connect the Chinese quarter with the Japanese community who pretty much ran the show back in the old trading days. During French colonization, they flattened the bridge to make it suitable for cars to drive over. 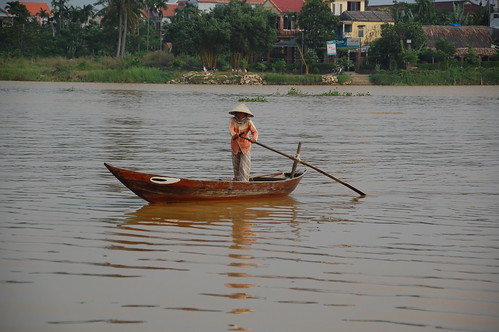 There was a small scattering of people backpacking in Hoi An (maybe because of the 25-cent local beer), but for the most part, tourists were older, shopping types. Eventually the goofy tourists — and hassle — got under my skin, so I packed up and moved north to Hue.

Last stop heading north for me, Hue — pronounced “hway” — was one of the places I was really looking forward to visiting while backpacking in Vietnam. A month-long battle was fought here during the Vietnam War, and the famous Citadel is reminiscent of the Forbidden Palace in Beijing. Hue is just a short distance from the old DMZ and the infamous marine base of Khe San — both of which I wanted to visit but the rain had other plans.

I hired a bicycle in Hue and braved the insane roads to cycle around the ruins of the Citadel. Seeing the ancient bricks riddled with bullet holes was both sad and fascinating. I spent over a week in Hue, going out to explore historical sites during brief lapses of the ever-present crap weather.

Perhaps one of the most interesting parts about Hue was seeing daily life still in progress. Unlike Hoi An which is too busy sucking on the tourism to look up, Hue is large enough that tourists are spread around. There were places in the ruins where I wandered without the distraction of people not smart enough to turn off the focus beep on their DSLR cameras. 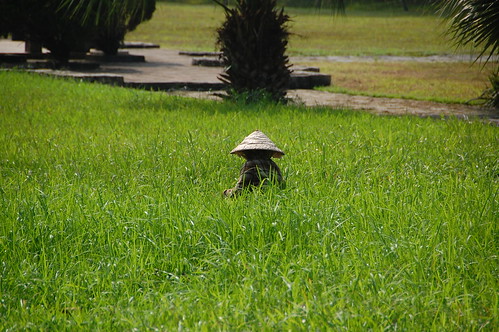 Literally anything and everything can be done with either bicycle or motorbike in Vietnam. 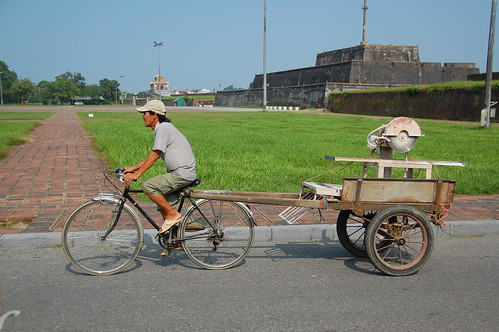 Backpacking in Vietnam was different. I barely touched this interesting country and will certainly return some day. With the rain and short visa time, I was barely able to scratch the surface on this trip. A return trip (next year?) is in order — a trip which focuses on the mountains, Saigon in the north, and the outdoor wonders that I missed.

I’ll leave you with a photo from Ho Chi Minh’s birthday celebration. 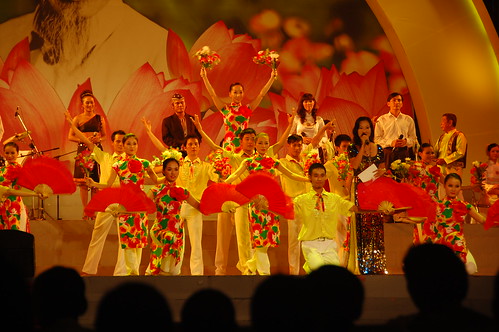