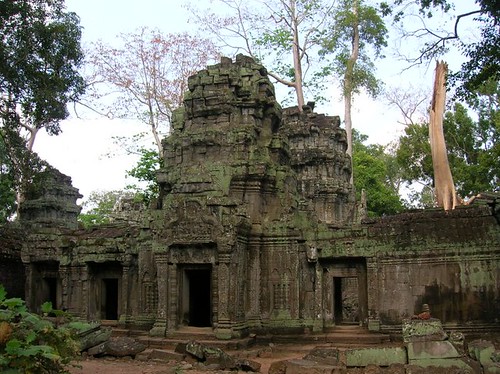 I don’t even know where to start writing about this man-made wonder of the world.

I’ll just post pics when I get to a country with better internet access and let you see. I met an American girl on the plane, so we purchased a three-day pass together to explore the temples and have been splitting the very expensive tuk-tuks there and back.

Today we took a painful 90-minute tuk-tuk ride out to a very remote temple and explored it in the jungle. We hired a non-English speaking “guide” for $2 at the edge of the jungle, pretty much just to avoid the landmines and keep us on the right trails. The temple is very much uncontrolled and unrestored, so we were climbing through the ruins and over statues that were over 1,000 years old!

Imagine having free reign on the Tomb Raider or Indiana Jones movie set. Huge vines and trees had split the temple to pieces, and huge stone blocks covered with intricate carvings were scattered about like they were kids’ toys. I did some good scrambling and got to the top of the temple to take some pics. Half this stuff belonged in a museum behind glass, and here we were sitting on it! It’s a pretty cool site that the French have not restored yet, I’ll post names and more information later. 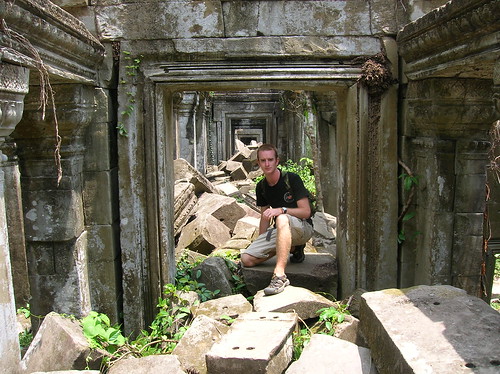 On the trip back the tuk-tuk driver got us lost, found his way, but we were still in the boonies. Then he managed to get a flat tire. We hobbled into a place where a guy could fix it. While the mechanic did his work, we walked across the street to a family “store” which was really just a few bags of snacks hanging in their garage. They were definitely not used to seeing farang tourists, so we were celebrities. 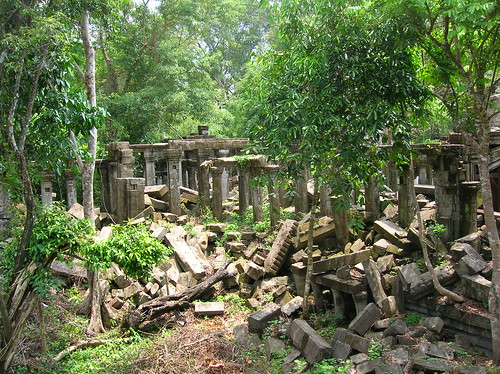 We arrived back to the main Angkor Wat site about 4 p.m. and hiked to the top of the hill to watch a sunset. The surrounding Angkor Wat area is like Disneyland in Cambodia. It’s bloody huge and very expensive. The place is a circus of vehicles, vendors, beggars, elephants, motorbikes, and tourists. I guess it’s just something you have to bear to gain access to these beautiful temple ruins that have stood for over 1,000 years.

Finished the day off hanging at the local Irish pub, which like many I’ve visited in Southeast Asia, wasn’t very Irish.

Previous Post: Siem Reap in Cambodia
Next Up: Vagabonding in Cambodia