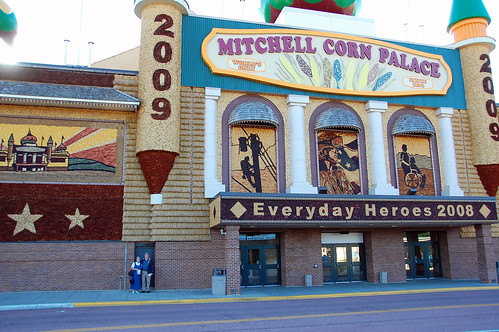 Update: We took another Great American West Roadtrip in 2014, and that post has way more thoughts and pictures.

I can sum up the first two days of our family road trip with one word:

I had no idea so much existed in this universe, let alone in between my state of Kentucky and anything remotely of interest that might lie West of here. As the miles and hours burned up two different time zones for us, the bug splattered minivan always vigilantly pointed west and humming along at 80 mph, we were greeted by only one thing for our stiff-necked, caffeinated efforts:

The only salvation from the ocean of amber fields on both sides of us (also known as Indiana, Illinois, and Iowa) was the occasional toilet break at a desolate rest stop or restaurant. Now I know what a survivor in a life raft drifting on the vast Pacific has to feel like. Our minivan seemed to be the last bastion of civilization afloat on a sea of grain and boredom. I know that places like this are a necessity to feed the world and that we would be hungry without them, but wow I’m glad that I’m blasting through as fast as possible. 🙂

Actually, there was one sightseeing stop to break up the monotony. As mile after mile evaporated, we started seeing billboards advertising the world famous “Corn Palace.” Yes…they grew so much corn they had to build a freaking structure out of it. While this sounds like my idea of a living Hell on this earth, one look at the glint in my dad’s eye told me that yes…we would be stopping at the corn palace…and you can pretty much guess what we would be seeing at such a palace:

At night, we stayed in towns that had four-digit populations listed proudly on their welcome signs. These are the forgotten places where weeds poke up through abandoned tires and old tractors go to rust. Even trains come here to die. Where was the classic Route 66 of my Hollywood dreams? Where were the small town diners, muscle car races, James Deans, and Marilyn Monroes? Maybe they were still out there…just buried beneath a sea of corn.

There was never any time, nor desire, to venture outside of the budget motels. A free continental breakfast was always gobbled up at a ridiculous hour in the morning, and we found ourselves back behind the wheel to burn up the miles toward our first destination worthy of me even turning on my camera: the Badlands. Let’s see them try to grow some blasted corn there!