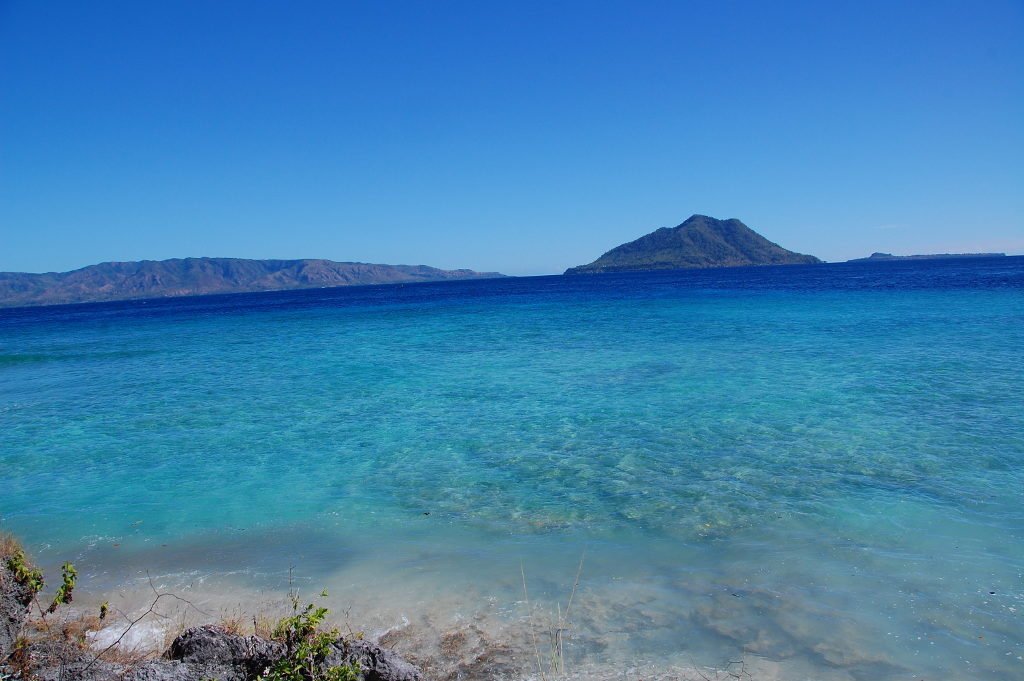 I sat comfortably on the bamboo platform beneath my two-story local style bungalow updating my journal and listening to the sounds of the waves smacking the rocks just a few meters below me. I could smell a cooking fire somewhere in the distance and tiny boats from the local village bobbed on the water trying to catch dinner.

Something got my attention. The snapping of a dry branch, a flash of brown movement, or maybe just…? I glanced up and nearly fell off my perch…

Standing just 30 feet away in the forest that backs up to my bungalow were three naked men My heart jumped as my comfort zone collided with reality.

My brain raced through a mental checklist…yes, I was in a Western-owned bungalow operation for travelers, but yes, there were three very indigenous-looking individuals staring at me from a close distance.

My eyes darted to their groins three times in disbelief and shriveled penises dangling confirmed what I thought I saw. The next realization was that they were armed with fishing spears. This was something I expected to see in Papua, not this happy little island I had planted myself on. These guys with their dark skin, flat noses, and protruding ribs had walked right out of a show on the Discovery Channel and were now standing within spear distance of me.

Luckily, even through the shadows of forest, I could see their yellow teeth.  They were smiling.

The Army calls it “situational awareness.” Whatever term you want to give it for travel, we do it all the time. After being on the road so much, subconsciously every new place is fed through some sticky blob of survival matter in the brains of travelers. In a split second, you identify threats to you and your bags, ways to get out, etc, just in case someone (or nature) later heaps a steaming pile of proverbial poo into your happy fan.

That wasn’t the case for me in coming to Alor Kecil. All I knew was that I had taken a very long 18-hour ride on a slow and crowded ferry from Timor to Alor.  From there a 45-minute motorcycle ride to a tiny motorized canoe carved from a single tree took me across to my new home. Looking at a map, I discovered that I am at the far eastern end of East Flores, with only Maluku separating me from Papua and eventually New Guinea, some of the last “wild” places on earth.

The men were obviously from the tiny fishing village that my bungalow shares the island with. Nudity on a birthday is usually a good thing, but this wasn’t exactly what I had in mind.

They trotted off on bare feet before I could figure out what to do next, so instead, I took my shirt off. Besides, the less you wear, the less you have to wash — laundry is one of the great thorns constantly in my side. I didn’t put a shirt back on for four days.

On my ferry over, sometime between lapsing into backbreaking naps under fluorescent lighting, I met Lina, a local girl, and her brother, Roy.  I had breakfast with them in the town of Kalabahi. They were on their way home to a tiny village in Flores. Rather than saying goodbye, they ended up accompanying me to Alor Kecil to provide some company for my birthday. I’m happy — they taught me a lot.

Roy brought a guitar, and despite the huge language gap, we had a blast and lots of laughs while swimming and watching nearly a dozen shooting stars falling above a black ocean. A birthday to remember! The sky here on the Equator is like I’ve never seen it: individual constellations are barely recognizable (including my beloved Orion) because they are so big and spread out. Unlike in the U.S., this is about as close to them as you can get with your feet still on the ground.

The French-owned bungalow operation, the only one on the island, is friendly, and seeing that there are no restaurants on this island, three meals a day are included in your price. Leave it to the French — the food is hands down the best that I have had since I left home. The lunches and dinners are family style, with large clay bowls spread across the table — everyone serves themselves. Every night, we eat freshly caught fish in some form, but it is always cooked differently and has yet to not be delicious.

A commotion earlier today turned out to be a man carrying a screaming and twisting young goat by the leg. It is a sure sign that we will be eating kamping (goat) for dinner tonight. Coffee and tea here are free, which is good. After months of being surrounded by the best coffee in the world, I have become a certified addict and am rarely too far from a cup of the brown nectar. My friends from the Gili Islands would even be happy to know that I’ve pretty much given up the local Thai Redbull thanks to the strong coffee!

There is no electricity here other than some sparse lighting provided by solar cells, and only enough fresh water for a small bucket or two over your head as a shower.

With no buzzing generators or motorized vehicles, the place is as quiet and charming as you can imagine. Even as a bonus, there isn’t a single mosquito to be found. I do share my bungalow with a giant wood-boring hornet with which I maintain an uneasy relationship, and a praying mantis who obliges me with some kung fu moves when I punch at it with a small stick. His defense really is quite good.

The bungalows are the local traditional style with an open bamboo platform forming the first floor which can be used as a communal space or for sleeping, and has a ladder through a hatch with a bed and mozzie netting in the loft for the rainy season. I slept the first night in my hammock, but after waking up shivering in the cool air coming off the sea, I opted to climb the ladder to the roomy loft for some warmth.

The only downside to Alor Kecil is the obvious lack of a proper sand beach.  Instead, the beach is just an expanse of foot-shredding dead coral (thanks to the fishermen who use dynamite and cyanide to speed things along) and sharp volcanic rock. They burn massive piles of coral, and it stinks. It smells like burnt hair.

I fought through dead coral barefooted again today to go snorkeling and have the oozing battle wounds on my feet to show for it. [Update: this would later prove to be my undoing]. I did see two small barracudas hunting and the usual assortment of reef fish, but still haven’t caught sight of one of the resident sharks the owner sees diving nearly every day. On one walk, I did see dolphins breaking the water, but they were impossible to reach thanks to the ferocious currents.

What is it with Indonesia and strong currents? The deep Indian Ocean swirls around these islands in Flores and Alor and can take you to Australia before you realize you’re in trouble. A little spooky, considering that I just drowned in Bali not too long ago! After what happened to me in Kuta, I still feel a little nervous about hitting the water completely alone, and here there isn’t a soul near the abandoned beaches to hear you yell for help. Luckily, there are no crashing waves ,and I would rather take my chances than to live in fear, which may rob me of an incredible encounter at sea.

Walking around the island is interesting in itself. I left literally the only set of footprints along the small stretches of soft sand. Bicycle-like patterns wove their way from the edge of the forest to the water and back left by snakes going out to cool down for a few minutes.

This morning during my swim, I felt the water change temperature rapidly around me. I knew what was coming and sure enough, I might as well have been riding an invisible conveyor belt in the opposite direction. The current was intense. I knew better than to fight it, saving my strength for whatever came next. After a hundred meters or so of heading helplessly toward another island, a new current literally grabbed me and took me back the opposite direction to where I had started! I opted to put my face down, snorkel, and enjoy the ride along with the other fish. What a ride it was.

Despite some new infection-prone cuts on my feet from the coral and seeing far more of the local men than I was interested in seeing, this has been the best birthday I could hope for while so far from home.  The vagabonding memories that serve as my gift can never go out of style or be stolen — they’re mine forever!

.
Previous Post: Back to Indonesia
Next Up: The Final Exam