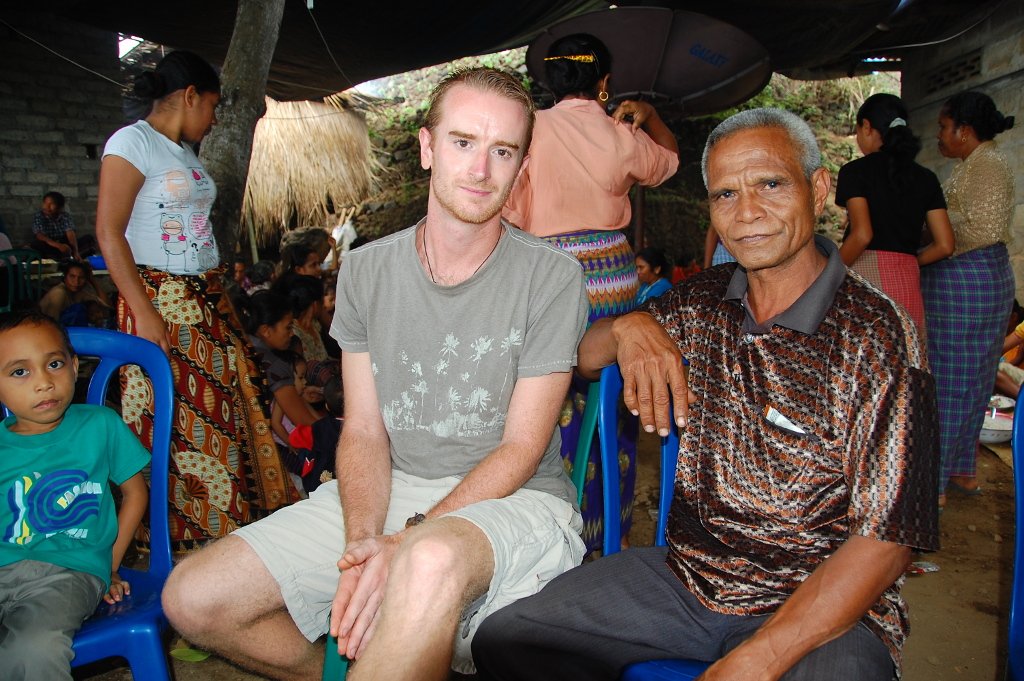 Every time I think I’m getting comfortable with life in Adonara, Indonesia, it baffles me with something unexpected. Last night, a screaming monkey came berserking out of nowhere while I was having dinner outside with Lina’s extended family.

The little monster jumped on top of one of her aunts who then spun around madly trying to get it off without getting bitten. Everyone else ran for their lives as the evil little bastard climbed up the support beams and scanned around for its next victim.

When it got within a few meters, I stood up where I was eating and picked up a big piece of nearby wood to club the damn thing, but one of the men put his hand up to stop me. I thought the monkey had come out of the forest, but it turned out to be the pet of a family member! The devil had chewed its way through the safety rope and was out for revenge for having been tied up. I guess I can’t blame it — I’m quite fond of escaping unpleasant life situations, too.

Welcome to my daily life in Adonara, Indonesia.

Just for future reference, monkey bites can be extremely dangerous. If one bites you, get to a town quickly and get it treated. Even if rabies isn’t an issue, the nasty bacteria can be.

Adonara, Indonesia, is sometimes called the “Island of murderers” (not exactly good marketing for tourism) because of a huge feud between families that lasted for years. As late as the 1990s, locals were still lopping off heads with machetes over a land dispute until the government intervened. They have enjoyed peace for years now, and it really is sad to remember this wonderfully caring place for something so negative.

Observing life on the inside of this traditional village as a friend rather than as a tourist is something that I will ponder forever. The friendly residents of Adonara have accepted my presence here, but I still get a fair amount of attention everywhere I go. I have yet to bring out my big SLR camera; I think I will save that until the upcoming ceremony, and I hate to take a chance of ruining the trust I am slowly building with the village residents here.

This afternoon, I helped Lina carry water from the distant well for cooking and showers. As we sat queued up to fill our buckets, the old women did more than their share of gossiping. Meanwhile, the young girls shyly made eye contact with me and giggled. I constantly hear the word lama here which means “long” in Bahasa Indonesia and then people touch their noses.

Turns out, a big, bony nose such as mine is considered attractive; the women here love mine. When I tried to explain that many Western people with my big nose would pay good money to have a surgeon break and reshape it, no one believed me. I got the same reaction when I explained others spend money to turn their skin brown rather than keep it white (some Asians prefer to whiten their skin).

Regardless, it’s nice to finally find some corner of the planet where people appreciate a serious nose when they see one. 🙂

I pitched in to carry water, but the others scolded Lina for allowing me to help. The large buckets probably weigh around 15 kilograms each. Then the men gave me funny looks for doing “women’s work” rather than something manly like sitting and smoking. Although the village is devoutly Christian, the paternal culture and treatment toward women reminded me of the Muslim islands not far from here. The women here work from 6 a.m. to midnight or later gathering firewood, carrying water, taking care of kids, cooking, and cleaning. They are always the last to eat or sleep, and I really feel for them. No wonder many of the local women choose to chew betel nuts for a mild buzz — they need some relief!

The men do their daily chore of climbing high into the palm trees with no ropes or protection, making cuts on the tree, and attaching buckets to catch the draining juice which will be turned into tuak (or mokay) later, fermented beverages. It is dangerous work but only takes a few hours. In the meantime, they sit, play cards, and smoke while waiting on the buckets to fill with sap.

I drink the unfermented milky white mokay every day; it’s a regular part of life in Adonara. Locals claim the low-power mokay is good for health. Technically, there seems to be more of it than safe drinking water, which has to be boiled and cooled before you can enjoy a glass. There are no shops in the village, no bottled water, and electricity exists only for a few hours at night.

The cooking at Roy and Lina’s house is done on a wood fire which has hardwood embers that are kept glowing in the kitchen fireplace day and night. A few bricks piled around it offer a flexible place to put pots or kettles. There is no refrigeration. Meat, vegetables, and leftover rice are all put inside a cabinet with a screen door to keep the flies out. I still have no comprehension of how they can store meat and fish that way for up to a week in the equatorial heat here without getting sick, but somehow they manage.

We have plenty to eat every day thanks to the ceremony. Since coming here, I have eaten vegetables cooked in the pig fat, lots of goat, fish (my favorite), fish head soup, and even some dog which tasted no better than it did the first time I tried it in China. The food is simple, but more importantly, there is plenty, and I am always expected to eat seconds and sometimes thirds. Vegetarians would be in serious trouble here!

Every night I shower using a ladle to scoop water out of the buckets and pour over my body. This is best done before the evening chill arrives. We’re high enough up the volcano for evenings to feel cool after scorching afternoons.

The floors are hard concrete, and the walls are made from gray concrete blocks. There is very little in the way of decoration other than some Christian items, and the only furniture consists of a few plastic chairs and tables — the same ubiquitous style seen at street-food carts throughout Asia.

I do have a very comfortable bed and room to myself for which I am very grateful. Someone was evicted to accommodate my stay. There aren’t even doors in the house; sheets separate the individual rooms from the kitchen. Roy and Lina both constantly apologize for their house being so simple, but I love it. They may not have a lot of things, but they do have one thing in their house that is missing from a lot of Western homes: love and happiness.

Lina’s father insists that I call him Bapak (father) as he has become my father in Indonesia. He hugs me every day and does his best to communicate with me. He even let me tag along one morning to watch the mokay process. I couldn’t believe how nimbly he can scramble up a towering palm tree. I grew up scrambling and climbing, but he could out climb me any day. He seems absolutely delighted to have me here and has told me to stay as long as I want and return as often as I want.

He is a very kind, loving, sincere man, and I believe the village is lucky to have him.

Today, I sat outside for a few moments with the village chief who turned out to be a very congenial, intelligent, gray-haired man dressed in slacks and a batik shirt. He basically gave the thumbs up for me to shoot photos at the big gathering tomorrow, and I promised to stay as low key as possible (not that it’s possible at all for me here!).

Permission was asked with Lina’s help of translating. Between our cobbled English and Bahasa, and her bridging the gap to the local dialect, an understanding was met.

Rather than approach me with any caution or suspicion as some leaders would, he told me that I was now part of the village and that for the next week my new name would be “Gregory Bala Makin.”

“Bala Makin” is the family name here, and it was an incredible honor having him tell me that. I thanked him (translated via Lina), and he picked up his sharp peda to go oversee the multitude of preparations for the festival.The peda looks like a small Kwan Dao (a Chinese kung fu weapon). It has a long blade fixed onto the end of a staff and can be used for “many purposes” as he told me. In other words, they were once used to lop off enemy heads.

I looked on in envy at the sight of him walking off with a sharpened peda on his shoulder. I really have to get myself one of those things!

Today was a local market day, there are two a week, so I walked down the mountain alone to try to buy something to offer Lina’s family in return for all their hospitality.

Every stall carried the exact same assortment of cigarettes, candy, and packaged noodles — finding a suitable gift was nearly impossible. Unlike Lina’s village and family, many of these people from neighboring villages stared or pointed at me in shock. The overwhelming attention made shopping around tough.

I bought myself some Ramen noodles in case something appeared on the table one night that I absolutely could not eat and then bought some vegetables for the family. Along the way I bought six huge oranges, thinking it would help keep everyone healthy with so many people coming in for the ceremony and bringing germs from different villages.

It turned out what I bought were gigantic orange-colored lemons. Who knew? I didn’t until Lina educated me.

Everyone who has traveled around Indonesia knows that Indonesian people eat more candy than anyone in the world. They love sweet treats, and a sour lemon is just about their worst nightmare. Candy is even used as currency in cash registers here. Seriously. It’s given to you as change when stores have no coins!

Lina’s “Mama” accepted my sour gifts with a slight grimace but appreciated the gesture I tried to make. Later, I ended up eating all six lemons myself because no one else would, ha!

There is a gorgeous beach here made up of smooth, volcanic stones, and at the far end, extremely fine black sand with big, polished boulders scattered around. I could have spent days on the beach, and like many times on this trip, my footprints were the first to cross the untouched sand that afternoon. I wondered if there would ever be bungalows here or even later, resorts.

I hope they never find it.

The big celebration starts tomorrow with over a thousand people expected to be in attendance. The tension is building, the women are cooking non-stop, the kids are excited, and the men are busy smoking double-time. I am also excited and apprehensive at the same time — but at least this time around I’ve had a little training leading up to the event.

Tonight I looked up at the stars poking down through holes in the clouds and wondered if anyone in the world truly knew where I was.

I’m not even sure myself.

Life in Adonara, Indonesia, is strange but good.

Previous Post: The Final Exam
Next Up: Whale Hunting in Lamalera, Indonesia