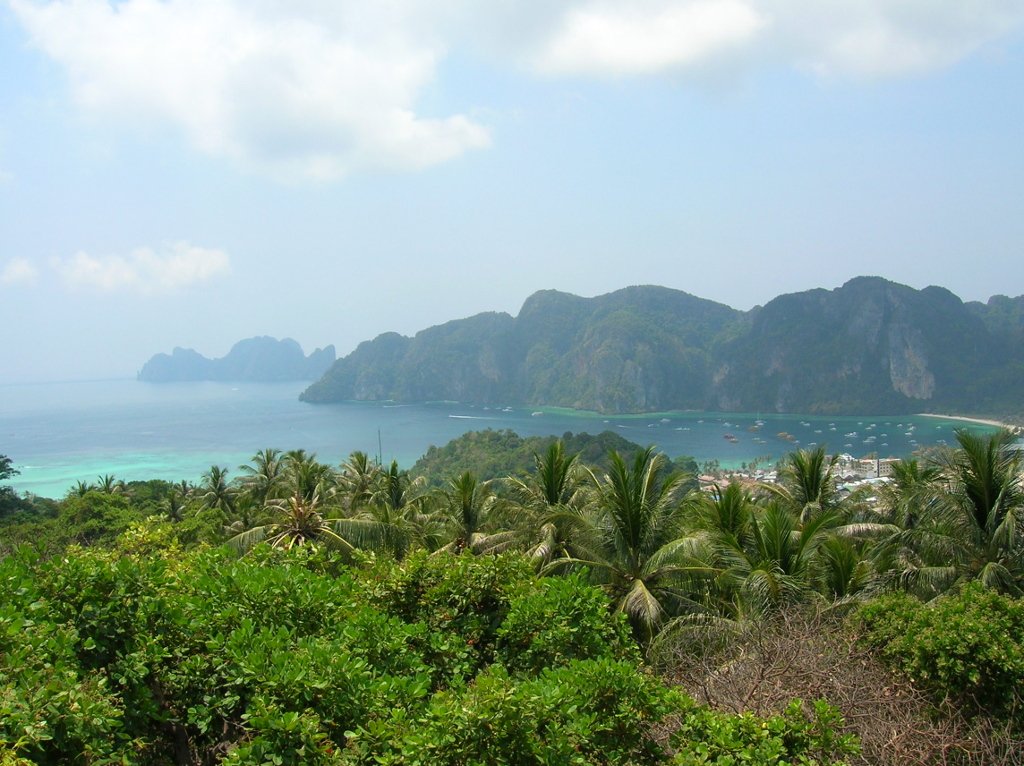 The road is my sweetheart, and today is our anniversary.

Exactly 15 years ago, I was getting on a one-way flight to leave the United States for the first time and begin my vagabonding life. After making an escape from Corporate America followed by three weeks of preparations and goodbyes, I finally slumped into a Korean Air seat unsure about the future.

Here’s the brief, original vagabonding begins post as it was published on Bootsnall.com’s network back in December 2005.

My virgin passport was still crisp with perfect pages not yet abused by sweaty immigration officers. My gravely overpacked Gregory backpack didn’t yet know the violent maws of a baggage claim belt. Somewhere at IBM Global Services, a gray cubicle—the place where I had spent most of my 20s—would remain empty.

I was a 30-year-old Rat Race escapee with no idea the gravity or true nature of my decision. Stuff was about to get real when this rat jumped off the table and hit the ground in a strange new environment.

The shovelful that hit my fan on the very first night in Bangkok was heaping. After getting out of my first Thai taxi, I crawled the perverse terrordome of Khao San Road at 1:30 a.m. and immediately realized I had made a huge mistake. I was lost, inexperienced, and bewildered. Drunk people of many nationalities were literally splattering the path to my first hotel with all sorts of bodily fluids. I saw blood (from a fight), piss, and puke in my inaugural 30 minutes.

If there had been a magical button to take me home, I would have pushed it and aborted the mission right then and there. This day would have been remembered only as a day of retreat. I didn’t like what I had seen lurking behind humanity’s long blackout curtains.

And so, in the first 24 hours away from my uncomfortable comfort zone back home, I learned a really useful lesson: The Unknown is a scary beast to face alone. Sure, I had faced it in Basic Training for the Army and at other times. But I had never before felt that alone and out of my element.

Sweating profusely in Bangkok’s early morning hours of January 24, 2006, I had nothing to help me but some travel gadgets and the tired brain between my ears. I didn’t even have a way to contact home until I sorted out the cryptic calling cards and Thai payphones. 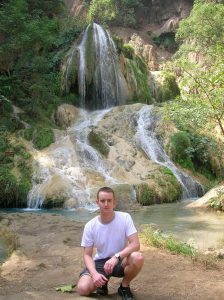 I knew a strategic withdrawal was in order. A couple days later, I walked into a local bus station and pointed to a map in Thai on the wall. The female attendant shrugged and sold me a ticket. To this day, I don’t really know if the ticket was for the place I actually pointed or if she just helped me out. Neither English nor Thai were spoken, but the outcome was fateful.

My bus was for Kanchanaburi, a little town four hours away with some cheap guesthouses strewn along the River Kwai. There I would meet a 19-year-old German girl who had been traveling on $5 a day or less for years already. She accidentally became my vagabonding mentor, and I had much to learn.

Getting out of Bangkok at the time was among the best decisions made in my life. I later learned to love the City of Angels even down to its last sewer rat, but at the time, Bangkok was too tall a hurdle for a jetlagged, suburbanite Kentucky boy far from home.

Kanchanaburi, close to Burma, was where the magic happened and my chi aligned. 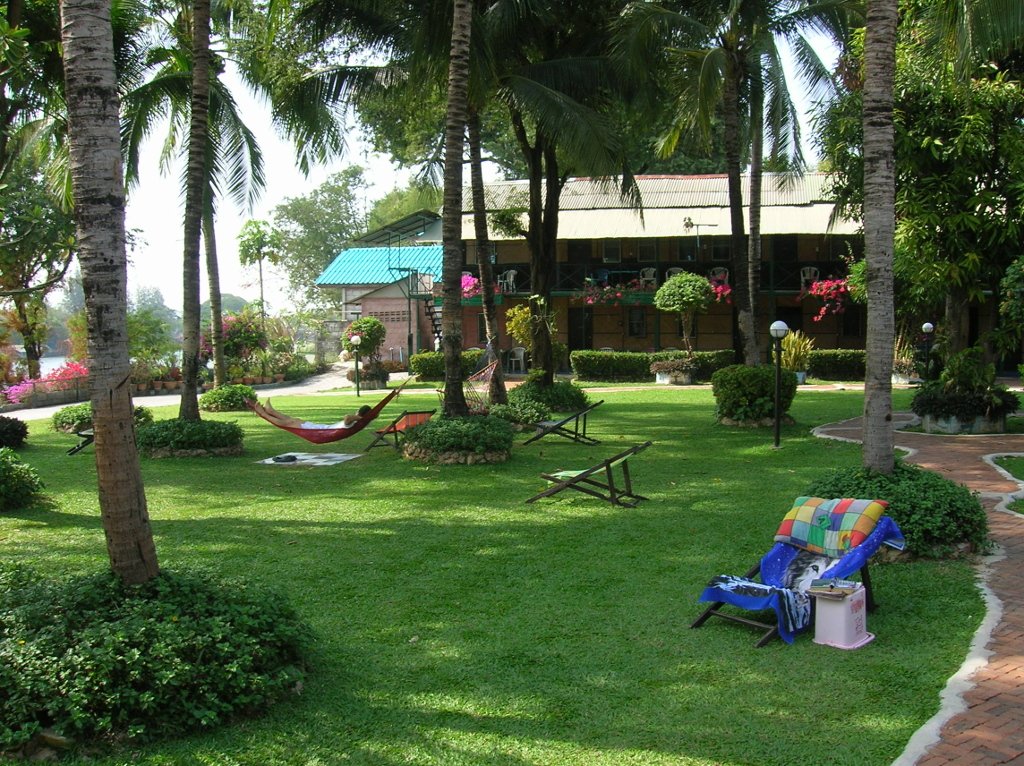 The garden at the Jolly Frog was where I got my vagabonding training.

I woke up one day with an epiphany: no one here knew me. What if I were to stop being the shy, introverted Greg that was so often reinforced by the environment at home? What if I were to embrace the moment and live a little harder than before?

No one would know any different. There was zero chance of running into someone I knew. There weren’t even any Americans. Many of the other travelers never bothered to learn my name back then. I was ambiguously referred to as “the American” for months because I was often the only one in a place.

Realizing I could become anyone I wanted was like a fiery strike from the hammer on my soul forge. I began to learn. Sparks flew more and more as my competency grew. The lessons and blessings became torrential. Time slowed and momentum built. I learned some basic Thai and how to negotiate. Lisa, the German girl, even took me foraging for fruit to save money. We picked our own rambutans for breakfast.

Although faint at first, I began to see the green code around me.

Rolf Potts, in his book Vagabonding, really drives home the idea that vagabonding travel, in all the ways it is wonderful and painfully challenging at the same time, is the ultimate catalyst for personal growth. I learned firsthand how the road is a metaphysical place where anyone—not just a geeky, reformed engineer like myself—can hack and experiment.

I discovered that reality is malleable. It can be hammered, shaped, and improved.

The time had come to hoist the black flag and get down to the wonderful, terrible business of building a new life. 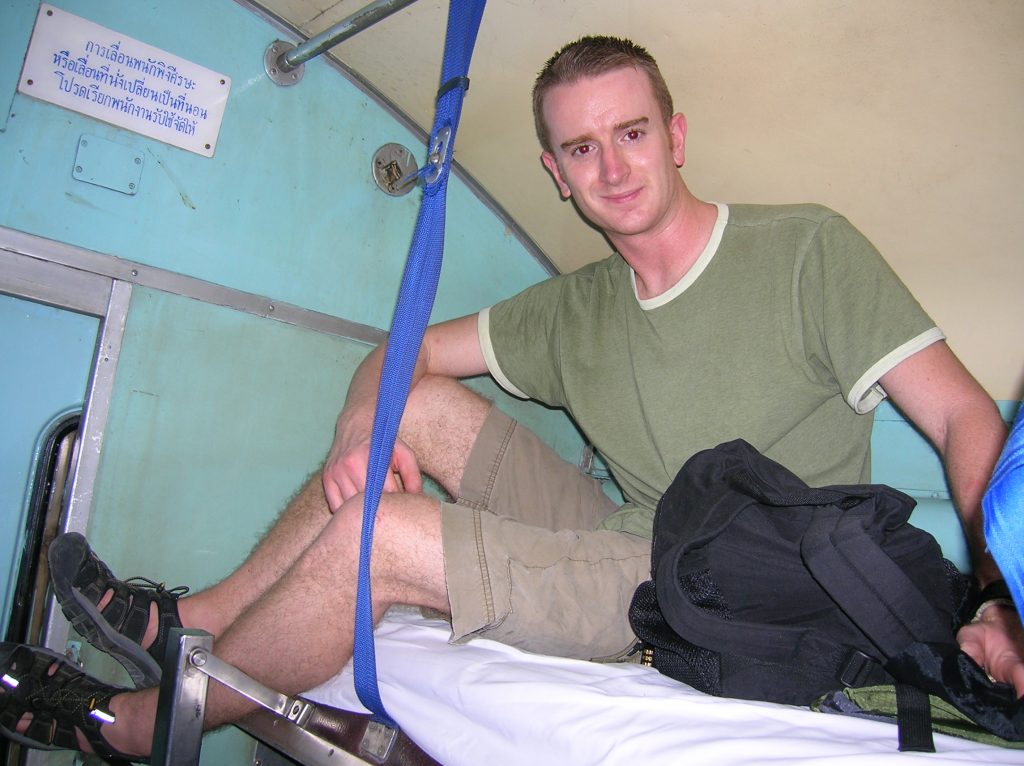 I used to write a summary of my vagabonding year each January 23 to celebrate the anniversary of my new life. Some posts were better than others. The line between gloating and inspiring strangers is a thin one. I lost the ability to discern it. Does a person weathering winter in a corporate cubicle really want to be reminded they’re missing out on something? Do they need palm-tree pictures and island brags thrust in their weary faces?

As of now, I haven’t left my state of Kentucky in 13 months. Winter is clawing at my window. I’m paler than Neo was when he awoke from the Matrix. Nothing pisses me off more right now than seeing people frolicking in Southeast Asia or places currently out of reach. Opening Instagram is just asking for trouble; I don’t do it.

Now days, I open my old travel journals instead. I’ve beaten the keep-a-travel-journal horse for 1.5 decades, but seriously: KEEP A TRAVEL JOURNAL. 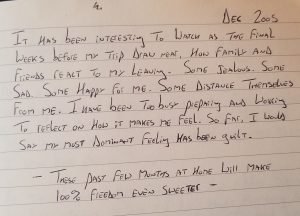 On Keeping a Travel Journal

Rereading my first journal is terrifyingly voyeuristic. It’s better than any Netflix show. I cringe when the main character (me), so naive at the time, has no idea how things will work out. Even a mediocre journal yields so many lost names and memories. It also provides a stark look at just how much our memory skews events over time. We embellish or selectively forget things as years tick by. Nothing like seeing your own handwriting completely contradict what you thought was a truth from the past.

No excuses. All world travelers end up with interminable waits at some point in bus stations and airports. Put down your phone (unless you keep your journal on it) and scribble down some stuff you think you’ll remember forever—because you won’t.

Besides, you may need some notes for writing one of these pandering pandemic vagabonding anniversary posts one day. 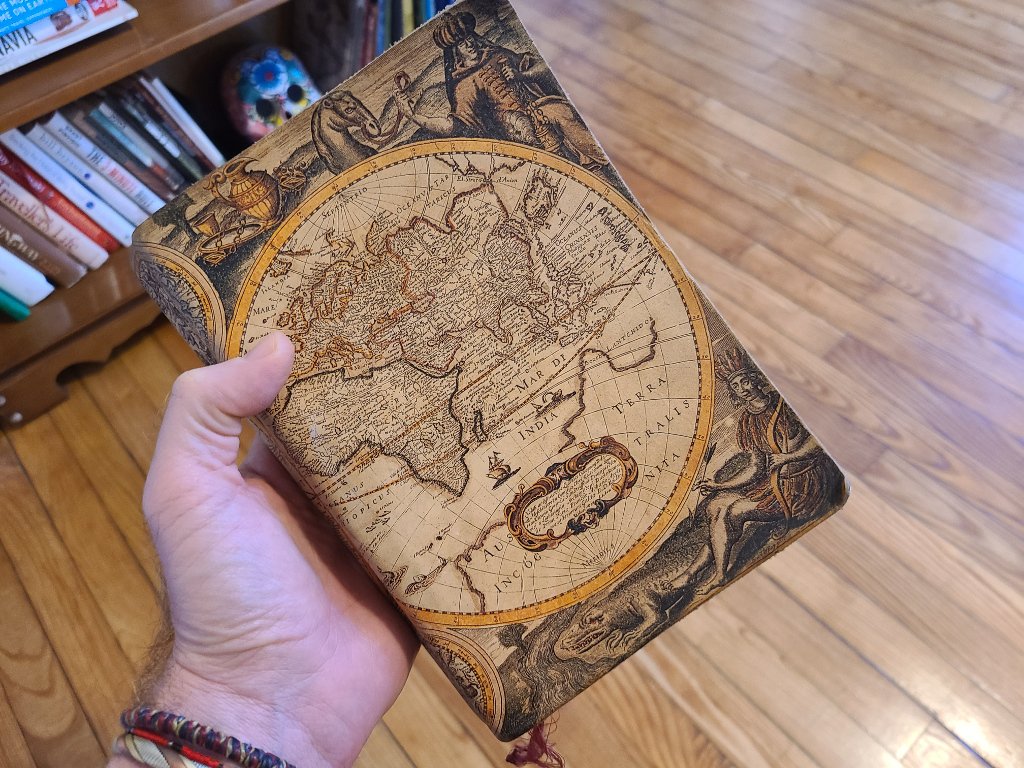 On January 29, I wrote “It feels like I have been here a month.” Actual time in country: five days.

Later that day: “Even though I am 9,000 miles from home, I see families that are very much like us…just trying to make it the best way they can and be happy.”

On February 12, three weeks into my first vagabonding trip, I wrote, “Only three weeks in and I’m already addicted to adventure travel. This is my new life…I need to find a way to succeed at it.”

On March 3, “As I live in this bungalow, I feel myself going through changes. Good changes. I still feel my old ethics and principles; however, I see now that we don’t need much to survive.”

By March 5, I was completely sold and knew I had started a new life. “This is my new life. I will train, study, learn, develop, and grow. Travel always. This first trip was only an experiment.” 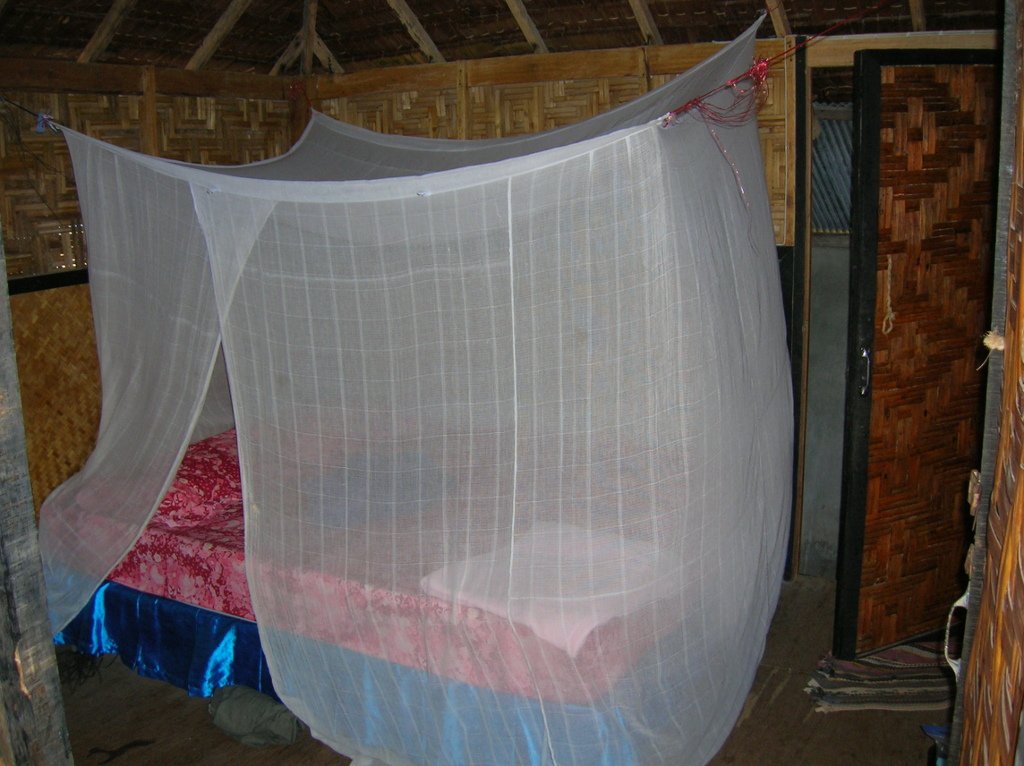 One of my first bungalow homes.

For many years, I ended a lot of my blog posts with “life is good.” In hindsight, I probably should have chosen a catchphrase that wasn’t also a T-shirt brand. The sponsorship never came. But the idea was to end blog posts on an upbeat note. Now, I believe the phrase to be inherently flawed. There should be a little asterisk next to it with some fine print beneath.

* I believe life can be good, but only when we choose to make it so.

Escaping Corporate America or a miserable corporate cubicle is no guarantee for happiness. Neither is becoming a millionaire or billionaire. All sound good, of course, but happiness is a choice to be made. Actually, it involves scores of little choices made along the way—with along the way the key phrase here. Happiness doesn’t arise from the success reached at the end. Instead, success comes from choosing happiness along the way.

Psychologists think we potentially make around 35,000 small decisions a day—that’s probably a guess. But of the multitude of choices you make a day, how many are in the right direction? Each of those tiny decisions is like a single pixel that makes up a much larger photo.

I choose to be happy.

Thank you for reading. And when nature allows, here’s to 15 more years of a vagabonding life. 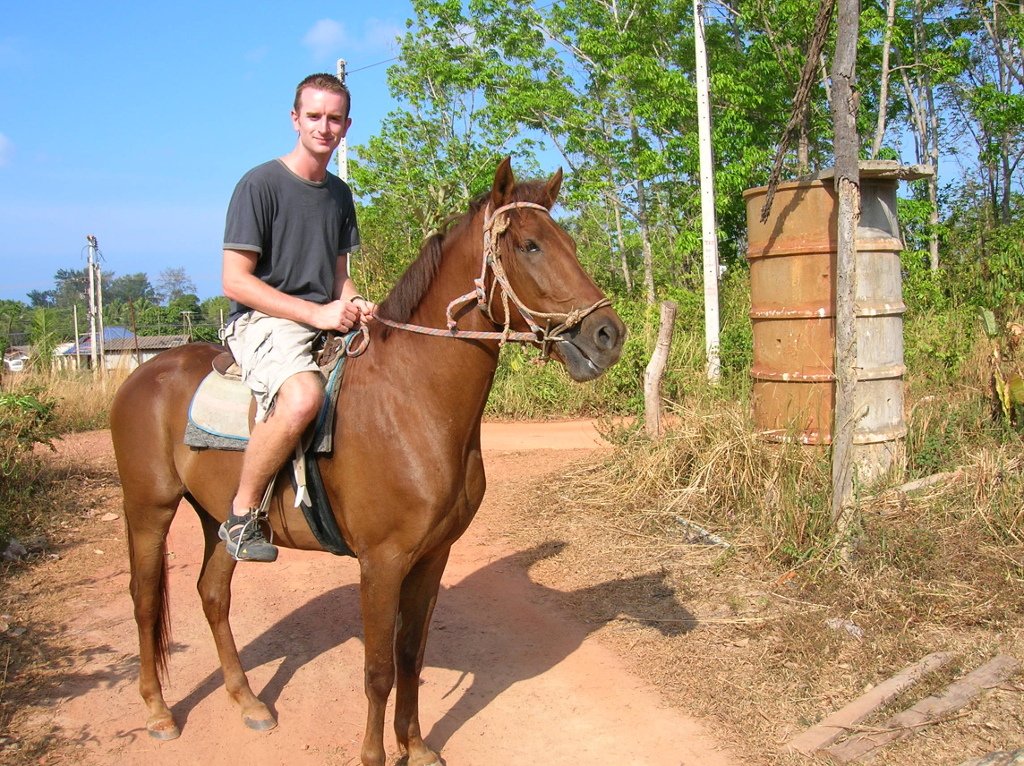 Getting this picture of myself riding a horse on the beach wasn’t easy. Here’s the story.

Previous Post: Ubud or Canggu in Bali: Which Is Better?
Next Up: Shark Bay on Koh Tao, Thailand